When I first saw a Clipper Cafe weekly menu on my graphic designer colleague’s desk, I thought perhaps it was a side project she worked on. But as I thought about it more and one day the designers all came back with fantastic-sounding catfish lunches complete with extravagant fruit tart desserts, I started to think otherwise. A Google and Urbanspoon search for the quaint-sounding establishment turned up no informative hits and the results were dominated by an Australia restaurant with the same name and not the unassuming cafeteria in Toronto. Clipper Cafe is for “those in the know” and when the search results were so paltry, well I just have to help correct that!

The very idea of a weekly menu posted so you can plan your week of meals of course tickles my fancy. Another forum website indicated that the people who work in the Bank of Nova Scotia building housing Clipper Cafe can access the menu over their intranet but the rest of us pick up a copy in a wall-mounted document holder at the door.

My colleague tried to describe to me how to access the elevators from the PATH but it was far easier to exit my building at street level and walk half a block to the old Bank of Nova Scotia building (not Scotia Plaza) at 44 King Street West (at Bay). I brought NPY on my first foray to the cafe and we were impressed by the old school beauty of the bank. I only snapped this shot in the foyer because I was nervous about taking photographs in the actual bank. The interior is bright with the white marble counters and huge open areas between the different banking areas and a massive old-fashioned four-sided clock hangs from the ceiling. To find the correct elevators, we followed the crowds of non-Scotia workers who were also headed to the Clipper Cafe on the fourth floor. Once we exited the elevator, it was also easy to locate the cafeteria. It was not by smell but by following the hallway with increasing density of brand promotional and historical displays heralding Scotiabank’s international reach, long history, string of mergers, and sponsorship in sporting events.

Like the cafeteria at Ikea, you pick up a tray outside the large room and slide it along the metal track, serving yourself with single-portions of dessert from the display fridge if you should want that as part of your meal. Then you can wait in line for the hot entree station or wander around to the grill station, soup stand, salad bar, or sandwich station.

The first time around, NPY and I got a grilled whole trout with rice and vegetable side. We got the whole meal deal with a slice of black forest cake ($1.00 on its own) and a canned pop and it was just $7.95. My colleague warned me that the trout came with the head which is not foreign to the likes of us but still a little crazy to see. I also picked up a caprese “panini” made on something like rye bread at a reasonable $3.99.

The trout was moist and a decent foot-long length including head and tail. I don’t usually get involved when we go to dinner and a fish is served whole but between me and NPY, I will be the one hacking apart the fish and deboning it! It was a nutritious and filling hot meal. The Black Forest cake slice was good, very moist dark chocolate cake and light and fresh whipped cream. The panini was disappointing, average at best.

I was back last week and, being alone, I had the time to take photographs. Between the most attractive choices of chicken Alfredo and fish and chips, I went for the latter. My plate is missing some french fries although I hadn’t started eating because I lost some in the beverage fridge when I tipped my tray and food into it by accident. I grabbed the second last dessert in the display case which is all that is left on a sunny Friday at 1:25pm.

Besides being a total fan of fish and chips, I loved my one piece of whatever-it-is fish that was moist and fresh and surrounded by a crisp and fluffy batter. I polished off the fish, fries, and coleslaw very well. The dessert turned out to be some kind of caramel cake with some pieces of apple, spiced with cinnamon and nutmeg and topped with custard and caramel. I wasn’t a fan after a few bites, despite the molten caramel in the center layer and just scraped off the caramel and custard. The whole meal was just $6.95. 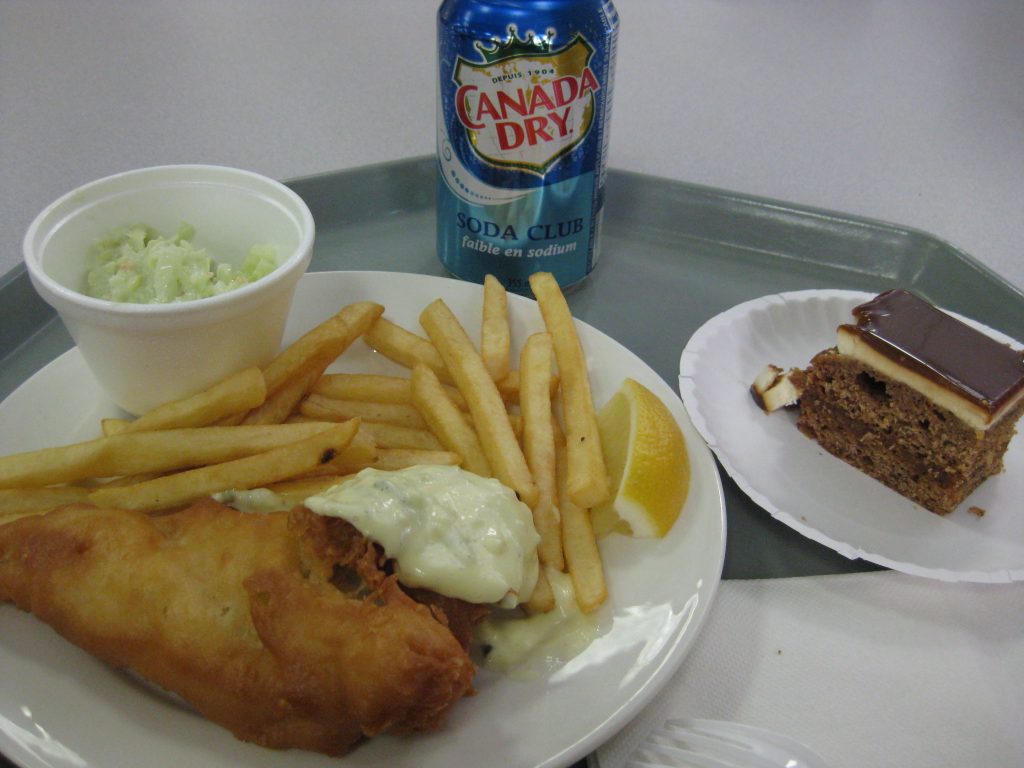 The pricing model for the meals also gives you a lot of choice. At the grill station where I got the fish both times, I could get the entree alone or with the dessert and drink. At the hot entree station (like if I got chicken Alfredo), you can get the chicken Alfredo alone or with salad or with salad and dessert and drink. You can pick what you need to fill you up on a given day and no complete meal is over $8, making it a really good deal in the downtown core.

I just had to go back today because the dessert listed was lemon layer cake and the entree I would get was quiche. I love quiche.

To ensure that I would get the dessert of my choice, unlike last week, I took early lunch and the place was crowded when you go for noon lunch! Yet I didn’t see any lemon layer cake (only a lemon meringue pie seemed closest) so I got the chocolate cake which I thought was Black Forest cake like the first time but had Oreo pieces upon closer inspection. I asked that the server not empty the quiche from its pie pan onto my plate and chose to have vegetables instead of a salad.

I also figured out that the beverage choice was not limited to pop but extended to milk which complemented the cake nicely. The quiche was not horrible but almost industrial–solid and not fluffy, dominated by olives and not sundried tomatoes. All this for $6.50! 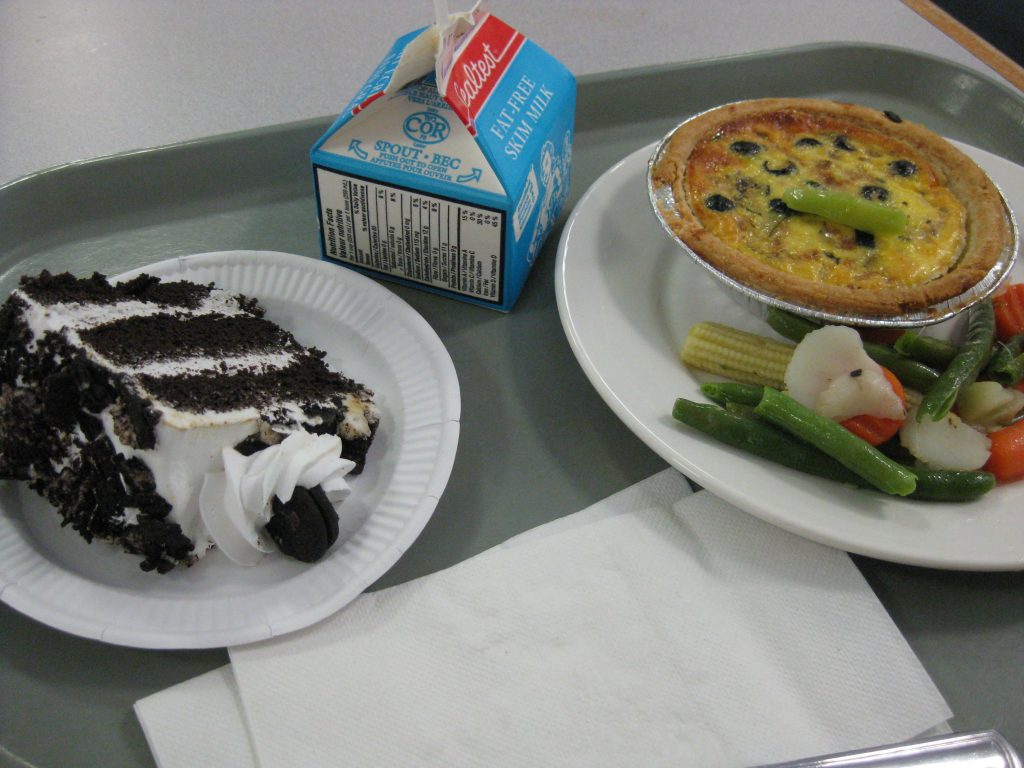 Edit: More Clipper Cafe meals – apparently I like getting fish there. 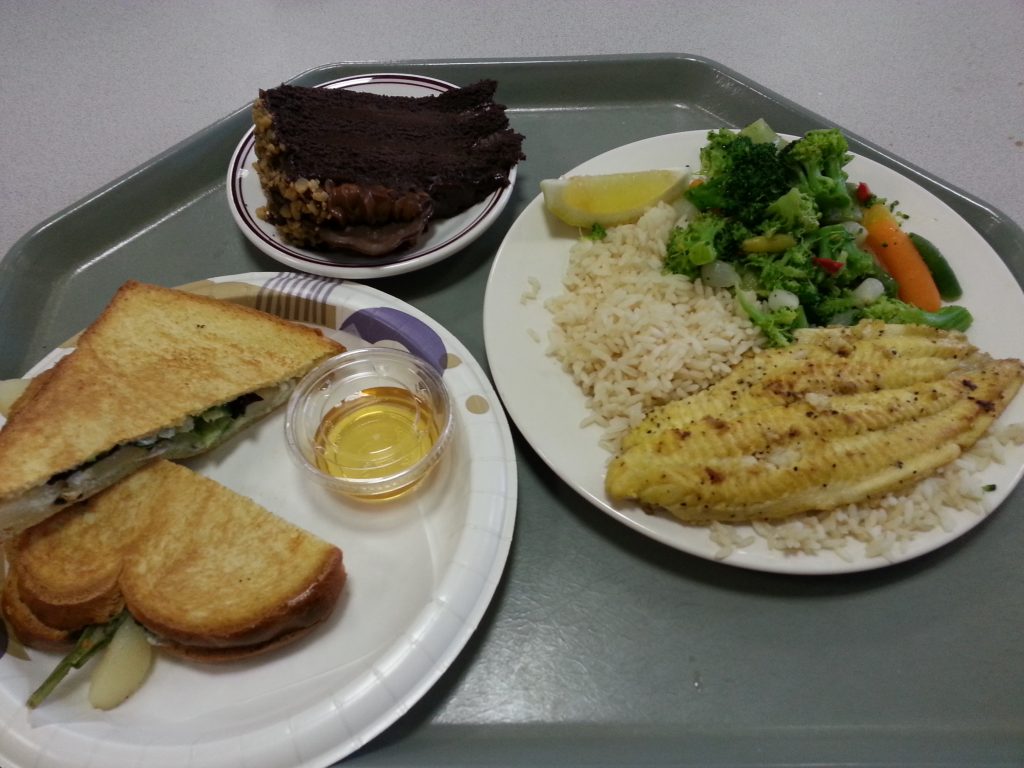 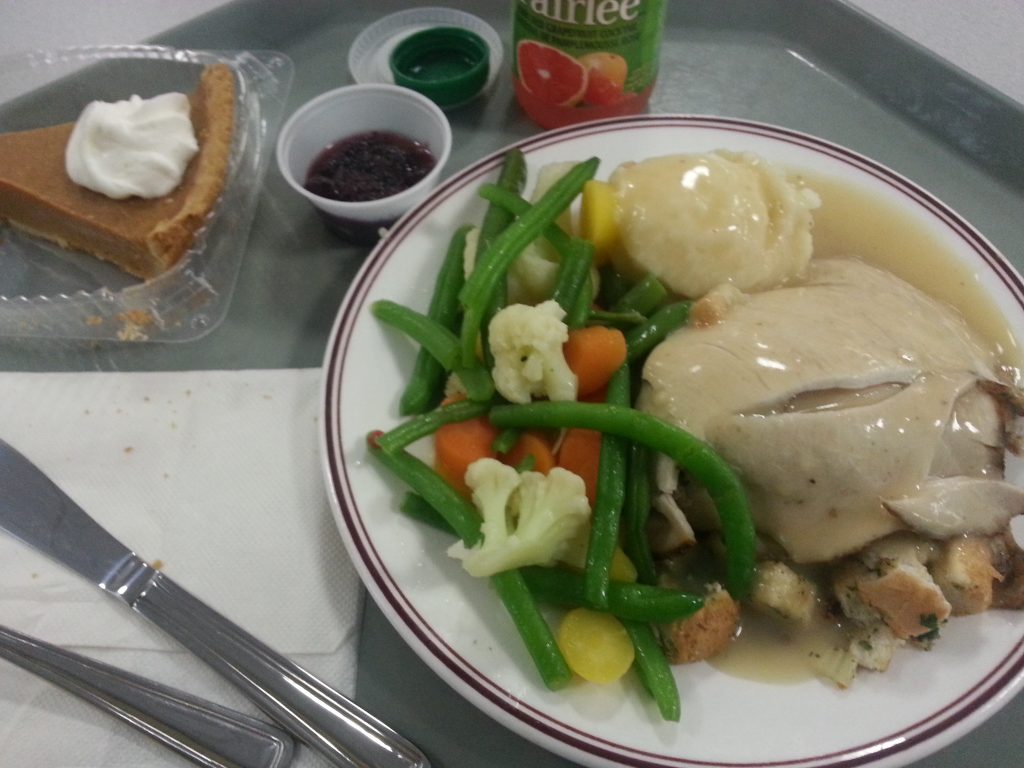 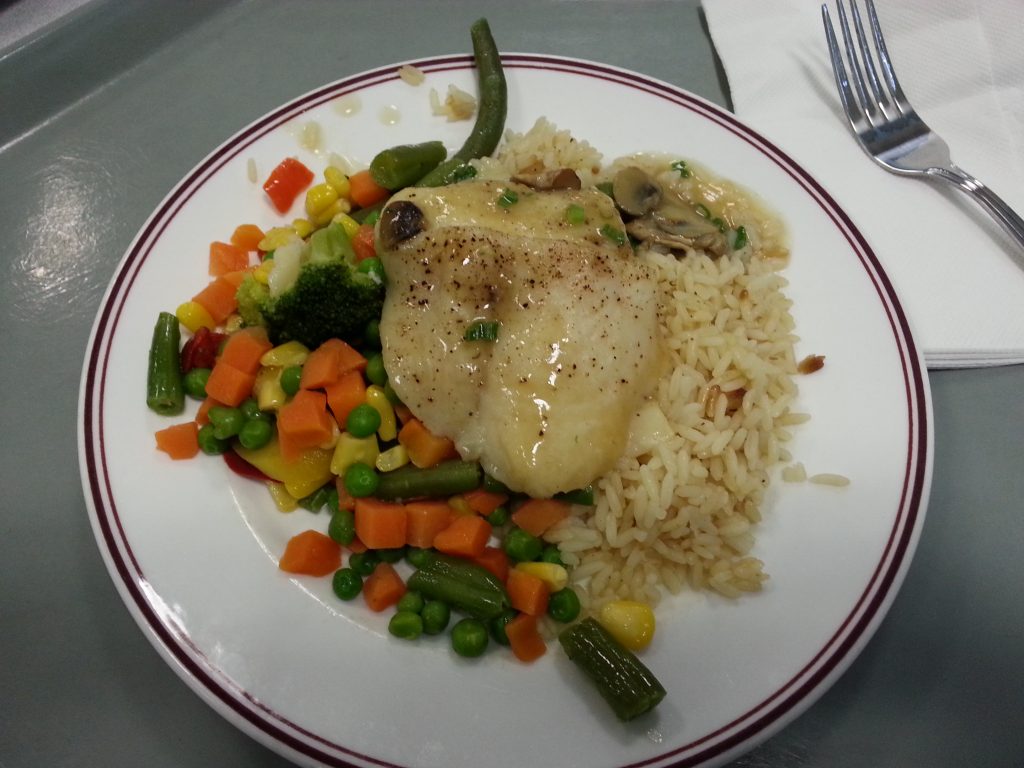 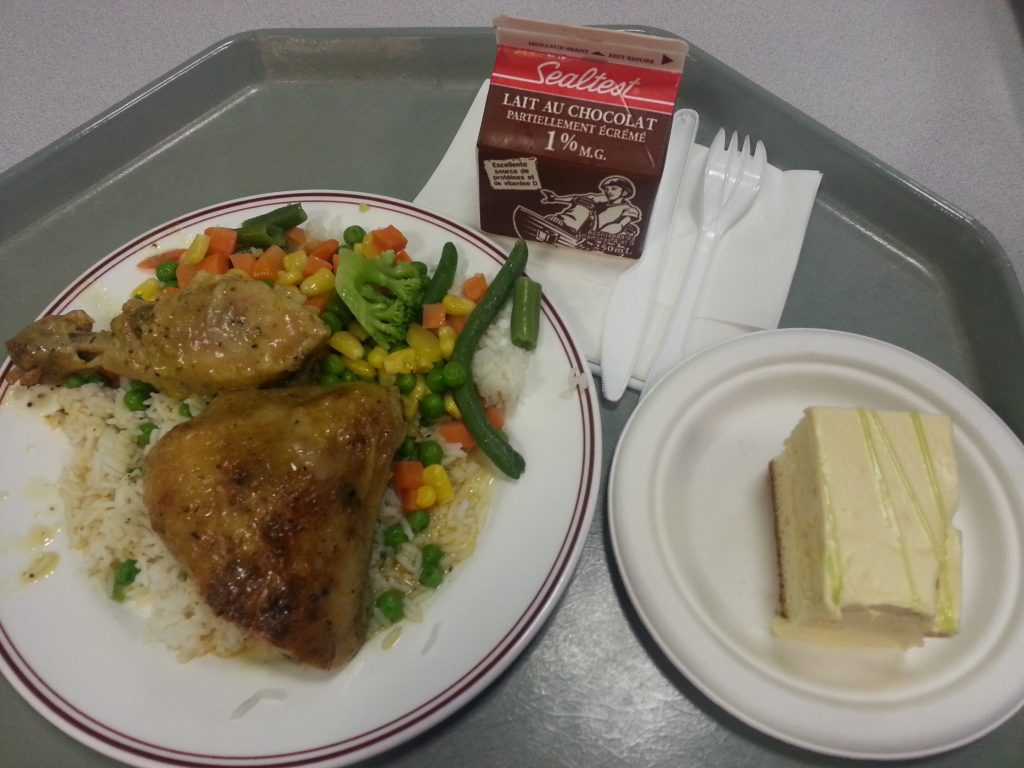