Here’s what’s been going on lately…

I feel like I’m planning for three trips at once

Oh, wait, I am! I’m headed to Halifax+Toronto in a couple of weeks. There’s also the set-in-stone Toronto trip in the summer for Lil Sis’ wedding. And I’m also trying to organize a Vegas bachelorette trip.

For a hot moment last week, I felt like a travel-booking ninja. There are several factors I’m juggling when I’m booking the simplest of cross-country YVR-YYZ flights these days. Flights must meet the following criteria: (1) be as cheap as possible, (2) departing the west coast sometime between 10 a.m. and 1 p.m. – else it’s too early trying to get us all to the airport or too late arriving in an EST/AST city, (3) direct flights – some connecting flights sneak into my search, (4) shortest possible connection time if we are headed to Halifax, (5) suitably large aircraft with bassinet rows that I can request since I am traveling with an “Infant in Lap” still.

A couple of aircraft models (787-8 and 787-9) I was not familiar with so off I went to check SeatGuru their configuration, then I started the process of booking that flight and then checked how many bassinet row seats were still available for purchase. I found myself backing out of one flight because very few bassinet row seats were available. After booking a flight, I was immediately on the phone with Air Canada to request the bassinet row – it is never guaranteed in advance – and what would happen but this time (after two previously successful requests), the agent actually asked E’s age. Uh… over six months and too old to be in the bassinet. And so the agent wouldn’t let me request it. I was welcome to pay $112 to sit in that row. No way, no how. The 787-8/9 flight I booked has 3-3 seating, so I took advantage of their free-cancellation-within-24-hours policy and changed my flight over the phone to a a flight with 2-4-2 seats. Let me and E bother only one other passenger instead!

I was miffed to be denied the perk of a premium seat for free. Traveling with E in my lap is going to really bite. I have yet to call AC back, assume I will get a different agent and just ask that one to put me on the list for a bassinet row….

In a comedy of errors, Edna and I ended up going to Scienceworld twice on the weekend but we only paid admission and went in once, on Sunday. The old children’s play area which I never visited has been replaced by a new permanent installation called the Wonder Gallery and my first reaction was disappointment in how small the area was. But then… how much space do toddlers really need? They were by no means all on top of each other.

After we (I) exhausted the Wonder Gallery, I took E over to the BodyWorks gallery where I have a reach of 40 centimeters (above average) and maybe I could have squished into the box if I wasn’t wearing boots. Maybe I still couldn’t. We also wandered over to Eureka! where E could bang on drums and understand the concept of percussion instruments and cause-and-effect. And then I realized I didn’t have my phone. So I retraced my steps back to when I last had it and rued how the very night before, I was thinking about how much is not backed up from my phone.

When I glanced at my watch, the cloud with a line through it displaying on the top indicated it wasn’t connected to my phone. I was wearing a vest with several pockets and my Sash Bag has lots of pockets and I was fairly sure it wasn’t in my pockets but not 100% sure. So I laboured downstairs near the admissions and membership desks in search of an information desk and I felt my watch vibrate indicating I had received some messages.

That is an indication that my phone was nearby. Or perhaps I was out of cell range and just re-entered it and so then messages were delivered. But I double checked that it wasn’t on me. A volunteer that I flagged down walked me to the memberships desk as she heard that a phone was turned in and what would you know, my “gold Samsung” was the very one and my watch was the first clue I was saved from a world of pain. Someone out there was a good soul turning it in so quickly!

Suffice it to say, I am redoubling my back up efforts.

The novelty of having two days “off”

Rather than take a whole week off and get out of town, NPY’s style is to make long weekends or extra long weekends with his vacation days. He made a super long weekend after Easter taking both Monday and Tuesday off. With him taking Easter Monday off, I was able to switch my regular day off from Monday to the following Friday so cover off since his parents (E’s Wednesday and Friday childminders) are going on their annual trip for two weeks starting that day.

Which meant NPY was SAHD for two days and I say, “Good riddance” to that! Tuesday should have been a chill day for NPY since it is a daycare day and that is why he strung together a Tuesday off but the stars aligned that he has a daycare meeting in the morning and a pediatric dentist appointment in the afternoon. Oh, boo hoo. I was really stoked to ride my bike to work for the first time since the beginning of January. I overslept today so it will just be once this week. Better than none at all!

Next week, continuing to cover during his parents’ absence, NPY has two days off so I will endeavour to ride again both days!

Back on the treadmill and Thinspiration

Two months ahead of the grueling Whistler 10K I signed up for, I hit the condo gym and went for a run for the first time in ages. I’m not pushing myself very hard because I feel like all I really need is to be in the habit of running about 45 minutes or an hour and the rest of my physical activities – ballet, barre, spin, yoga, and aerial! – will have to make up the rest. Still, I appreciate once again the ease of getting to the condo gym and doing something physical after hitherto taking a bus or driving to all of my other activities. I appreciate having such a flexible activity that gets me out of the house when I need it.

With the bridal party’s input, my sister has finally selected our dresses and the one pictured above is the maid of honour dress. Those sleeves and the slim profile are making me really nervous and target areas are arms and waist. Thinspiration better work!

Below are gratuitous (and old) baby photos. Also proof how I got the bassinet row when E was beyond the age where we qualified, simply because no one asked his age when I requested it. At 16 weeks (four months), he qualified and slept for about an hour in the bassinet (creepy, I tell you). At nine months (38 weeks), we got the bassinet row again, which is how I have the room to take that photo from sitting right in front of him. I also remember how I was granted the bassinet row when traveling back to Vancouver from LA last September when E was 14 months old – I couldn’t take it because that would leave NPY sitting alone elsewhere on the airplane. So I gave it up to sit with NPY and it was not bad because our aircraft I selected to have 2-4-2 seats. 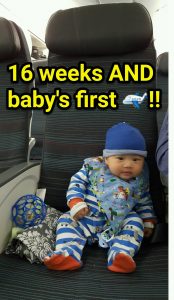