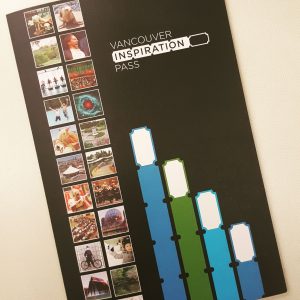 Back in May 2015, I attended The Happy Show at Museum of Vancouver with my cousin – we all had complimentary entry to the museum because her friend was holding an Inspiration Pass and thereafter, I put myself on the request list with VPL for one as well. Over two years later – the wait time use to be far shorter – I have gotten my (first) pass.

I was notified on Wednesday, September 13 that two weeks later on September 27, I could pick up my pass. These passes are tightly regulated and the pass starts on the day indicated and not later at a date convenient to you, and expire two weeks later. The two weeks notice allow you to arrange your schedule a little and investigate the venues you want to check out. At this time, I only work four day a weeks, so during that I am free for six days during the time I have the pass while a five-day-a-weeker would normally only have two weekends (4 days). It also happened that NPY celebrated a milestone birthday and Thanksgiving was during the period so he was off eight days during that period. (What a slacker, haha.) 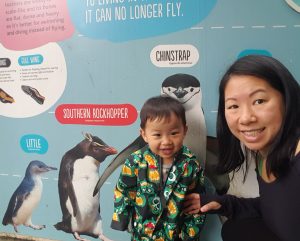 I wasn’t very assertive when making plans with another family, to assert we’d meet at 10 a.m. when the aquarium opened so that they could get in on the Inspiration Pass. They thought we would meet later and ended up going for breakfast so we went in first. In the case of the aquarium, I already hold a valid adult membership and the other family was going to renew their family membership.

It turns out that going to the aquarium is one of NPY’s favourite things to do. No wonder he seemed to want to go to the new Ripley’s Aquarium in Toronto and I was balking based on timing and price – neither of which were really valid. We spent about two hours there but we were quite chill especially after the other family arrived but we saw most of the exhibits even if we could only catch one demonstration. After an eventful morning at the CIBC Run for the Cure where E walked the whole 1 kilometer, we went to Scienceworld in the afternoon for 90 minutes. Some of the interactive exhibits held more of our attention but NPY deemed it as a giant playground for kids.

I’ve never been to the conservatory before so it was nice to visit for just the cost of on hour of parking in QE Park. Just E and I went on my Monday off and at first, I thought we’d be through with walking within 10 minutes. I didn’t even grab the laminated sheet to identify what I was seeing. Rather, that sheet was not offered to me but it’s okay. And going anywhere with E takes longer than I anticipate and he enjoyed seeing colourful birds and spending time outdoors that was actually indoors. His favourite was this little yellow bird which now I want to know what it was. And he was quite engaged by the talking parrot who would out of the blue say, “Hello.”

Overly ambitious, I wanted to check out the Space Centre and the Maritime Museum. I couched it as “going to see the Moon” and “see boats” to E but we ended up with only time to visit one and NPY wasn’t keen on dowdy Maritime Museum and I know he’s more interested in space. I am not keen on space news – it seems so fantastic, out of this world and esoteric. I believe it but I just don’t care? I care more about planets but not the latest news about the behaviour of black holes or something or the nebula just discovered. That’s why I stopped tuning into the CBC podcast Quirks & Quarks.

As soon as we arrived, the 11:00 a.m. show was about to start and I held E tight as we reclined in the planetarium. NPY was shushing us but then learned it is an interactive presentation and that people with toddlers will duck out long before the 45-minute presentation is over. We prowled around the Cosmic Courtyard Gallery where the lighting was so stark that photos were difficult to take.

Museum of Anthropology on Sunday 9 October ($18 per adult) 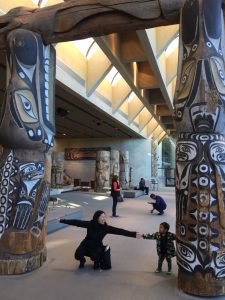 For once, we got out in time for 10:00 a.m. opening of the venue except… Nitobe wouldn’t be open until 11:00 a.m. Hey, but MoA was open and I was thinking it would be #2 on the itinerary and we’d breeze through it. I had heard it is a beautiful space and its admission rate is pretty high so we had to check it out. The main gallery is beautiful and showcases the art in natural light. I wanted to read every plaque to know what everything was far, put together the story… but I didn’t. We touched the Bill Reid bear (because you’re invited to) and E noticed the prominent anatomical feature of the welcome figure and repeated it several times to amuse himself. :P

In the Amazonia exhibit, the hammocks alone were worth the “price” of admission and once E realized what it was good for, he didn’t want to leave.  I also wanted to linger in the permanent exhibit which has burgeoningly full displays from Chinese and East Asian to Portuguese items. It was time to leave and check out Nitobe Garden.

I have also never visited the famed Nitobe Memorial Garden which is one of the top five best Japanese gardens outside of Japan. Since Inspiration Pass admission to the Botanical Garden did not include the Treewalk – who knows if E would like it at all – I concentrated my efforts on the museum and the garden and even did a little research beforehand. There is a self-guided tour and from the ticket office, I picked up a hard copy version and we guided ourselves for about half an hour.

It’s so lovely in the garden with brilliant attention to detail. I made sure to draw NPY’s attention to everything and E loved kicking up the pebble walkway. 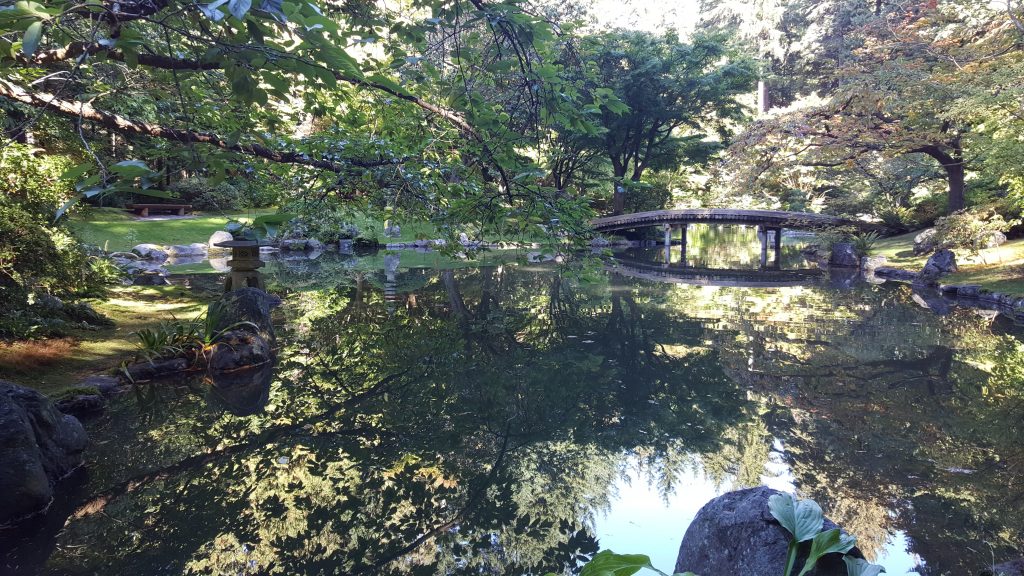 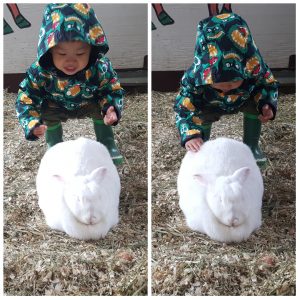 I was really excited to visit a farm with E and we made it a group outing with his buddy D and his parents and his cousin A and his parents. I blanked and forgot to bring vegetables for the bunnies and tossed some stale bread into my bag – oops. When we did find the bunnies, they are not like the ducks and chicken who enthusiastically eat up all of the seeds. You’re greeted by all of the fowl first and then we wandered about the grounds. E didn’t connect too much with animals behind a fence like the horses and cows but he was into petting the pygmy goats and bunnies. NPY was irritated by yet another early morning (we were there for 10:00 a.m. opening) but I pointedly remarked on how many other families were also there. 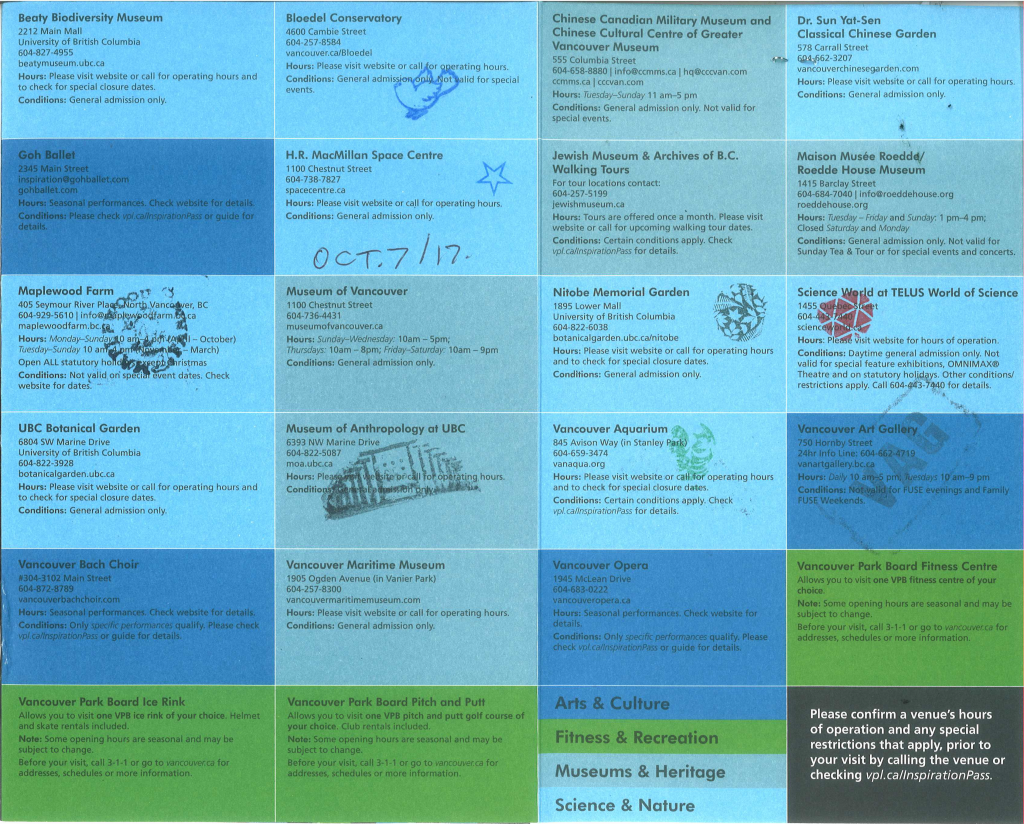 Several other venues are also on the Inspiration Pass that I would be so interested in including the Goh Ballet, Vancouver Opera and the police museum, but the first two did not have shows at this time.

To be sure, on January 1 next year, I will be putting myself back on the request list for another Inspiration Pass – visit to old favourites and discover new ones!

It’s been a really great two weeks, made possible by @VancouverPublicLibrary Inspiration Pass. In Week 1, we checked out the super popular Monet exhibit @VanArtGallery, took @whoisNPY to @VanAqua which I learned is his favourite place, played @ScienceWorldCA – even the adults, and were up close with the exotic birds @Bloedel_Conservatory. In Week 2, we quickly visited @VanSpaceCentre on Saturday, thoroughly enjoyed @MoA_UBC and Nitobe @UBCgarden on Sunday, and had a fun group outing to @MaplewoodFarm on Monday. Add to the mix @CIBCnow Run for the Cure where E walked the whole 1 km, dinner with friends and kids for a double 40th birthday, and two family Thanksgiving dinners and we hardly had a moment to think on the weekends! #vpl #inspiration #vancouver #toddlersofinstagram