I have been really fortunate for the past year to be able to work four days a week, after returning from mat leave. Mondays, after the weekend, are for just me and E and they are getting to be really fun these day – with bouts of trying. He is, after all, over two years old and under three.

When I don’t have errands, we go to the aquarium where I have a single adult membership and try to go once a month for about two hours. Or I make it an educational morning and take him to Strong Start at one of the city elementary schools. And if I have no other ideas, I take him to play gym two blocks away at the community center.

These days, I try to make errand days fun for him. There is potential for his world to crack wide open by the places we go that are different from the norm and the past two Mondays have been good examples.

The night before, I decided I would get some bloodwork out of the way on my day off instead of during a workday. It involved fasting for at least 10 hours so it was in my interests to get it done first thing in the morning and then be able to get on with eating. We woke up at 7:30 with my incentive to get to eat, and to be able to join NPY on his commute to work, we were ready astonishingly quickly within an hour.

It’s a good distance to the train station so he was bundled up warmly and cheerful to walk, as if we had a mission. It was a bonus he got to ride the Skytrain with his dad. Since I was swinging by the office to pick up the req form at my desk, I would say hi to some coworkers and introduce some others to him. Hence him donning the totally adorbs firefighter jacket. He was business casual underneath.

The super long escalators at Granville Station fascinate and my office was a really different space for him to be in. He was well behaved and didn’t see the long hallway as an opportunity to run and shout! To some of my colleagues, he warmed up quickly and for others, it simply needed some more time.

When I was preparing some fresh OJ for him, I accidentally licked a drop that got on my finger. I know OJ has so much sugar but I continued to the lab in case they thought it was okay given it was a drop and two hours had passed. But they denied me and I was mostly ambivalent because I could fairly easily go another day.

Vancouver Art Gallery’s new plaza is an inviting and open space. E was happy to run across it and go up the iconic steps towards the super duper large lions. On that day, with the lions at the ends of the shot, he stood eight steps tall. I’ll want to take more photos later! On the train back towards home, he leaned into me as we sat on the train and there wasn’t much to see as we were underground. He must have been hungry but he wasn’t grumpy. When we disembarked at Broadway-City Hall, he had a really neat overhead view of the trains going in both directions

We ended up at McDonald’s – don’t tell dad LOL – where he ate nearly all of my one hashbrown and most of the egg and cheese of my breakfast sandwich. An older man dining alone sat down next to us and the sign of E provided him with an in to talk to me. He told me how he came to Canada at the age of 6 in 1956, about how great Halloween is and he believes in spreading cheer throughout the year. As such, he carries around some unopened Hot Wheels cars and I also saw loose candy (in wrappers) in his backpack’s mesh side pockets. I politely declined but he insisted so I gingerly took the slightly beat up packaging. I’m saddened by my suspicions because the world is the way it is. Is it possible it was stolen and it would set off an alarm next door at London Drugs? And then there are predators lacing innocuous objects with fentanyl to get new customers to cause havoc, I don’t know.

Next we were at London Drugs. Since the closest Toys ‘R’ Us isn’t quite walking distance, London Drugs and Winners are our “toy stores” for the purposes of free entertainment for the kid. And especially at London Drugs, I have to keep a lid on him feeling like he’s in a playroom! It’s a sport of buying as close to and over $10 as I can to get a qualifying visit and earn their rewards. I learned that buying a tin of sardines for $0.99 could be a savvy way to do it. 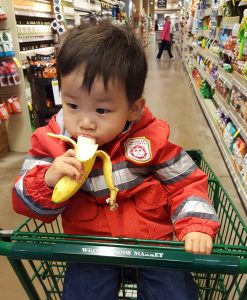 Around the corner, we went to Whole Foods and at first, I thought I might just use the kid to get a free banana that I would pocket and make a smoothie. But his excitement to receive a banana and proceed to eat the whole damn thing made my grudge met away really quickly.

It was time to walk the rest of the way home  and I thought he might enjoy walking more if it was down a ramp that connects the Canadian Tire to the Best Buy. Boy did he enjoy that immensely and the only way to make him stop repetitively running up and down the ramp was to make a game of walking backwards and out the door.

While E was walking backwards, a man walking by commented on the game, then remarks on and congratulates me on speaking to E in a different language. He knows three languages and English isn’t his first language. This chit chat conducted without him breaking a stride. Gee, isn’t E an old man magnet? I like to think that the men might see E and he reminds them of the future and that it’s going to be good.

At Columbia and 1st Avenue, we stopped to watch a bulldozer doing some work on the clearing across the street from our old apartment. That big open space – the clearing – won’t last forever so I took a photo to mark it.

And that was just the morning. We didn’t do much in the afternoon.

How many things did I want to accomplish this Monday?

Walmart was open the earliest so we head there. The car nav sat couldn’t locate it because it’s fairly new. By the end of the car ride, E was getting upset. But he was quickly assuaged with a balloon from McDonald’s and a hashbrown. Again, don’t tell dad! It’s a bright store that is pleasant to walk around the auto cart escalator would blow both of our minds. Also super conveniently, I knocked off the need to got to Costco at the same time as T&T.

E charmed the cashier who asked him his name (I whispered to him what to say) and his age. For the latter, he’s accustomed to me asking him so I told him not to be shy about giving his answer, paraphrasing her question so he would understand. 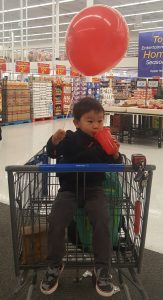 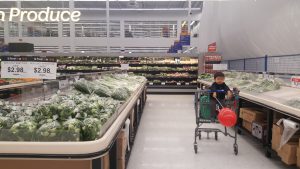 Then we were at Ikea to test beds during a quiet time of their business hours. I had planned on having lunch at Ikea so we couldn’t hit there first. And because we weren’t going home right away, I couldn’t buy food at Walmart that needed to be refrigerated.

The Ikea window shopping was a success as I identified a bed that could really work for us as his bed instead of the one I originally pegged. He also enjoyed when I pulled it out and it looked like monkey bars. Lunch was not a stellar affair in terms of his intake but it was decent, filling him enough to make him drowsy during the ride back home.

Fortunately, there was street parking and I was able to IM with some people while he napped. It was a brilliant nap, too, far exceeding the one hour I thought he maxed out at in the car these days. I do believe that lots of good stimulation will tire him out well.

He woke cheerful and after a quick visit home, we were back out to Daiso in Chinatown which has… a toy section. I let him carry a basket which make him believe that he could got shopping! Having the toys with him occupied him while I looked for items and rationalized between choices and talked myself out of buying too much. But I had to to be vigilant he didn’t truly play with the toys and run the stuffed cars on the ground and get them dirty! He wasn’t pleased to leave the store and wanted two die-cast metal cars instead of the one I limit him to. The cashier – good thinking on the spot – implemented a switch solution. He let go of the yellow Mini I didn’t want to buy when she handed him the yellow schoolbus she had already scanned. 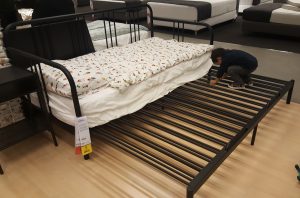 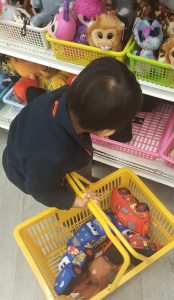 After all and all, I nearly forgot to go to UPS! It was already 5:30 but dinner was a cinch so he was excited to go out again, this time on foot, because I brought out the cart to bring back the package. He was sweet, helping me push the cart on the other side from me but agreeable to hold my hand when we reached an intersection. However, when I wanted to fold up the cart when we were back home, he did not like that and he lay himself facedown on the ground outside the apartment and cried. Oh dear.

His bathtime stacking cups have animal shapes which suggest the obvious story about one bigger fish or creature eating the smaller one and he was delighted by this new story and refused to leave. I think I really enjoy these “kid in a box” photos because soon, he won’t fit in the boxes and eventually, it will seem like the wildest impossibility – when he’s a tall (we hope!) strapping young man – that he was ever so small! 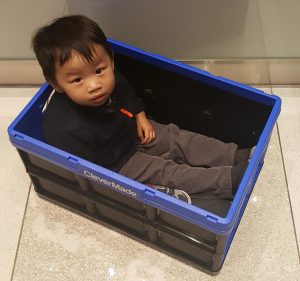 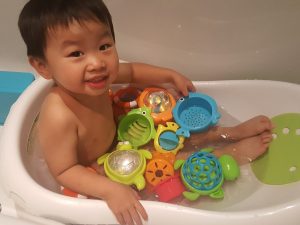 Mondays are my “day off” from work but it’s so that I can have a bigger hand in E’s upbringing than just weekends. I try to make the day as stimulating as daycare and he keeps me on my toes, having to be imaginative to entertain him intelligently.