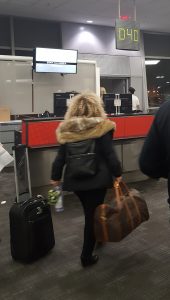 (I was going to post this on IG but I think it thought I was too long-winded so I am posting here.)

A week ago today, I was so steamed. I was standing amidst a crowd of Vancouver-bound passengers at Toronto Pearson Airport and shouting into my phone that SOMEONE is going to hear from me because I had been booted from the Vancouver flight that was boarding at Gate D40 and for NO CAUSE.

Especially as the day drew near, I was apprehensive about flying from Halifax to Vancouver in one day. Two flights of 2.5 hours and 5 hours duration, 2 hours of connections. Would the kid nap? Would the kid eat? Would the kid be THAT KID crying throughout the flight, wriggling around, kicking the seat ahead of us? Would we get back on time – and that time was right up against his bedtime?

At Halifax airport, I learned that my first flight was delayed by two hours and I would miss my connection. I had to call an Air Canada number in order to re-book and that agent couldn’t re-book while I was checked-in to the flight I needed to cancel and I wasn’t yet right in front of an agent at the airport who could fix that. It felt like a frustrating catch 22. As I was on the phone, the delay was updated to just an hour but it was only 15 minutes connection time and I couldn’t keep the flight. When I had been re-booked, the delay was stated to be only 30 minutes and I would not have missed the flight. But I was assured that the actual delay was still unknown so it was best for me to have a later flight.

Besides chilly conditions in Halifax meaning the de-icing cranes were out, there were heavy winds in Toronto forcing a change in runway configuration that reduced their capacity. I get it. I was too early for holiday travel delays but not too early for winter weather delays.

The first flight was okay. It was kind of cozy in that E gave in to his fatigue, curled up on me and slept the whole flight. I thought I might get thrown off the flight (like a recent Spirit Airlines passenger) because I didn’t want to wake him to put him in his own seat. Good thing (?) he’s small and looks like he might not even be old enough to have his own seat and no one noticed/bothered me about holding him during take-off and landing. 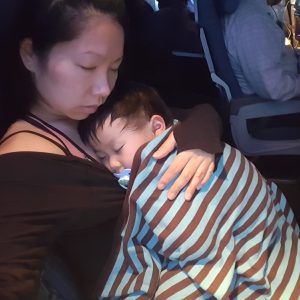 I was sad to leave a spacious Boeing 767-300 to have to slum it on an Airbus 320 for five mind-numbing hours WITH A NEIGHBOUR to boot.

After emerging from Gate D40 in Toronto, I happened to turn around and look at the screen and realize that the very aircraft I was getting off changed flight numbers and was the flight I was originally booked to go to Vancouver. Meaning THERE WAS NO POSSIBLE WAY I COULD MISS MY CONNECTING FLIGHT. Mostly, the re-booking agent should have noticed this. But while re-booking, my first flight was showing as greatly delayed, and the connecting flight that was entirely dependent on it was still showing as being on time.

A system thing. It’s not perfect. Still, I was SO INCENSED. First of all, my re-booked flight ended up being delayed by 80 minutes. Then, I was scanning at the gate, wondering which poor bloke gets to sit with me and an upset toddler. It felt like the worst conditions ever. Fortunately, there was an Air Canada Customer Service desk at Pearson and I used my delay-induced long connection to queue up and complain and was compensated with some meal vouchers. If we didn’t happen to have ended up with Preferred Seats and fortuitously vacant third seat, I would be making a loud official second complaint right now! 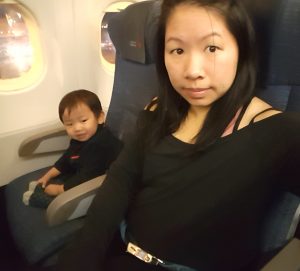