I fell headlong into finding an organization solution for my phone apps after I attended a Tech Power Hour session at work, admired the desktop I glimpsed in the presentation (not related to the session) and wanted to emulate it. It turns out it was flashy looking but nothing very special but I had begun my quest nonethless.

I really do despise trying out different launchers. Each one does herald itself as the best with such-and-such great features but they all seem the same to me and some seem seriously invasive of my system. I still won’t try the ones that are highly customizable and you can create your own themes. Who has the time for that? Who has the design eye for that? Not I. 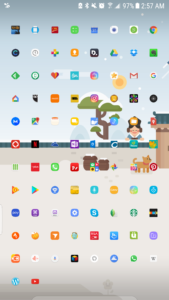 I have always been a fan of keeping everything on one page rather than having to scroll through multiple pages, like I have to on NPY’s phone.  Lens Launcher appealed to me for that reason but in practice, I did not like it. Even I was going to get annoyed hunting for an app and the magnifying glass effect when you do zero in on what might be your app was not a selling feature. Z Launcher is made by Nokia and isn’t that a far more comforting thought to install a launcher made by a really well-established company? It touts being predictive based on your patterns and time of day, day of week. Thus I’m supposed to give it a longer try in order for the algorithm to figure me out. It was a little creepy how it figured me out to a large extent but I think I found myself selecting the second or third item so it hadn’t figured me out completed.

Then, I saw an Instagram pal post her desktop and it clicked with me. Apps are organized into folders based on the app’s icon’s colours. I replicated the folders with same/similar colourful emojis. There are not more colours than folders that fit on one screen – yay. The best part is not having to think about where to file a new app because it’s merely filed by icon colour. I know that where I put it on the first try is where it’s going to stay. I don’t have to revisit where apps are filed because the general mixture of my apps have changed and I want/feel the need to refresh create new categories. The most maintenance I might do is to drag the most often-used apps to the top so they show up in the folder preview.

(Oh, maybe I could stand to update my background from this corporate-looking geometric background. And I’m using M Launcher. It hasn’t really irritated me that much yet.)