I would not have noticed the event if I hadn’t come across the swag bag reveal IG post which lead me to this year’s t-shirt and that finishers receive commemorative charm bracelets by Foxy. (I thought the graphic of a heart with the word “you” was preferable to last year’s shirts that say “Love You”. But the year before’s purple was more attractive/flattering and features a silhouette of a woman running and “Love You”.)

The fundraising component nearly threw me off but there was no minimum and I don’t frequently solicit friends for donations so I made my low goal easily and then nearly made my new $200 goal. It’s an undeniably good cause and spoke to many of my female friends.

I really had no intention to train – it’s just 5K! – assuming I could bang one out with moderate challenges given I infrequently do cardio these days and zero running.

It would be a jam packed weekend. My daddy was in town on a visit and E’s first Mandarin Storytime class was right after the run. But aren’t those the best weekends, too?

A few days before the race, when emails were sent out with bib numbers and confirming race package pick-up, I realized my grave mistake of registering for the for the 10K race instead! I laugh at myself and also scare myself when these things happen with alarming frequency these days. Too many balls in the air. But it turned out that changing it was a breeze at package pick-up.

When my dad visits for a few days, I get him to spend a night at our place and with a 9:30 race at UBC and wanting to bring him along, that was my case he stay over the night before.

E, Daddy and I dined on boiled eggs for breakfast and we left at my desired time and I tried to stay chill as we made good time getting to UBC but didn’t know where to park. Parking on 16th seemed far so we drove around in Wesbrook Village and I think we ended up parking on Scholar’s Greenway between Wesbrook and Shrum. It didn’t seem too hard to find if you’re somewhat in the know. On our way to the start line, it was only just past 9 so I got NPY and Daddy to use the Blenz 2-for-1 coupon I picked up at package pick-up and was only good for a limited time and only in Wesbrook Village.

We arrived at the field next to the start line and it was so picturesque I wanted to cry – mostly because it was a great day and something different for my dad to see during his visit. The field’s grass was beautiful and it was a sight to see the runners in pale blue shirts dotting the field. The 10K race was supposed to start at 9:05 and the 5K was supposed to be underway at 9:30 but at 9:20 there were too many people still around, some with red 10K bibs and the 5Kers hadn’t made a move at all into the corals. The event was running about 15 minutes late and I was antsy. I kept doing the math about whether we could leave UBC by 11 and get to our next scheduled event at 11:30!

Around 15 minutes late, the 5K race started and runners/participants were set off in five waves. That much was clear and I seeded myself in the last wave so that I could run a little with E, hoping he would be inspired by the movement and run a bit. I hope for just 100 m and then deposit him with NPY and my dad…. 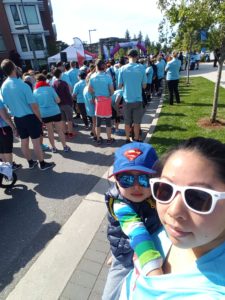 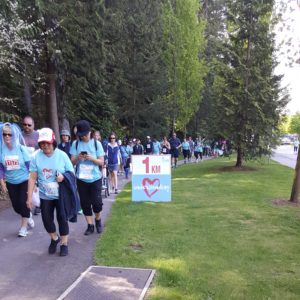 Not really. I think he was really intrigued and wanted to run but also floored by the number of people and the possibility to run. So I deposited him with NPY and took off.

In the first km, there is a hairpin and so NPY, E and Daddy only had to cross a patch of grass and see me running by and then we were gone for a bit but ultimately it was a out-and-back course.

The first kilometer took about 12 minutes. That is exceedingly long and is obviously due to the walking start with E. At the 1-km marker, a branded sign said “Understanding” and I thought about that for a while, assuming that at the next marker, there would be a different word for me to think about.

We head into the park and I kept my eyes peeled for the 2-km marker and for hazards. I haven’t been in Pacific Spirit Park in nearly a decade and I think it was the time I twisted my ankle stepping on a protruding rock. That’s a hazard. So are pine cones and larger twigs that can roll out from under your feet. My foot caught a pine cone (I believe) but I easily stayed upright.

The next marker I saw was the 3k one and I stopped to walk at 10:14 for 1-2 minutes. I had only stopped at the first water station. It felt like we were constantly going deeper and downhill in the park and I worried that it would be a climb out. It took some brain trickery to convince myself that climbing out of the park and on trails is more pleasant than on sidewalk. It didn’t take too long for me to be bored of my surroundings in Pacific Spirit and I took another 1-2 minute walking break at 10:20.

I did overhear a remark about the sad truth a lot of women don’t feel comfortable alone in the park as it gets dark because of tragic events that have occurred in past years so it was empowering to take over the park with the run.

I saw the 4k-marker at 10:22 and knew I had to run the rest of the way to slide in before 45 minutes were up. I knew I was well over a 30-minute 5K but didn’t want to blow 45 minutes no matter I had a walking start and those walking breaks.

I felt more energy emerging from the park and the race weaved between condos forming the university residential community with new paved paths. NPY, E and my daddy met me about 300 meters from the finish line at an intersection and E ran in spurts to catch up to me but at the same time, I had my time to consider and I took off.

At the finish line, we received our finisher bracelets and I was on a mission to get my swag bag, to get a pancake and take opportunistic photos. NPY, E and my dad were in my wake but I know what I’m doing. The swag bag had some heft and at the time of this writing, I realize I forgot to get my “Victory bag” of Life Brand products/samples. Sponsors gave us more goodies. Not pictured is an apple, banana and a Kind chia bar. Because of the wonky day, I was really grateful that I could feed E because he wouldn’t have a proper lunch. 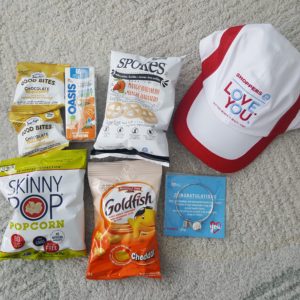 A race volunteer told me that on Canada Day, there would be the exact same run. Same route, yes. And the atmosphere with lots of kids and celebrating the day would be cool, too. But it’s not the Run for Women and have the same vibe and goodies so I might pass. But I did enjoy the Run for Women event so much I would definitely do it again.