Let me say that I will feel it keenly then I no longer work in an office tower that is above a good mall.

Saje joined the roster of shops within the last year and it’s a great addition in my opinion. It’s one thing to read the fantastic marketing copy about every blend and the benefits of the single essential oils and be convinced of which one(s) I want to buy, another to be in the nature-inspired store and letting your olfactory senses make the final decision.

I find myself justifying purchases at Saje because it is consumable (doesn’t – significantly – contribute to clutter), not so transient as a food court meal, not more clothing, and for me/my family’s wellness!

A month or so ago, Cadillac Fairview hosted a wellness seminar and participants received a 10-ml roller of Peppermint Halo and a card with “20% off” handwritten on it. I wanted to use that before it might not be honoured and shopped:

I was back recently because it was Buy 3 Rollers, Get 20% off and they had introduced My Farmacy pouches.

Traditionally, the Farmacy kit that was available was the Pocket Farmacy with an introductory/pre-set 6-ml rollers of 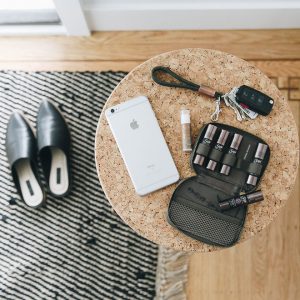 However, recently Saje introduced their My Farmacy pouches with three slots to hold up three 6- or 10-ml rollers. The name of the game these days is to allow the customer to personalize their selection (we’ll pay the premium for it) in order to express ourselves.

I feigned hemming and hawing over the choice of the craft paper with calligraphy choice or the highly reflective vegan leather choice of case. I couldn’t say I was enamoured with either in the store but a few factors pushed me to select the metallic case: the sales associate claiming the leather one would be easier to clean; that it’s vegan leather and not (flimsy HAH) paper, handwriting/calligraphy is too trendy and kind of overly feminine for me; and that the leather one is designed by founder & CEO Kate Ross Leblanc. 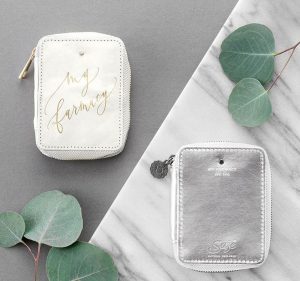 What do I want to express with My Farmacy? As it turns out, more than three things but I can surely cycle through them. 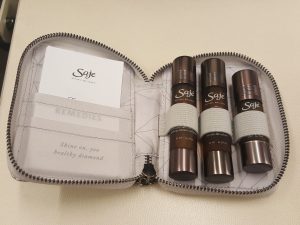 I already use Saje soap bars – bought four to get a discounted price, in order to have one to give away in a Secret Santa gift. And with the storefront, I could sample some badly needed hand cream like Carrot and Restoral.

Suffice it to say, I will be back soon!

I have an idea for a much bigger post about natural products and my movement towards those choices but it’s easier and more timely to blog about this purchase now and at some later time gather my thoughts for that one!