Spurred by reading Nathanael Johnson’s Unseen City, I’m taking photos of trees and other plant life around my hood (Olympic Village) and farther if it is really interesting – monkey trees!

Some things are so transient – technology, text messages, some relationships, the kid being a toddler, that television series I’m obsessed about – but there is plantlife and wildlife around us that we are normally oblivious to that follows their cycle year in-year out. It can be relied upon.

Just learning the name of the tree at the time of year it was flowering at my doorstep has increased infinitely my interest in it, considering my notice of it was at zero to begin with. And the kid’s pleasure in seeing the “馬騮樹樹” (monkey tree-tree) near where we often park to go to dine at our usual HKSC on Cambie is totally adorbs.

Later, I will figure out another way to catalogue the images but here it is now. Also upon Johnson’s recommendation, I have downloaded the iNaturalist app and hope to eventually connect with people who can help me with identifications! 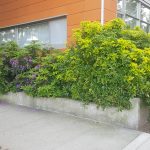 (image is from June when flowers have nearly all fallen)

150 West 1st Avenue
* bark peeling off like birch or arbutus 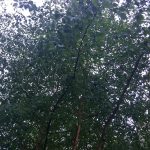 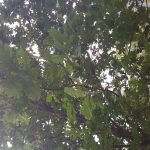 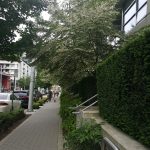 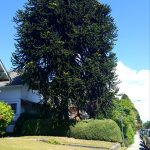 3313 Kingsway (the whole block between Joyce and Harold) 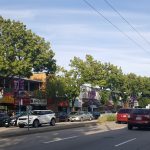