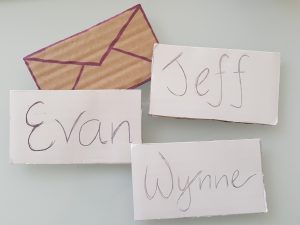 Once I opened the box and saw how the long top flaps laid against each other making a sloping roof, I was off to the races so to speak and couldn’t set up the little house for E fast enough. Afterall, it’s not forever he can fit in that box!

Out of some leftover squares, I created some “letters” for the three of us and he was thrilled to be delivering and receiving them through the mail slot that is the handles of the box.

At first, I thought I might decorate all sides and lay down a “carpet” (more Bristol board) inside but – so I say to myself – you have to leave something to the imagination. I ended up only decorating one side and fashioned a latch-style lock using pipecleaner. The floor deteriorated naturally over the months of use. Oh, and E peed once in there.

Over the three months we had it, E would love “hiding” in plain sight in there and when he was really comfortable, he would just barrel into the structure and we’d hear the sounds of a cardboard box rocking on the ground as he propelled himself to the back of the structure! 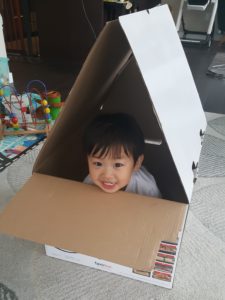 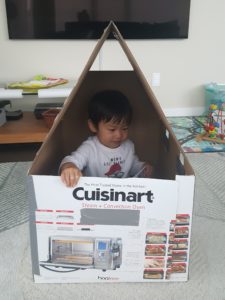 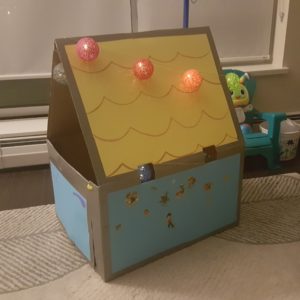