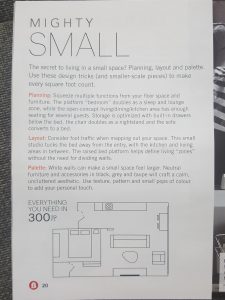 When I saw the following floor plan in a The Brick flyer, I thought it looked really familiar…

I lived in a 439-ish sf studio apartment at 2920 Ash Street between 2005 and 2011. Except for the open galley kitchen (mine was more enclosed) and it bedroom walls, the layout of the 300 sf apartment in the flyer was much like mine. A kitchen greeted you when you entered the suite and you had to round the corner to get to the bedroom/sleeping area. My couch and television was in the same place as in the floorplan and my desk/dining table was next to the kitchen.

Sigh, that was a sweet little apartment and I knew at the time that it was pretty decent compared to others where you can see everything (kitchen, bed, entertainment) from everywhere.

And I realized how having lived in that apartment (#205) from February 2005 to August 2011 (6 years and 7 months), it’s the longest I’ve lived anywhere besides the house on Arklow (#354) where I grew up – some 15 years before leaving for college and then five years to finish college at the local university. I’ve only been in my current condo since May 2014 (4 years and 4 months) so it will be a new milestone if we’re still here as 2021 arrives!

It was a retro-fantastic suite and I blogged about specifics and location a few months after I vacated. It seemed a little embarrassing to be in that size of space, in a “bachelor suite” but it’s more workable and seems smart these days and apartment-sized furniture is widely available. I’m not sure there were many places where I could stretch my student budget than Ikea so I’ll always remember fondly my beech veneer Ikea Malm bed (no storage yet then!) and black plush Klippan couch. I don’t have so much as a bookshelf from those days anymore!