For months, I’ve had this idea to make a transforming Transformer costume for E for Halloween. We kind of steered him towards liking Bumblebee because I could gleefully translate that name into Cantonese (蜜蜂). But he likes Optimus Prime quite a bit, too, and at this point can’t pronounce “Prime” properly, it coming out something like “py-rim” which I initially confused with how he also mispronounces “pirate” as “py-ren”. Adorbs.

My initial inspiration was the thumbnail for a video for a very Comic-Con worthy result. I didn’t get too far into watching the first video and my cousin Karina pointed out the video tutorial is four videos at 40 minutes each! And undoutably a daunting amount of person-hours to make and tools I don’t want to use. So I found a far simpler version and thank goodness the kid is only three years ago and his standards are not so high.

We did a meal kit week back in August and then I wanted a second box to make the costume and that wasn’t until the week after Thanksgiving. But I know myself – if I’m determined on a crafting project, I can whip it up in a few nights. It might not be pretty, but it would be done.

After I had two boxes and had E step in and out of one to gauge the amount of cardboard I needed, I rewatched the video and mapped out the pieces. Planning, right? And took measurements for the kid and estimated the relative length of the pieces.

But since I hadn’t started by two weekends before Halloween, I shelved the idea and it felt like a weight was lifted off me. I was just going to make a bumblebee costume with a yellow t-shirt from Michael’s either with black felt strips glued on or black duct tape – hah. 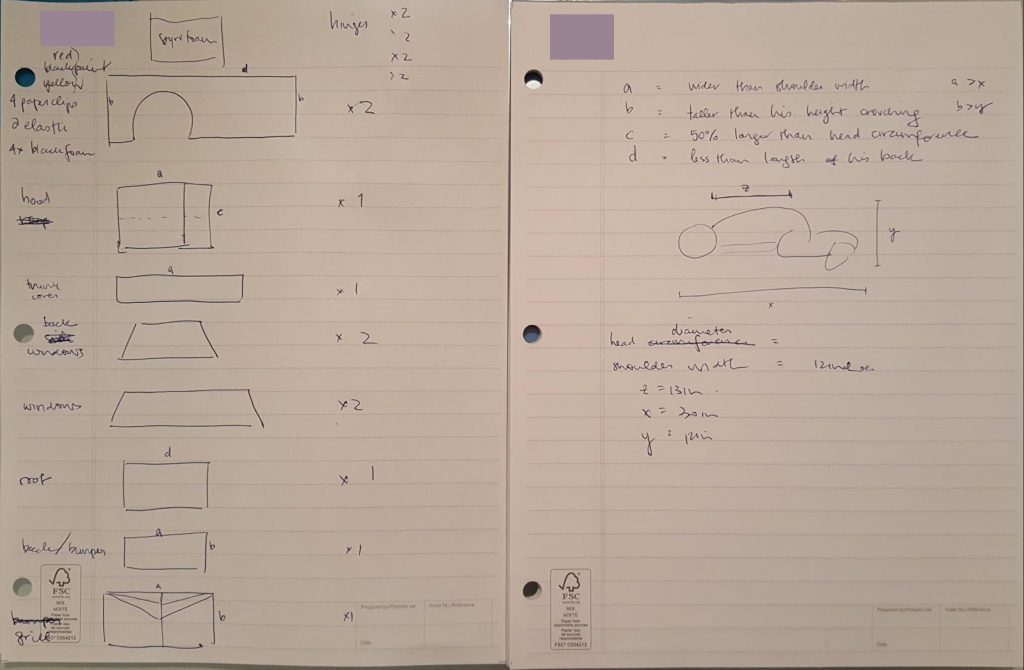 So, I had decided to ditch the Transformer idea for another year and we’d be a Fly Family wherein E is a bumblebee, I am a ladybug (red shirt, black felt procured and red wings borrowed from a friend) , and NPY is a black fly (I have black wings). And the Friday before Halloween (the following Wednesday) at lunch I was in Michael’s to buy a small yellow shirt for E and all the youth shirts were too big and I was divining how I’d sew  something like a bodysuit out of a long t-shirt and thinking it would look really bad and be somewhat fragile. Meanwhile, it bothered me because just earlier that day, BIL sent the video of the Comi-Con worthy costume and asked if we’d be doing that next year. I don’t respond in that chat and messaged NPY, why not this year!! (I also raged inside my head at BIL’s overly generous insinuation that it was a group effort to do things like this. Hellz no – NPY is adamantly not crafty nor handy.)

I bought the t-shirt at lunch but I decided I was attempting the Transformer costume. I wouldn’t feel good not having tried. And I could fall back on Fly Family, right?

Friday night, I cut all of the pieces. I felt like an elf in Santa’s workshop. Except it’s only just before Halloween. Besides the inherent danger of using a box-cutter, I’m harbouring some stupid superstitions about the far-fetch symbolism of using them. Suffice it to say, I was always retracting it when I was done any slicing!

I thought the most calculating part would be the 3D roof – that it’s not too deep and it’s somewhat proportionate to the car. I’ve got this! 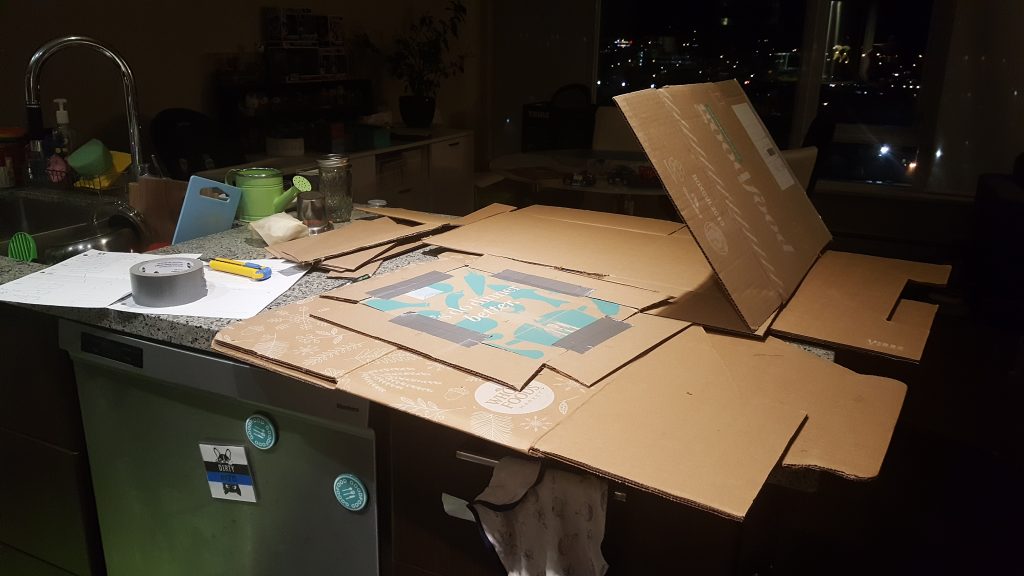 On Saturday, the kid woke up and saw very precariously stacked cardboard and I needed to have him crawl in and I would assess  how long the whole costume needed to be and then adjust the hood, roof and trunk panels in proportion. I was duct taping segments together on Saturday afternoon while the kid did not nap.

NPY is taking a total back seat – like back seat of the bus back seat – and asks how it even works. I’ll show you. 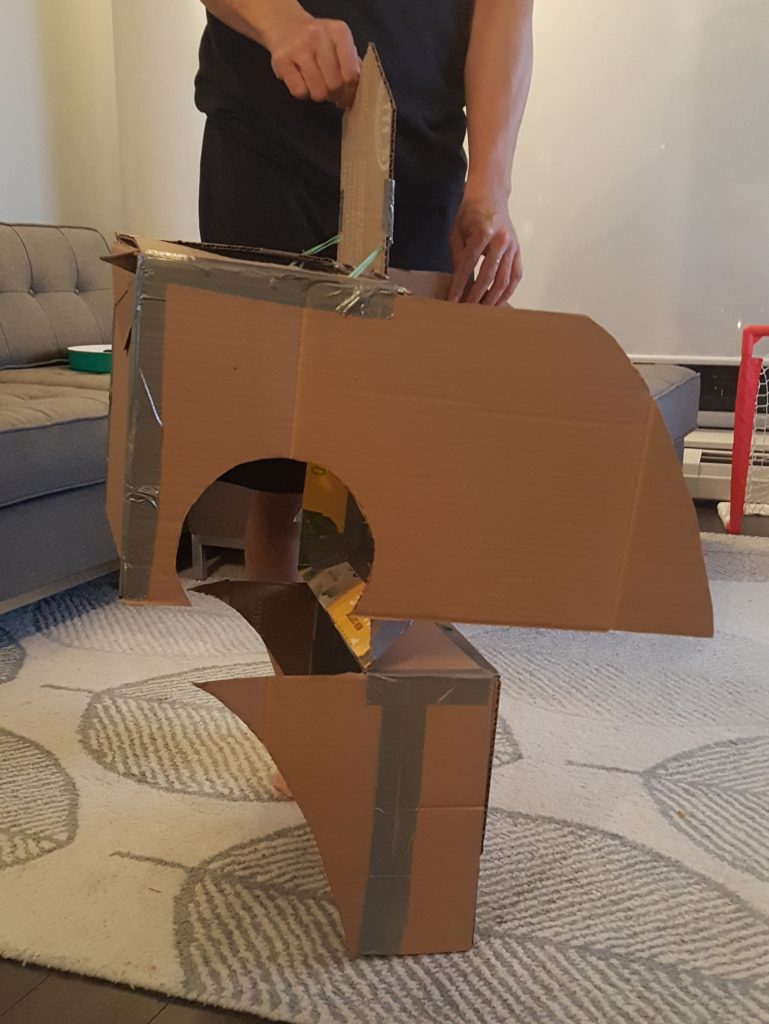 On Saturday night, I was glue gunning the yellow Bristol board on. Wow, that was a lot of glue and I got tired of all the fine glue gun threads. It really wasn’t all that satisfying and was super monotonous to turn the brown paper box to full on yellow, 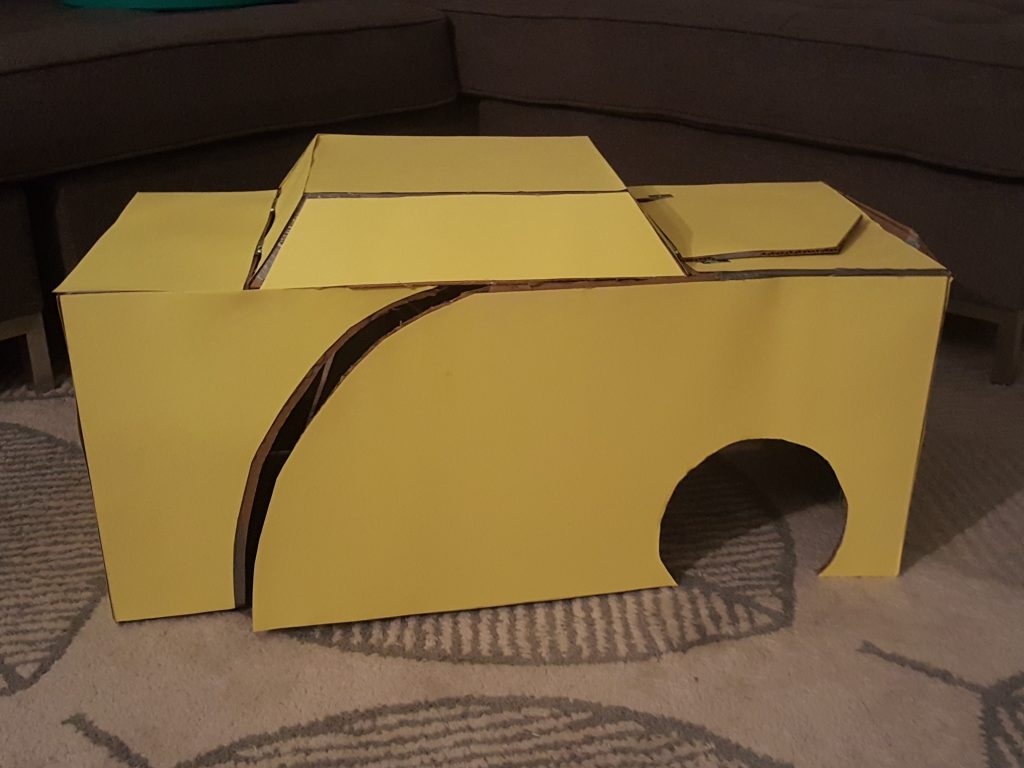 On Sunday afternoon and through to the evening, I was embellishing by adding the windows, racing stripes (fun!), door handles and – for the kid’s amusement – a gas tank door. On Monday, I would have printed out the logos and license plate. The kid was involved in colouring in the red lights!

On Sunday evening, even if one hinge kept coming apart (originally I even had glued it on in the wrong direction), I needed to show the kid how it’s worn, best demonstrated by showing him the video – which also showed him the construction process I also went through. So he was willing to climb into it and I fret that the head opening was a smidge too small (it isn’t) and the whole darn thing is too long for him and drags on the ground! I hadn’t completed the straps yet so he wasn’t really wearing it like a backpack and much preferred to treat it like a play car.

So it was a funny place to be to have spent the whole weekend making a costume that is too big for him and forgetting that he is only three years old and maybe not emotionally mature enough for it! Still, I needed to finish it, to give it a chance, even if he comes around to it a few months from now. 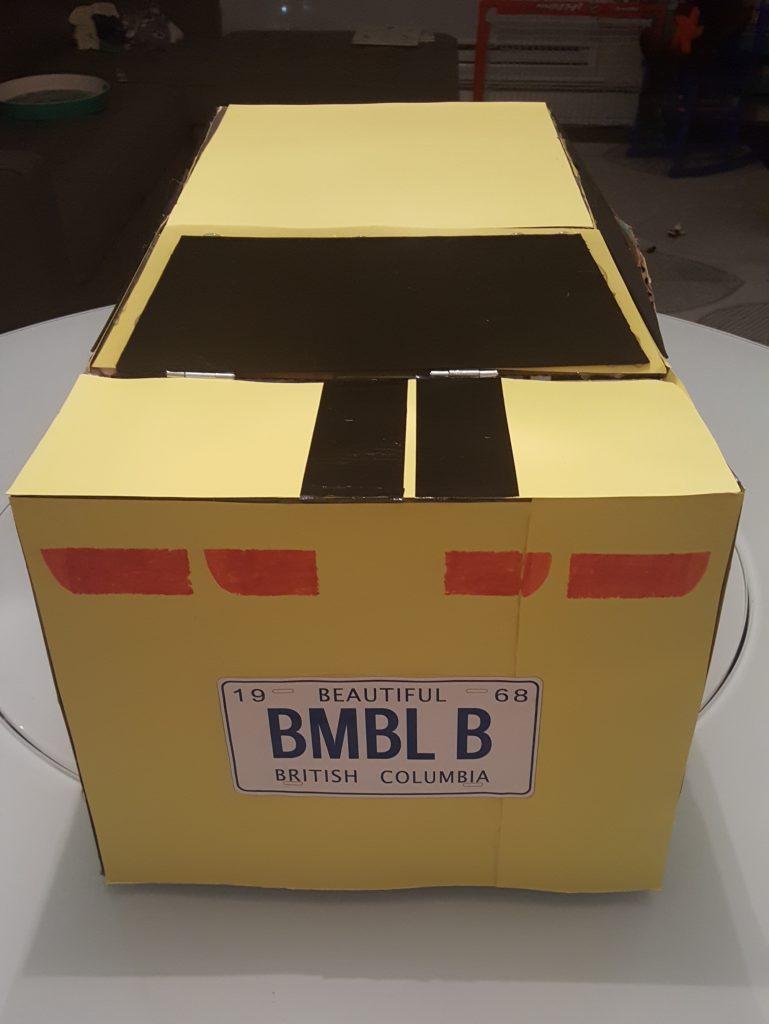 Monday evening was the one where I had to make back-up costumes but it sound so lame to me that I just had to do my best on the Transformer costume. I cut about 1.5″ off from the height all around and affixed the black elastic so it he could try it on as a backpack. If it still all fails, we have a new gi from tae kwon do that I would super-last minute fashion a black label and black belt for!

Fortunately, that 1.5″ was shortening it enough and with the costume properly strapped onto him, he was pleased as punch to be a real Transformer!

While I was buying supplies, I started to think that it was costing me more than buying a costume but it was just over $20. :)