I recognize the beauty in the symmetry, that I find use in two productivity apps (for that is how I will classify them) both with the word Lens in their name. I blogged recently (yesterday) about Microsoft’s Office Lens. Today, it’s all about Google Lens.

NPY and I bought Google Pixel phones last year on Black Friday sale (buy one, get one half off) and I quickly eschewed using Google Lens, accessible in my Google Photos app. Sounds like an invasion of my privacy. When am I going to use that?!

Remember when I tried to be a naturalist last year? I could only really ask the one person who seems to know it all, a SIL, but I don’t talk to her often enough to be able to have continual discussion. And I feared I was being bothersome. I downloaded the iNaturalist app but no one answered my one pathetic inquiry and I don’t use that phone any longer and did not download the app.

It feels like the worse to see something with the kid and he wants to know what it is and I can’t be more informative than describing just what he sees. Those days are over with Google Lens in my pocket.

In La Jolla, we identified cormorants (kind of like a “duh” moment). And here are some others we’ve identified.

1. Kissing parrot fish at the ophthalmologist’s office. I’d ignore them as particularly lumpy goldfish until they started “kissing” each other. That was funny. 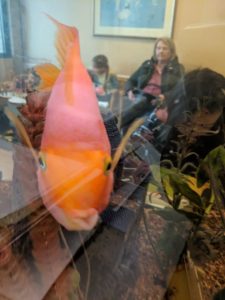 2. Pacific dogwood – I like how that result came through very definitively, i.e., pointing to a Wikipedia page. 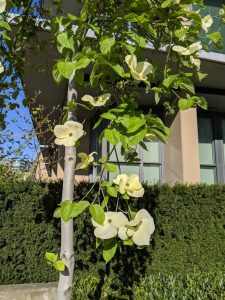 3. At first this came up as cherry blossoms but I know cherry blossoms, haha. It might be crabapple and I wouldn’t know if it was impossible to find that here. Bad on me for taking such a crappy photo! 4. Not the same tree (but around the corner) and so it might be an earlier stage in flowering of crabapple for that is result that came up. So when I see the trees and flowers I couldn’t identify last year – and more! – you know I’ll be pulling out my camera like some kind of nature admirer but that’s not the whole story!