Certain bean dishes, I’m partial to – like hummus and chili. Sometimes I’ll come across some lovely fava beans at a restaurant and want to make my own. But when you want to stop or decrease eating animal meat, then you gotta appreciate beans so much more.

Recently, in my favourite butter chicken recipe, I used firm tofu and chickpeas instead. Love the play on words (nerdy laugh). It went over great for me – not so much with NPY who is even less into beans than I am. Except for soft bean curd.

A long, long time ago, I bought dried chickpeas because it’s super practical, about a liter’s worth. Finally, in order to make a roasted chickpea dish, I opened the container I constantly forget about and busted out one of numerous coloured Ball mason jars I have and soaked the really old chickpeas. Using up pantry items – especially those from the back corner – is so satisfying. 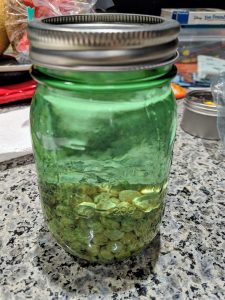 A while back, I bookmarked a Chatelaine recipe, Lentil and Beef Spaghetti Bolognese that was intriguing. Could the continued presence of ground meat (turkey in my case because I’m also ceasing to cook red meat), mask the lentils? I was a super easy recipe as you don’t need to cook the lentils separately. I used herbes de Provence instead of Italian seasoning and NPY broke my pepper mill so I can’t grind black pepper into anything. Despite trying to overcome that, I’m not in love with this dish.

Last year, I made mushroom bolognese and – because of the lack of beans? – I thought it was really tasty. Even though I ended up using my immersion blender because I was tried to chopping so many mushrooms. Maybe my lentils were getting old. Gosh, I was happy to use up a whole cup of the small package I had left. I get way too optimistic that I will cook lentils. I still have a giant – for the rate I use them – bag of green lentils in my pantry.

I didn’t prepare enough spaghetti for us all to eat so I had mine Sloppy Joe, which wasn’t bad. 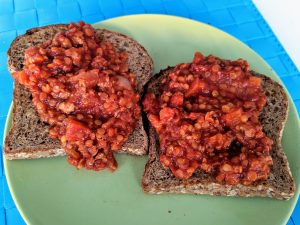 When I was flipping through the Oh She Glows recipe book, I eschewed making a Caesar salad but noticed the instructions within on making Roasted Garlic Chickpeas and that is what I saved the recipe for. There I got re-hydrating really old chickpeas and I think it basically is a good recipe except that in my table-top convection oven, even 32 minutes at stated 400 degrees Fahrenheit is too much. The receipt recommended between 30-40 minutes. I served up the less than half yield that was not burned during our viewing of the third episode of the final season of Game of Thrones (Oh My Gosh). Consider them healthy version of beernuts! My original plan was to have a bean-inspired platter for the GoT viewing complete with chocolate hummus, but I didn’t arrange any good complements (pretzels, apple slices) and I wasn’t 100% sure about how the taste will go over. It was something of a pain to make because it seemed too thick at first – pretty much up front, I added the two tablespoons of water that you’re supposed to add as needed. It’s like a “healthy Nutella” and so I brought 118 mL of it to work to spread (really thickly) over slices of Squirrelly Bread. (I don’t get the big deal with Squirrelly Bread.) So vegan activist and influence Erin Ireland discovered chickpea eggs recently and so have the rest of us. Apparently it can resemble scrambled eggs or be formed into an omlette and a truly egg-tasting alternative especially if you don’t want to go the tofu route. Now I have a small bag of chickpea flour from Whole Foods and a tin of  Shani’seasoning from The Juice Truck to see if chickpea egg can be my egg replacement in one of my meal plan staples, tomato & egg.

The truly egg (read: sulphur) tasting ingredient in Shani’seasoning is from Himalayan black salt (kala namak) which being used in South Asian cooking, I might have found at Joti’s No Frills near me but I was having lunch at The Juice Truck and got the Shani blend. A co-worker told me that I could have gotten the chickpea flour for cheaper at a South Asian market, too.

My first attempt is not my last. I didn’t have the time to look for a recipe suited exactly to my ingredients, the fried egg consistency I wanted and the seasoning I had so I winged it. Half a cup of chickpea flour to one cup of water per Erin’s IG stories (a screenshot I took) and 1/2 teaspoon of Shani’seasoning in a hot stainless steel pan gave me approximately the four egg volume (eyeballed) I would have used.

Chickpea + water was really watery and then got thicker in the pan. However, it wasn’t solid and when I wanted to flip it, it started to stick in the center and I had basically pushed a clump around and it was cooked dough which was easier to cut up when it was cooling. Shani-seasoning is very eggy smelling but I hadn’t used quiet enough – it’s a bit scary to use one whole teaspoon but Shani is a blend of spices and salt. Sometimes I make a great egg crepe (lots of oil) but sometimes I get careless and my tomato & egg dish is clumpy.  Yesterday’s dinner was the latter in terms of looks. Chickpea egg (my first time preparation) is denser than how fluffy eggs and can be but I’ll experiment with a non-stick pan and smaller volumes of the chickpea+water mixture and see the results. It’s a really decent looking and smelling substitute for eggs and but I figured that chickpea flour has only about half the protein that eggs would have. 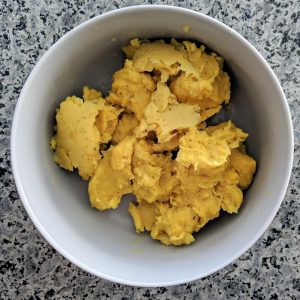 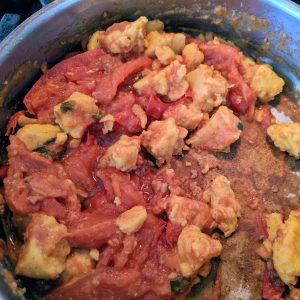