Six episodes in the final season of Game of Thrones and each of them was a viewing experience.  I ended up making a mini platter for each one, flexing some mini entertaining muscles that are otherwise very dormant in between.

GoT S8E1 – I put together my first charcuterie board ever using three types of meats from a Costco 2-pack that usually costs $9.99 and it was 20% off that day. For episode 1, it was just me and NPY so we had leftovers and I ended up eating like nine slices of meat in a DELICIOUS sandwich the next day with the leftover Camembert. Cheese ends were purchased from Whole Foods and I served up the softer cheeses, saving the harder cheese for the next week when TS would be over for a GoT viewing.

GoT S8E2 – TS came over and it was thus easier to finish off the second of the two-pack of charcuterie (expiring at the end of April so, in the nick of time) with Boursin from Costco (LOVE), a hard cheese purchased the week before from Whole Foods, and more cheddar. This time I rolled the meats all fancy LOL. GoT S8E3 – Served up a very ripe melon (not cantaloupe) from Costco, the least burned of a failed attempt so make roasted garlic chickpeas from an Oh She Glows recipe (“healthy beer nuts”), and grapes from Costco for quick & dirty viewing platter. I also tried to make chocolate hummus but that was not tasty enough to be unleashed on anyone nor did I have a good item to dip in it (I ended up having it a couple times on toast as if it was a super healthy, bland Nutella). 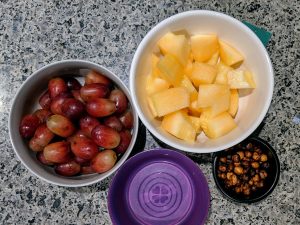 GoT S8E4 – I can’t remember what I planned or didn’t plan – I think something was not presentable (edible) so it was just the blueberry chia seed jam I just made that day from an Oh She Glows recipe on a couple slices of toast. The guys will always have their beer.

GoT S8E5 – I finally got to use my Mickey Mouse-style ears  dish! I made tofu ricotta for the second time, with the correct amount (~220 g) and type (firm) of tofu (Korean & organic) – I taste the tofu but enjoy it and NPY couldn’t (HAH) and in the other ear was a somewhat failed attempt at black sesame seed paste (looks like caviar??). I baked a cornbread loaf from a mix (it was the second half of the box) because I know TS (or especially his spouse) really likes good cornbread (which this one wasn’t).

GoT S8E6 (finale) – I used the Mickey Mouse dish again! It was tofu ricotta redux for the finale but a different recipe that was not as satisfying but at least it was pair with super flavourful salami left over from pizza night back on Monday. And the other offering was Trader Joe’s gingerbread loaf – yummy. We were in a tizzy all day because kiddo had some bad fever and cold symptoms but meanwhile my brain was spinning on what to make. In the end, I didn’t end up watching the finale because kiddo wasn’t sleeping fitfully alone. Nor did I watch it the next night (tonight) because kiddo is still sick!