This week of work is my last week of work for some 80 weeks … ! To celebrate/mark/get through this milestone week, I treated myself to a work week’s worth of Planted Meals (full price, too!) and I was super excited because it was all different recipes from last time. In addition, I qualified for one free chocolate chip cookie (for filling out a survey), and could get on a new chocolate brownie being offered. All I haven’t tried (that I want to) is their wrap, which I hear I can pick up at Body Energy Club locations. This week, meals were ready as early as 4 pm (stated to be 5 pm on the website) and I was informed of such by text message. It worked well, in that I was doing a Costco run at 3 p.m. and could swing by 401 Industrial Ave on my way home. My phone battery died early in my Costco run so when I got to Commissary Connect, I was banging on doors for a few minutes until someone from the closest kitchen couldn’t stop ignoring me as I was also waving at them through the grate below the metal gate. She didn’t know where I should go to find Michael or Planted meals but the guy in the Rolling Cashew kitchen pointed me upstairs. I think normally people wait outside and call and Michael would bring it down. Instead, I got to walk through the kitchen we also know To Die For Fine Foods and Conscious Cookie Co. is made.

Knowing that they pack their meals in giant London Drugs reuseable tote bags, I brought back the one I received last time and was happy to not be adding another reusable tote to my burgeoning collection.

NPY reminded me of things sounding better than they are and declined my offer to pay for a week of meals for him as well. Regarding vegan meals, he doesn’t need it, it doesn’t sound good to him, etc. Such narrow-mindedness should be bashed out of one’s skull. But since “men don’t change”, then I just have to train the new generation better.

Since the last time I ordered a couple of months ago, Planted Meals have gotten a more commercial operation to help with meal prep and thus their cut-off time was bumped earlier from Fridays at 3 pm to Wednesdays at 3 pm. You know how you get worried when things get more commercial …

RICH FUDGY BROWNIES Incredibly rich and fudgy, these brownies are chocolate heaven.
We enjoyed this on Father’s Day and the day after – my el-cheapo way to treat NPY along with 2-for-1 espresso drinks from Blenz, lol – with Lemon Tart ice cream from Earnest (a pint of which he bought). While NPY prefers a lighter chocolate cake, he had no complaints about this brownie and neither did I. CHOCOLATE CHIP COOKIE One of the initial hooks for me to try Planted Meals the first time was the proclamation that these are the best vegan chocolate chip cookies ever. But … the recipe seems to have changed or the dates were not broken down enough? It was not as satisfying as last time. Kiddo might have noticed because he wasn’t as enthusiastic to finish his portion.

VEGGIE POWER BOWL Seasoned roasted yams, shredded cabbage, cherry tomatoes, lentils and smoked tofu over a bed of greens with a sweet dijon dressing on the side. This is a new meal offered and I kicked off the week with it. Also because it had the most fresh/raw greens I didn’t want to get slimy or gross – it’s not getting any fresher! The dressing had an unexpected little kick by which I mean I enjoyed it. All the proteins were tasty (smoked tofu, sweet potatoes, green lentils).

NPY queried with some heavy skepticism: How are those meals filling? They look so small. Oh but they are, and without leaving you being sick from eating too much in the end. WATERMELON POKE BOWL Seasoned sushi rice with house-made watermelon poke, marinated cucumber salad, and edamame garnished with seaweed, green onions and sesame seeds, with a side of wasabi mayo – On first glance, this meal had an immense amount of mayo and rice under the watermelon was drenched … all the more flavour! I stirred it up and dug into it at room-temperatures.  The watermelon was highly marinated and barely tastes like it any longer – it had a little crunch to it so you know it’s a vegetable (fruit) – the dish was overall a bit salty but otherwise super-filling and tasty. PEANUT BUTTER NOODLE SALAD Chow mein noodles with edamame, carrots, red peppers, green onions and smoked tofu with a delicious peanut butter chili dressing Funny enough, I would never buy “chow mein noodles” to make at home but enjoy when other people make it in a dish like this. I was getting a little worried that some funky smell coming from my fridge is from one of the Planted Meals, it could have been from my fridge in general or the sink, though. Just because the meals don’t have meat doesn’t mean something can’t go off – I hoped it’s just the funkiness of vinegar and chili in the remaining three highly seasoned dishes. I was trying to be strategic in the order in which I’m having the meals but five days since Sunday in my questionable fridge – had a Costco run on Sunday and it was packed earlier in the week – the door seems not to close so well earlier in the week.

Otherwise, the peanut noodle salad was one of the first dishes I had heard of so I was eager to try it. They use a great smoked tofu and the meal was colourful with fairly tender-cooked vegetables – otherwise I wouldn’t enjoy cabbage or peppers! BUTTER TOFU Tofu cubes simmered in a butter-less spiced creamy tomato sauce over white rice, with a side of green peas and topped with cilantro – I remembered to request at the time of ordering that I didn’t want cilantro and now that Planted Meals has a different operation for preparation, I got a response that my preference could not be accommodated. Phooey. But they did! Because it was just a matter of not topping this meal off with cilantro, which would have been nasty because I forgot to check on the cilantro content of this dish until the day I enjoyed it, on Thursday.

This is definitely not the best picture being that the meal was cold, straight from the fridge  and the sauce was still solid. I tipped it into a plate to reheat and that picture wasn’t any prettier. As goes with anticipation, it wasn’t quite as dreamy as I want butter tofu to be but it was still solid. 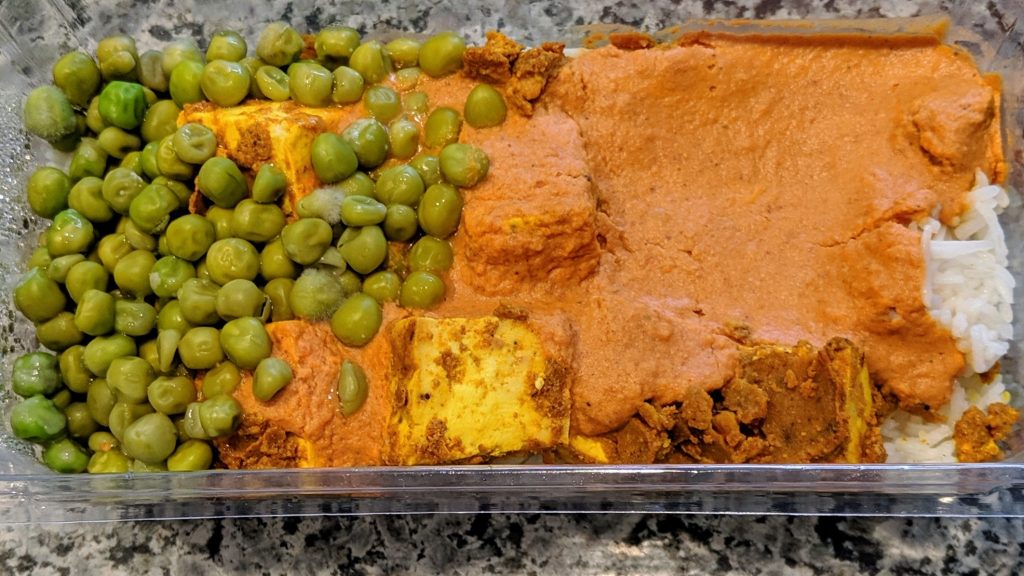 PESTO ORZO SALAD Orzo pasta in a house-made pesto sauce with peppers, tomatoes, spinach, red onions, olives and pan-fried Field Roast Italian Sausage We’ve gotten to the end of this seminal week and I’m so happy to be capping it off with a delicious sounding vegan lunch. 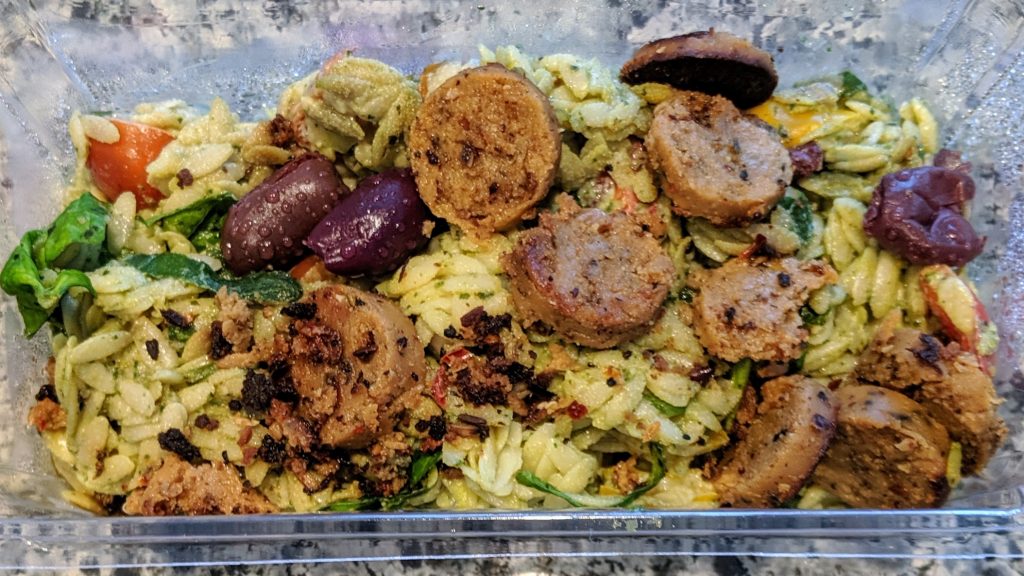