As it happens with the second child, you draw parallels in their development and try to be as fair as possible to both children. You’re going to find me finding the fun – through crafts and photos – acknowledging these two.

Since we knew the name a few months before she was born, I was at Michael’s about a month before she was born to pick up supplies to make her an name initial door doo-dad – I don’t know what to call it! Originally, I was going to Michael’s with Andrea after we went for a work-out together or something but then NPY scheduled something and I had to cancel the Michael’s portion. But I forwarded her a photo of the white “P” letter I purchased as she would have been present as I purchased it otherwise. Armed with just a couple of clues – starts with “P”, ends with “E” – she quickly guessed “Paige!” after a Google search gave her confidence to guess that. I had to play it down and not give her the satisfaction of having guessed so quickly!

This time around, I used a lighter weight scrapbooking paper for the background – the blue marble – and it was horrible given my lack of patience to glue down straight when the “P” trace wasn’t the most careful. I even glued it down in section over days and still f-ed it up. Good thing the marble pattern somewhat obscures the wrinkles. =S Her name is almost too long for the letter’s height but with some staggering of the letters, it just fits. At first I worried the offset would throw off kiddo who learned to spell her name from the name initial door doo-dad, but he was able to read the spelling without a hitch. Finally, I looked for another wooden animal that was complementary with kiddo’s lion. Michael’s no longer carries that set of animals and the news ones are bigger, more expensive, and glitter! Further, I couldn’t be entirely complementary as kiddo’s lion is symbolic of him being born during the Leo sign. Meanwhile, baby was expected to be born under the Cancer (crab) sign. Instead, I was inspired to create a 3D flower out of scraps of foam I have around and had complementary colours.

Then I posted it to Instagram because I did post four years ago with kiddos’ name initial door doo-dad.

While crafting, it struck me once again how wild it is we got to name the little guy. Hope he likes the name we picked! Also wild, that he’s for keeps. #pinterestwin (He’s a #Leo.) 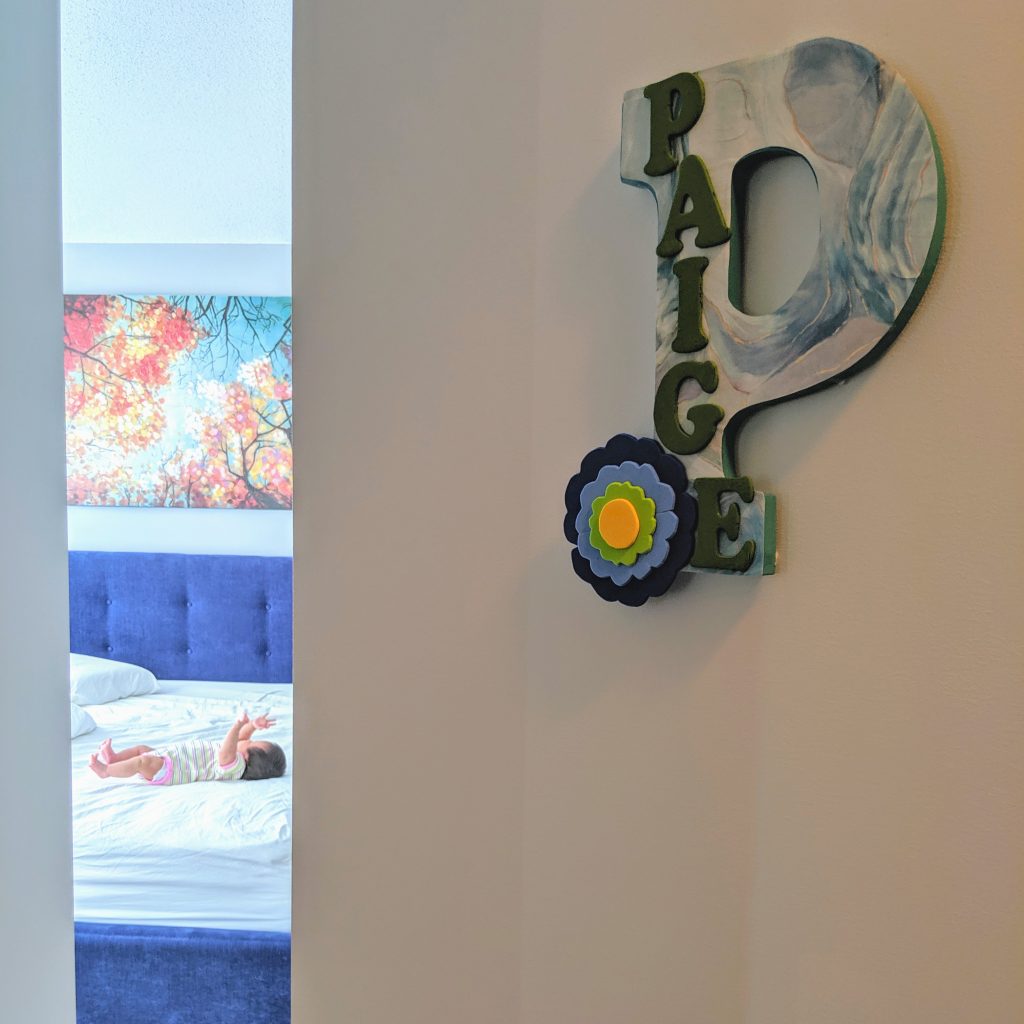