It has been on my mind more and more that I need to make meals faster and spend more time with my family. It’s confounded these days as I’m not at work and so meals don’t have to be less complicated or quick to make: I just need to have dinner ready before they get back from work/daycare/grandparents’. However, in time, I’m back at work and there are two kids’ needs to deal with and we might be living farther from work, requiring a longer commute. It wouldn’t hurt to work through some recipes to figure out which dinners work and which don’t.

A works-from-home daycare mum told me she works part-time from 10 a.m. to 4 p.m. at which point she starts dinner – “usually boiling pasta”. She does daycare pick-up around the same time I do at 5:30 and presumably dinner is ready when they get back at home at – presumably – 6 p.m. When I was at work, whether I did daycare pick-up at 5:45 or NPY does the run out to his parents, dinner is ready between 6:30 and 7:00 – a far cry later. Dinner is over at 8 p.m. and you can see how kiddo has a ridiculously late bedtime. And I spend an hour making dinner and not hanging with him. “Boiling pasta” and having simple, nutritious pasta dinners heavy on rotation to get you through those years when the kid(s) aren’t so independent or helpful in the kithen is a small price to pay to be available for them. That is my conclusion.

Which reminds me of the book I read last year, The Happiest Kids in the World: How Dutch Parents Help Their Kids (and Themselves) By Doing Less, which compared Dutch dinners which are held earlier, have simpler fare and the family can eat together and have quality family time to French dinners which take place later and have more complex cuisine that takes the evening to prepare. To wit, the family that eats together is happier and the food isn’t the star of the evening. And there I was telling the Dutch daycare mum about the book I read!

From the meal plan that I started over 18 months ago, I got proficient at a few dishes and figure out which parts I could make-ahead or prep to save time. For example, I can soak and chop Chinese mushrooms and maybe even marinate overnight. They are some of my favourite dishes which happen to be very traditional home-cooking, and will continue seeing heavy rotation if not just because NPY and I like it – so the kiddos know home-style Chinese food! Ten years ago when I was still struggling with recipes and never commited to perfecting a dish, I thought my future kid(s) would only know terrible Chinese food at home but somehow they will be eating some fairly authentic Chinese food, even if I feel less authentic now. The Internet is great that way. By the way, those dishes would be tomato & egg, steamed chicken with fungus, minced pork patty, mapo tofu, and braised minced meat and fuzzy melon!

Okay, that was a small aside.

I was at Wal-mart with a gift card burning a hole in my pocket when I was in the canned/Tetra-pak soup aisle and the multiples offer was reeling me in. So, also, was the label that stated that such-and-such a cream soup is ideal in such-and-such a recipe, full details at the Cook With Campbell’s website. So, upon very careful inspection and consideration, I ended up wth the following soups and then had some fun in the week following the recipes pretty much to the letter.

My conclusion on each recipe is based on simplicity of ingredients and if the taste was worth the shortcut of using the canned (read: preservatives) soup. My notes below … Fresh ingredients included staples like onions and garlic and the oddball whipping cream, it wasn’t difficult to make, truly was quick and the umami flavour elevated the dish. This recipe is a keeper and I’ll be on the look-out for other brands that have a red pepper-tomato soup. 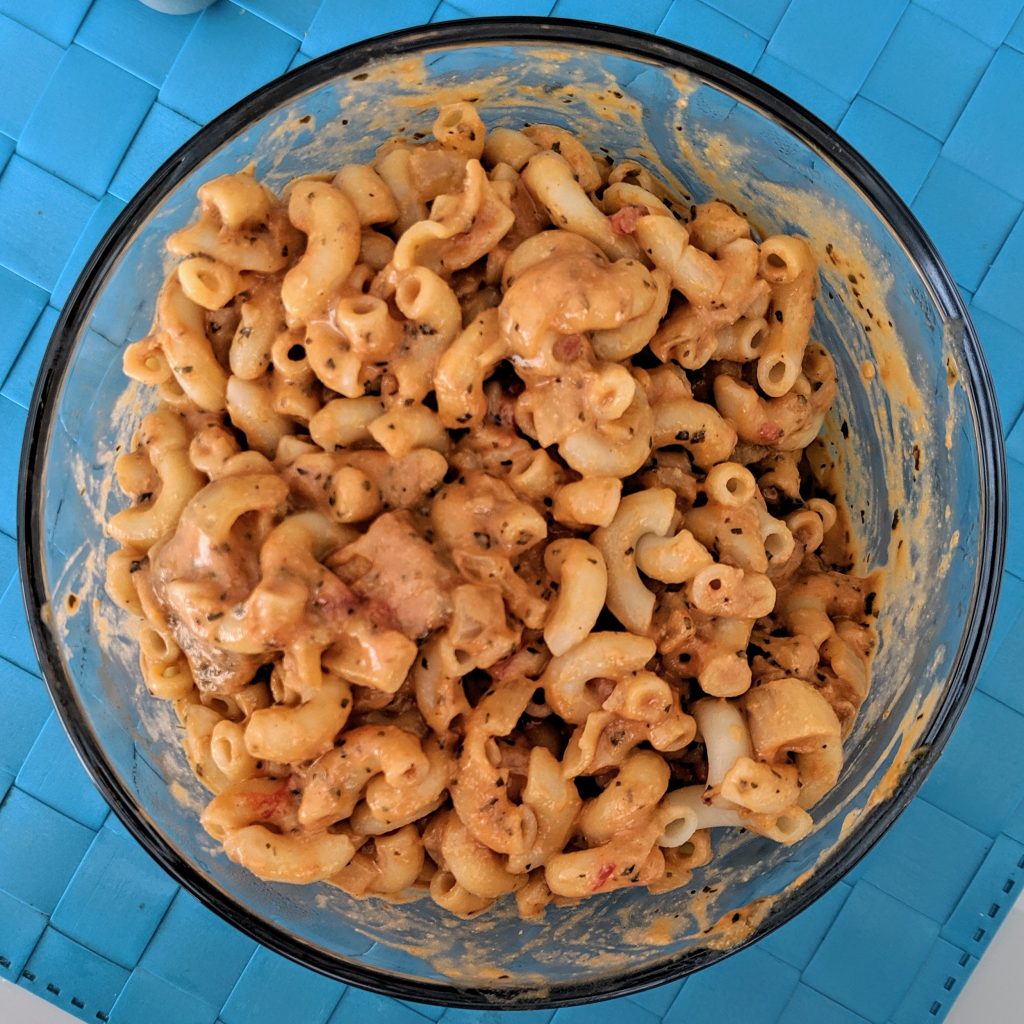 To this recipe, I added chickpeas to finish off what I had in my pantry and added spinach at the end – it is that flexible a recipe. I don’t have a slow cooker but it is adquate to simmer for 30-90 minutes. Flexible. While it was nice to get the variety of vegetables, I don’t see the Campbell’s soup as having been essential to making chicken stew so I’ll pass on this recipe. 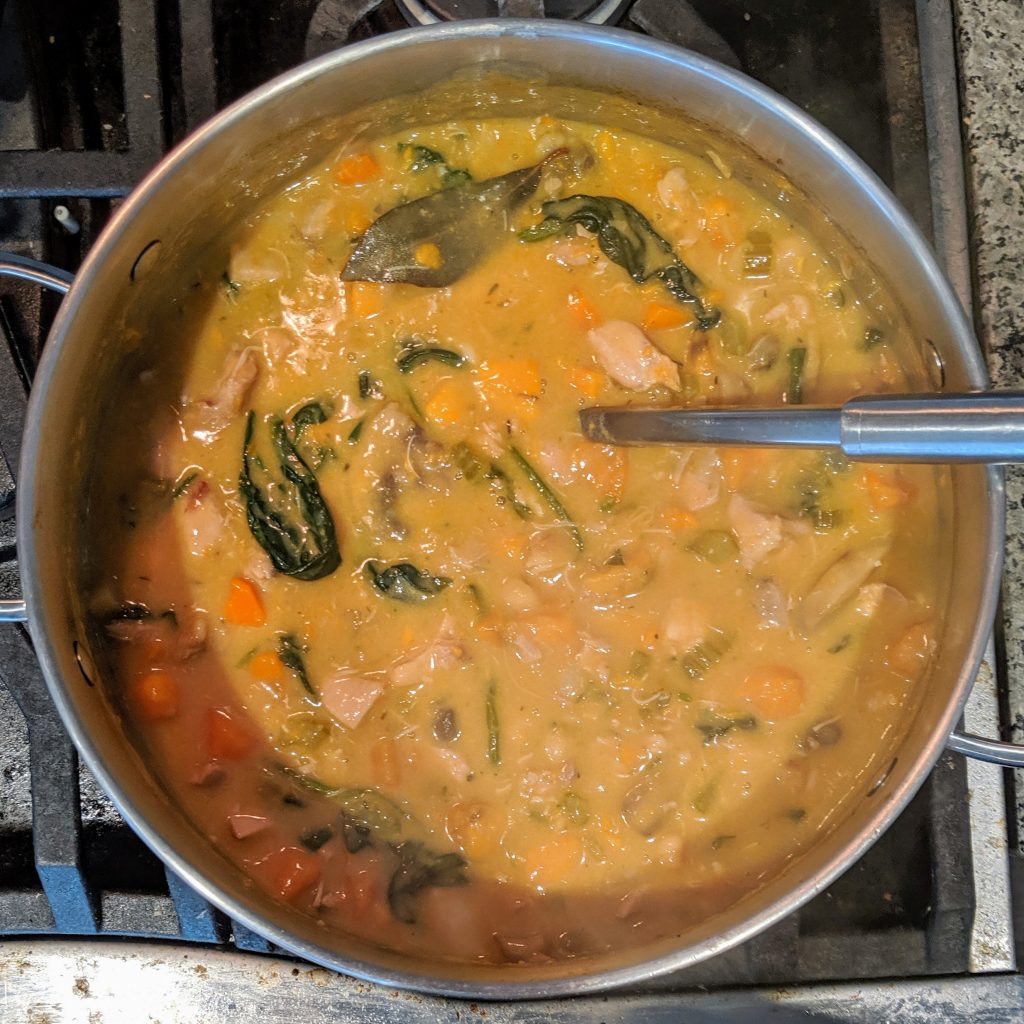 NPY’s favourite pasta order is linguine vongole and it’s super easy to make a crappy version using canned clams and I’m going to used canned clams because the thought of using fresh, sandy clams freaks. Me. Out. I just have to come across a good canned clam linquine recipe. This one was a bit bland when I followed the recipe strictly. I added salt and some squirts of Trader Joe’s Umami paste and it was somewhat salvaged. There is room for improvement but it’s a mediocre clear sauce to start with – also, mine was “in water” instead of “in clam juice” so maybe that was some of the difference? 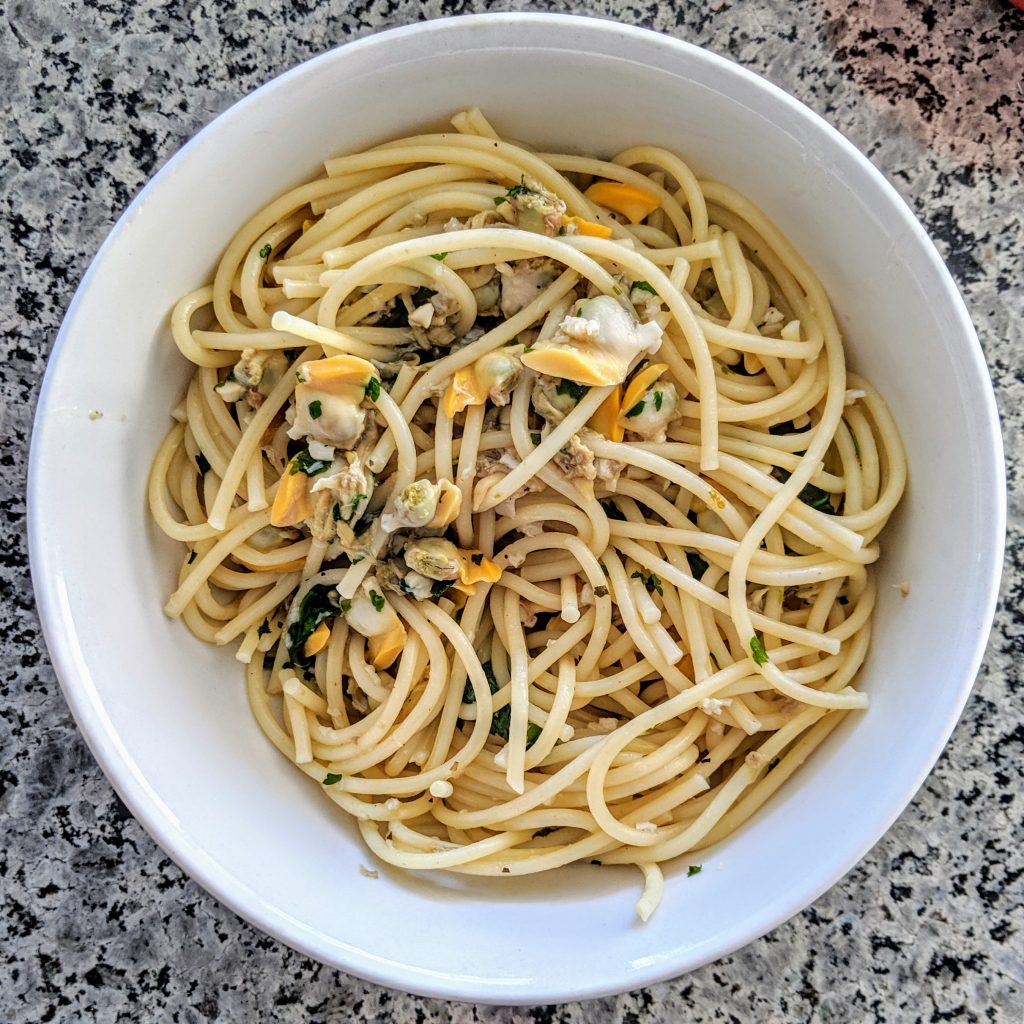 This smelled amazingly good while being prepared and tasted milder than it smelled. I was thinking it’s not very child friendly a dish but I should have given kiddo a taste to expand his horizons. Because, I figured, it’s just drinking straight broth. Hey, $2 French onion soup appetizer? It’s not bad! 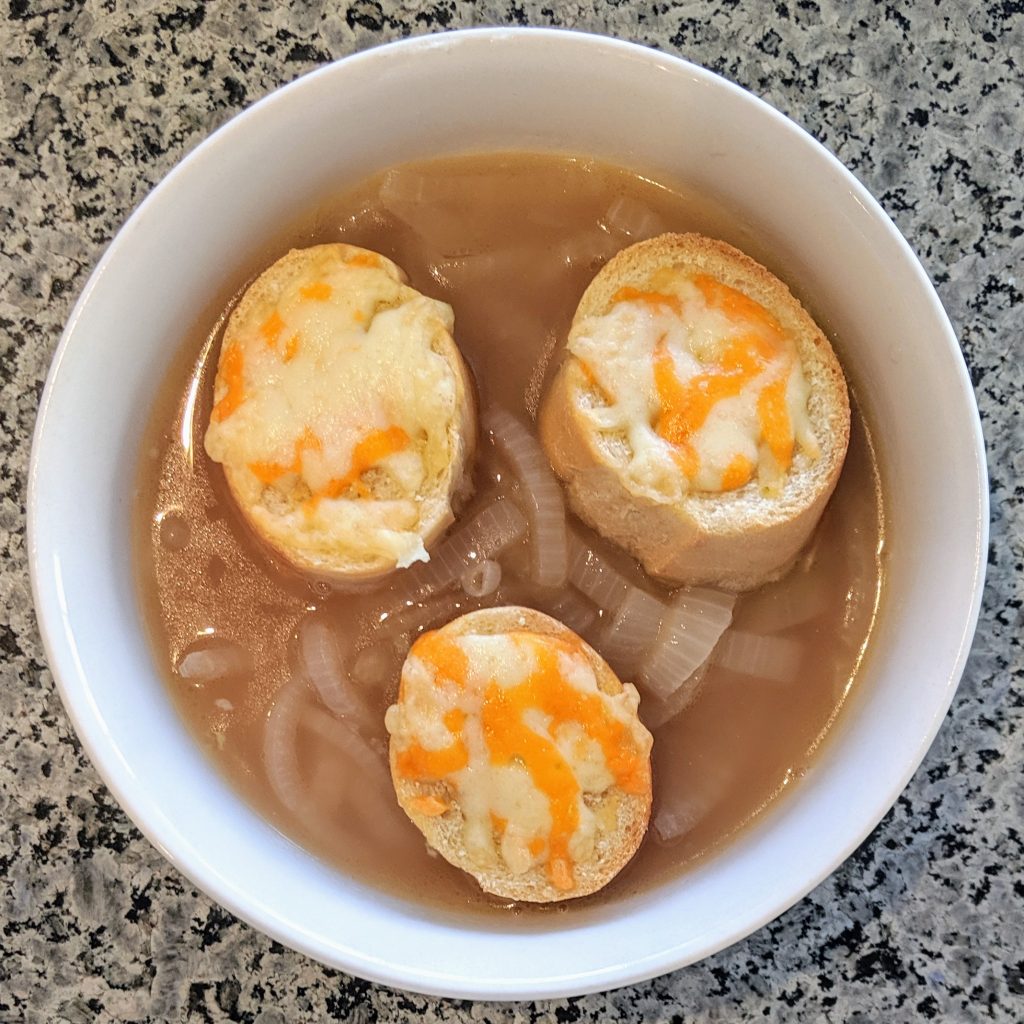 No matter the verdict, I need to make mac & cheese more often because now I own a bag of panko bread crumbs! Despite the 1 cup of shredded cheese, I could suss out the creamy soup base. That’s not really so bad every other mac & cheese. This was super easy to make and not difficult to time with ingredients such as milk (we have 3.25% in the fridge always and shredded cheese can be purchased beforehand) – I’ll make this one again. 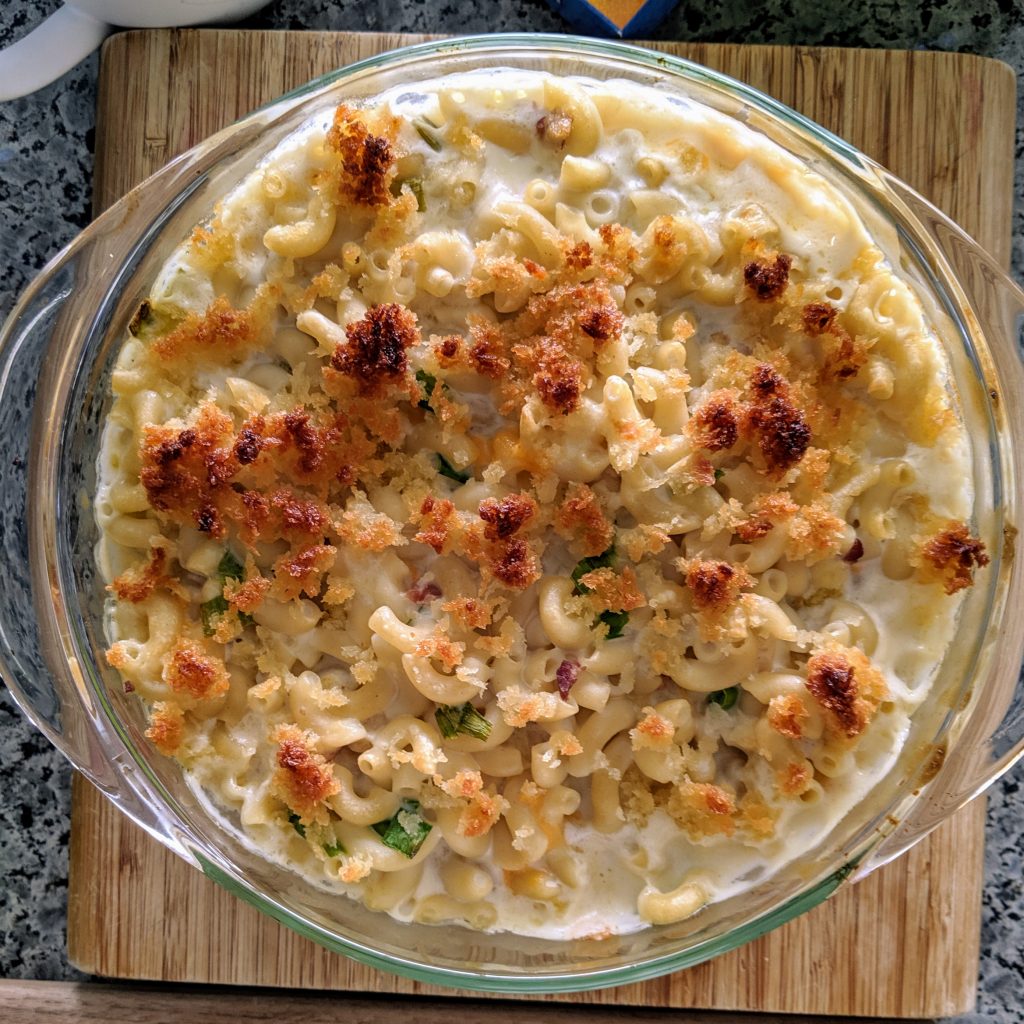