I’ve been working on this post for quite a while and life my lifehacks (Part 1) post, there really is no end to it. So at some point, I will cut off this list and just post and here is a guarantee there will be a follow-up post. This post itself is following up on my debut Conscientious Change post.

The following are things and thoughts that are recently (or not so recently) occurring regarding living environmentally consciously.

We don’t order a lot of take out so I really have to be on the ball to remember to convey the note that we don’t want single-use cutlery and serviettes. (But don’t hold back on your housemade condiments!) I get through packest of ketcup and soya sauce and serviettes tossed in but the chopsticks and plastic cutlery accumulating and I can’t/don’t (want to) move drive me up a wall.

Who else has an overflowing stack of take out cutlery??

It’s not a recent change and here we get personal: instead of feminine hygiene products, I use a DivaCup. I recall that I started at least a year after kiddo was born, when I needed feminine hygiene products again. It’s easy to remember because when I had to consider what size to get, I fell into the category of “having given birth”. It was not the same after having had a child and I was tired of paying for disposable napkins and being wary they did not have capacity. There was a bit of a learning curve how to handle the DivaCup without creating a huge mess and you thus have to time your bathroom breaks so you don’t have to deal with it when you’re in a public bathroom. But I felt good to have one product to handle the flow and not have to try to carry an inventory of Regular and Super (Plus) tampons and pantyliners, etc.

With a gift card, I got reuseable straws from David’s Tea. I didn’t want to order straws from Amazon sight-unseen even if there are hundreds (thousands) of glowing reviews.  David’s Tea had a manageable number (six per pack) when I knew I wanted more on the order of two or three. However, it was a bit short-sighted because they didn’t fit into the cutlery holder that I tote around for kiddo’s cutlery. Thus I ordered a Final Touch stainless steel one that travels well and is adjustable to different lengths as you need.

NPY and I were at a Chatime where I pointed out to him a woman who brought her own 1L (or 750 mL) wide-mouth mason jar with the straw lid and wide stainless steel straw. I remarked that seeing that made me feel bad. NPY said it didn’t make him feel bad or stir any sentiment similar to mine. The shame! That incident definitely to the ball rolling in my head …

In July, I started my new temporary life as a stay-at-home mom of two. It seems that my “latte habit” kicked up a notch with my new schedule, going for a walk every day, being allowed to have all the caffeine I please again, and needing caffeine more these days!

I’m super-late to the game but here I am bringing my own mug/cup. NPY and I are pretty bad when it comes to handwashing containers with lids. There’s kiddo’s straw cups that take priority and then we get around to our own and I loathe lids that have nooks and crannies where water and sugar and mold and soap will remain. Thus my BYO coffee cup is a super-simple one that I got from 7-11 when I joined their rewards program (expressly to get that cup for free – I thought it was cute at the time). You see that smoothie cup everywhere in that blue hue and then look closer to see if it’s also from Body Energy club. I got mine in a gift bag after attending an Equinox yoga event and it’s been a workhorse for toting water and – on that day – a smoothie from Body Energy Club. The reuseable cup that was so appropriate for bubble tea and it was serendipitous I had it on me that day, was the “Venti size” straw cups that, in my case, I receive as work swag. The narrow straw is no good for tapioca bubbles I’m not inclined to order and hard coconut/lychee/coffee jelly. So either I’ll order a bubble tea without “toppings” that you can’t get up through a narrow straw or I’ll order aiyu jelly which I could! 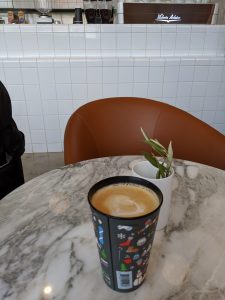 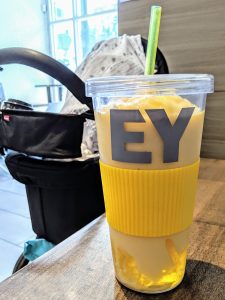 So I was gifted reusable food wraps but I don’t often use them. It all ties back to NPY and I being rubbish about handwashing everything in a timely manner. He certainly isn’t going to use them without explicitly telling him to in a specific scenario (e.g., “Please put away that half an apple, use the smallest Buzzee wrap – the one on the top of the pile.”)  and I’m slowly training him to put leftovers into Pyrex containers with plastic lids instead of dinner bowls with Saran wrap – so old-fashioned, wasteful. not stackable and not air-tight. So, I’ve reduced my Saran wrap usage in those scenarios and that leaves wrapping like cut fruit as the next common scenario. Okay, I will use it when the fruit is not too juicy … but you can see that I’m coming around…! 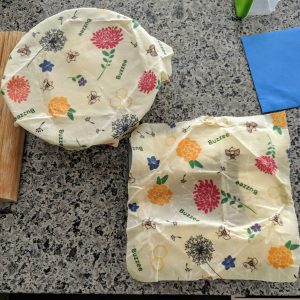 Also not new, but I was reminded of it recently – I use reuseable breast pads to line my bras. When kiddo was an infant, I went through several boxes of disposable breast pads and since they cost however many pennies per pad, I was reluctant to replace them frequently (e.g., as soon as they got wet) and sometimes used them until they were heavy and full! I couldn’t fathom that now that I use reuseable cotton ones that I bought as a six-pack in the wash. It’s like wearing a sanitary pad in my bra, something that is not clothing! The only thing is that I wouldn’t have to be so measured with replacing the pads if I had bought, say, a 10-pack.

London Drugs, which has a location a few minutes walking from my place, has these recycling stations that are a boon to the effort. In addition to accepting bottles with a refund, they take batteries, lightbulbs, styrofoam containers and “flexible plastics”. It’s the flexible plastics category that has been a game changer in the past few months. I finally have a place for plastics that aren’t wet with animal blood or vegetable run-off threatening to attract flies. I was pushing the limit of “flexible plastics” and then LD displayed clarification of what qualifies. The invidual packaging of rusks I previously would have thrown away without a thought but collected from eating at work to add to my flexible plastics bag. And it’s so telling how quickly we fill out the flexible plastic bag, just how much of our garbage consists of it. It has also made me more aware of “indivual packaging” and trying to avoid it where it is practical to. 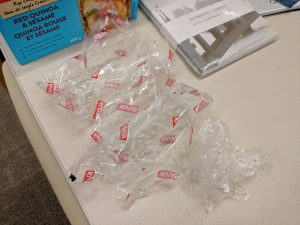 I continued to make compost soup for a bit so while we don’t compost :o :( at least I’m using the vegetable ends before sending to the landfill. I was addicted to collecting vegetable ends and having a diversity in order to make the most complex soup possible. But as I was preparing my post-partum freezer, I didn’t have room to keep a bag of frozen vegetable ends. Yet, I’m hyperconscious of what I would normally have collected and will resume later. 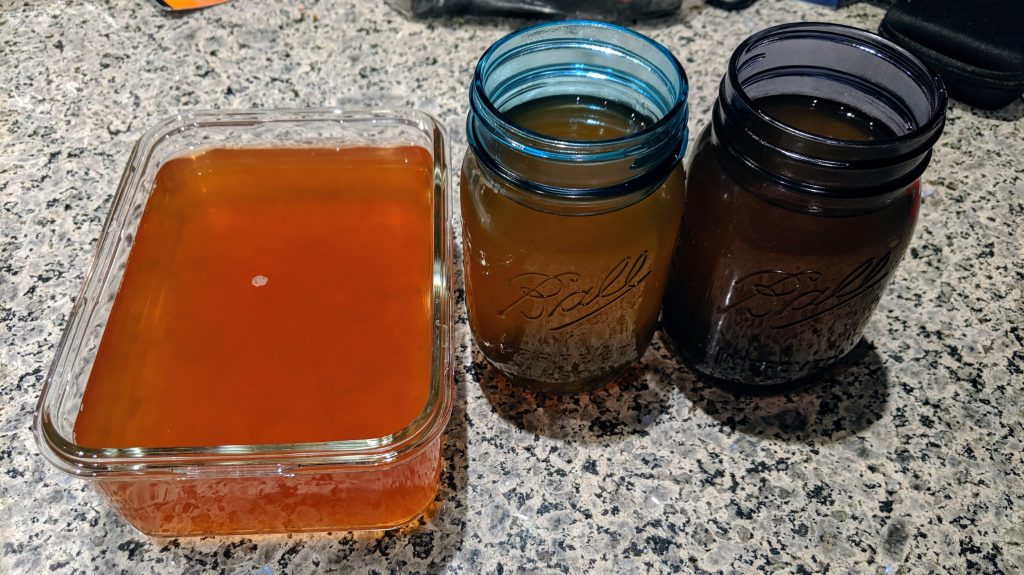 Neither NPY nor I care too much or have green thumbs but that doesn’t mean I don’t fancy a cute herbs container garden. However, the most practical thing for me to grow, I do and that is growing my own green onions by immersing the stalks we buy at the grocery store into a mason jar of water. It extends the mileage of a bunch of scallions that I buy, addes life to my condo, and saves me just a little on buying scallions.

On the food front, one of the most significant environmentally friendly experiments is to make chickpea flour egg seasons with Shani’seasoning. I have found a good recipe for fried egg and seeking others. It’s also a great feeling to include in my normal repertoire and usually have in my pantry and thus on hand, natural sweeteners such as dates, honey and maple syrup.

I finally started using the Rocky Mountain Soap Co shampoo bar I received for Christmas. Surprisingly and luxuriously, the lather you can work up is really great but I tend to save using the shampoo bar for the weekends as I feel that it takes more effort and time and who has time on the weekedays! But does the bar itself have super stamina? I don’t think so ….

At a certain point when breastfeeding kiddo, I stopped using the electric double breast pump – of which I was only using one side at a time – and pretty exclusively using a manual pump. With it, I felt like I had better control over the suction and there was no reliance on electricity! During the public health nurse’s home visit the first days I was home with P, I learned of the haakaa pump and it’s been a boon – also not electric and super easy to clean!