I am working on a complementary blog post regarding the month of eating approaching nutritous post-partum foods in addition to what I stockpiled. But could you imagine me and NPY not going out for a whole month! Hah!

Hugo’s Tacos & Churros Upon recommendation NPY found on the Internet from some pediatrician, we’d endeavour to not go out to a restaurant or to malls during baby’s first one or two months. Per traditional Chinese folk, I wasn’t supposed to be out of the house for a month or 40 days or six weeks or something. But it’s summer! And NPY is off work for two weeks and while it is essential time to figure out baby, it’s not all that difficult and we are kind of twiddling our thumbs on daycare days when kiddo has gone to daycare (next door). I had made a list of malls and restaurants to go to and those were all scratched off except for the outdoor outlet mall near the airport, McArthurGlen. NPY would normally want to have the same old Chinese food at Neptune but that would be indoors so we ended up having tacos from Hugo’s and a hotdog combo from Japadog outdoors and shaded by the building. It was brilliant and the nicest foray we’d have during his 12 days off. (12 July) 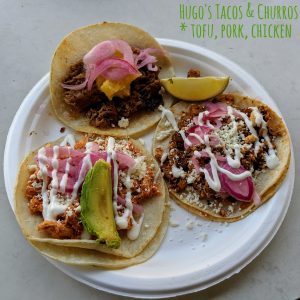 Oka-San Japanese Kitchen My former colleague Andrea was one of my first visitors and I was happy she was so eager and seeing her always brightens my day. However, I want a follow-up dinner when baby is older and more interactive. She thought about it an provided me with a few take-out options and once I saw Oka-San’s menu, despite it being farther on Fraser, I didn’t warm to her other options. I requested trying the spam musubi and carbonara udon – “excellent choices”, she said – and we got a mochi cake. (18 July) 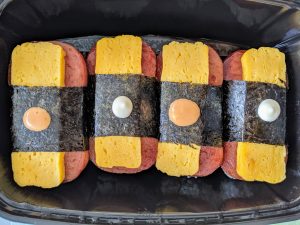 L’atelier Patisserie It was my cousin Alan who introduced me to L’atelier in the hood when he brought over a sampling of their croissants. I’ve been back twice now and and don’t see such an extensive selection any longer. In any case, kiddo’s birthday was my excuse to order a cake from them and showcase a local patisserie instead of the usual T&T/Michele/Yan/etc. But then I forgot to take a photo of the green matcha passionfruit mousse cake! (21 July) Body Enery Club I didn’t know Body Energy Club had moved into the hood until I received their mailer advertising three deals, only two of which I’ll take advantage of: 50% off a smoothie, 50% off a prepared meal. Over the years, I’ve received numerous mailers and that’s what gets me into BEC which I otherwise think is not my scene. It takes 15 smoothie purchases to get a free one and thinking back, I haven’t foregone a whole free smoothie, but I have forgone at least half a free smoothie by not providing them with a phone number. Turns out BEC has been in the hood, manufacturing for their stores from this 3rd Ave location and what is now a BEC Express used to be their office. What does Express mean? They have the full smoothie bar and prepared meals, but select supplements. That is a-okay for the likes of me!

I brought my own cup, a Body Energy Club one, no less, that I got after an Equinox yoga event. I’m not aware of getting a discount for BYO Cup but it’s good enough to feel good about it. Usually I get some peanut/almond butter cocoa creation but that day, I got a Cashew Latte. I’m back to the nut butter/cocoa creation next time! (22 July) 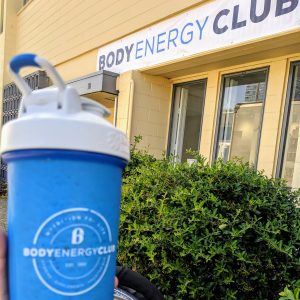 I was having a bad day with baby P starting to fuss as I was in the queue at Tims so I whisked her next door to the lobby of an older medical center building where I fed her and that was far more civilized than trying to do it at Tim Hortons where previously someone died. Tims was having a bad day with a growing queue and even though the cashier entered my order and I paid, the food preparers were asking everyone multiple times what they ordered and when they asked me several times, it seemed as it was taking even longer to prepare it. And of course I forgot – as I do – when ordering a burger to specify no ketchup. YUCK. While it didn’t taste exactly like a veggie patty, it was dried out and subpar to any burger patty too. (22 July) 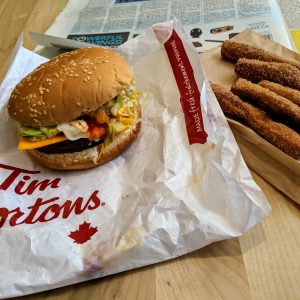 Juice Truck & Purebread On my first mat leave day alone – i.e., NPY’s first day back at work – I attended Juice Truck’s Mama Monday’s, finishing my up errands quickly to make it 10 minutes late, lol. I wasn’t there for the speaker especially after realizing that conscious parenting is not the same thing as conscientious parenting. But I learned that Juice Truck still offers a discount to people attending Mama Mondays. So I used it to try their seasonal smoothie which is Watermelon. While browsing the shelves and particularly at the Almost Chocolate smoothie mix, I realized how I never need to order that again because I’ve been making that at home for months and months now – it so closely resembles Oh She Glows’ Chocolate Hemp smoothie.

And to be unfair to Juice Truck, I’ll lump them with Pure Bread who is kitty corner to them on 5th Avenue because I will probably rarely go to Juice Truck without stopping in Purebread, too. What shall I order that I would never order with NPY or kiddo around? The lemon sugar bun! And so I leisurely sat in the vintage-styled cafe and ate a super-sweet pastry that made my smoothie taste sour. (22 July) 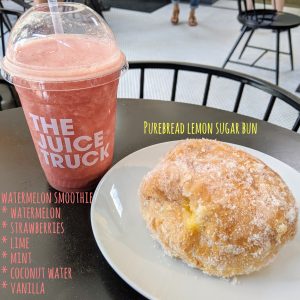 East is East Edna came to visit me, taking the afternoon off from work, to meet P and see how I’m doing. Like my best guests, she brings food and takes away the garbage. She offered to bring me food from East is East or Meet and I went with the former because I thought it would be better take out and I haven’t had food from there before. Funny enough, recently, I realized that when you Google my parents’ restaurant name, they do come up first in the search results and then local mainstay East is East is the second search result. The creamy – happens to be vegan – eggplant mushroom curry dish jumped out at me and it was so delicious I want to make it – I would never get the spices right! (23 July) 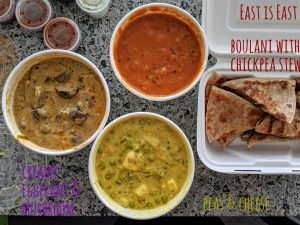 Swiss Bakery Wow, it looks like between Swiss Bakery and Fife Bakery (just across the street), I have my bread loaf tasting cut out for me. I hadn’t noticed their bread offering before. On kiddo’s birthday, I was on the way home from L’atelier who didn’t have any croissant to tempt me. NPY seems to really like Swiss Bakery who are open only one of the days on the weekend. He orders their jelly donut. I like trying different things. Knowing that I was having birthday cake later in the evening, I couldn’t justify getting a cronut (known there as a frissant) despite the amazing flavours that day. To select the genmaicha brownie I enjoyed, I usually ask myself, “What would I never eat with NPY and kiddo??” (24 July) 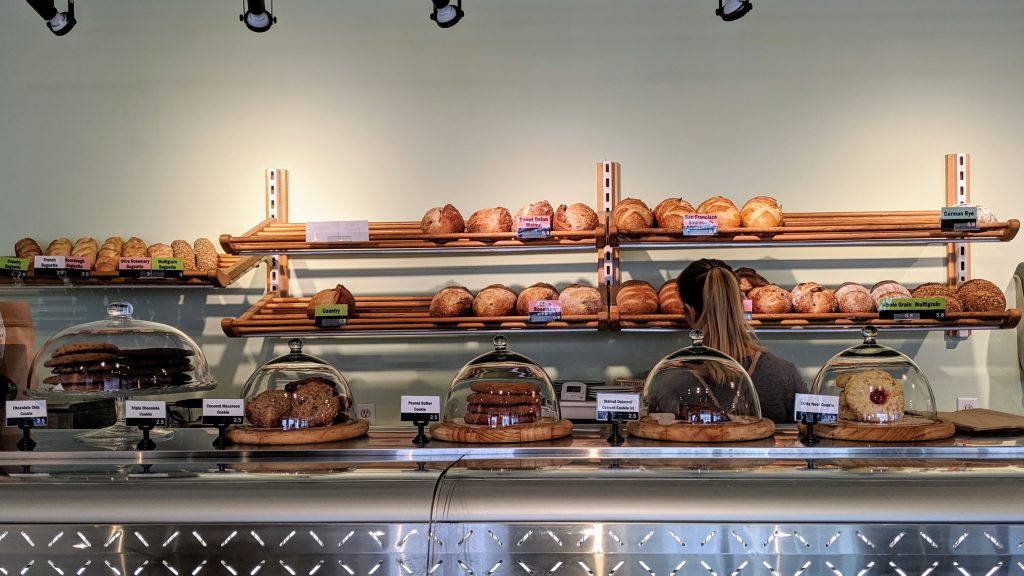 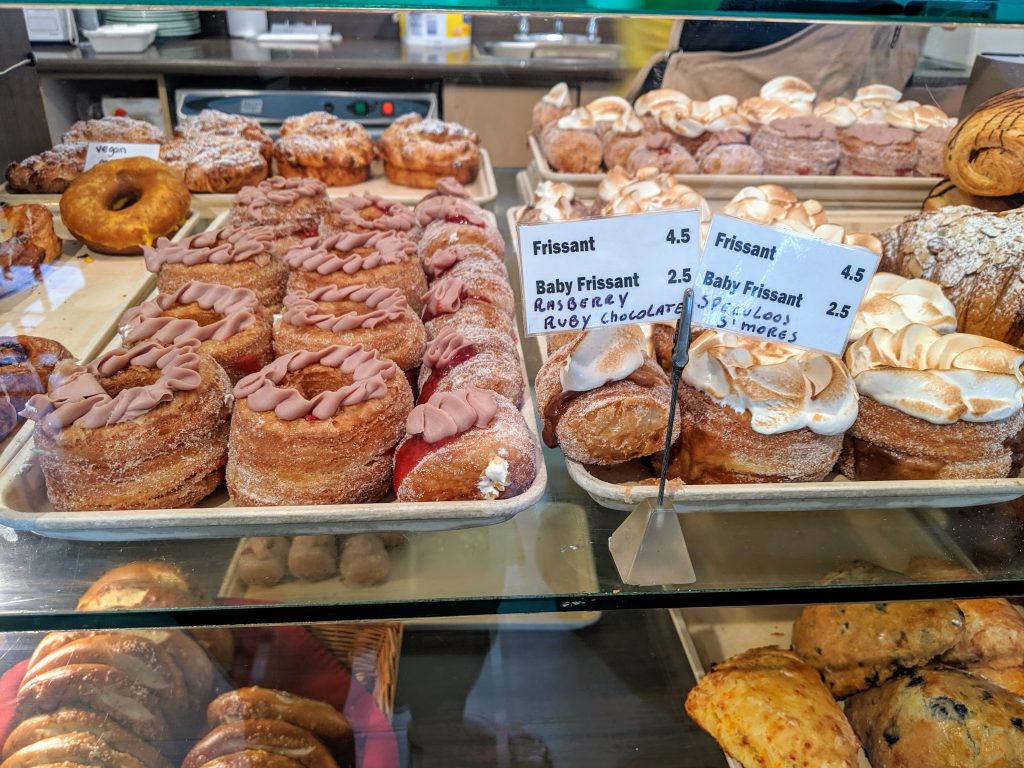 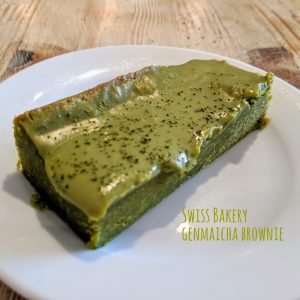 Sushi Loku I’ve heard plenty about Sushi Loku on Commercial thanks to Erin Ireland’s IG and photos of their vegan offerings. Since in-laws were coming over to our place, I could spearhead where to order and since it was a birthday, NPY didn’t have to be persuaded to go a bit fancier than Sushi California. The best part of the meal was the sushi and the best of the sushi was the aburi. One unfortunate switch was getting a tofu teriyaki don where I had ordered a tofu yaki udon – darn! 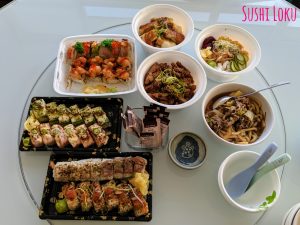 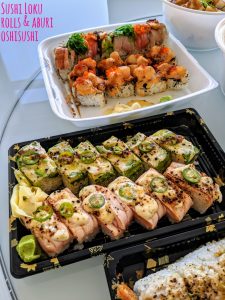 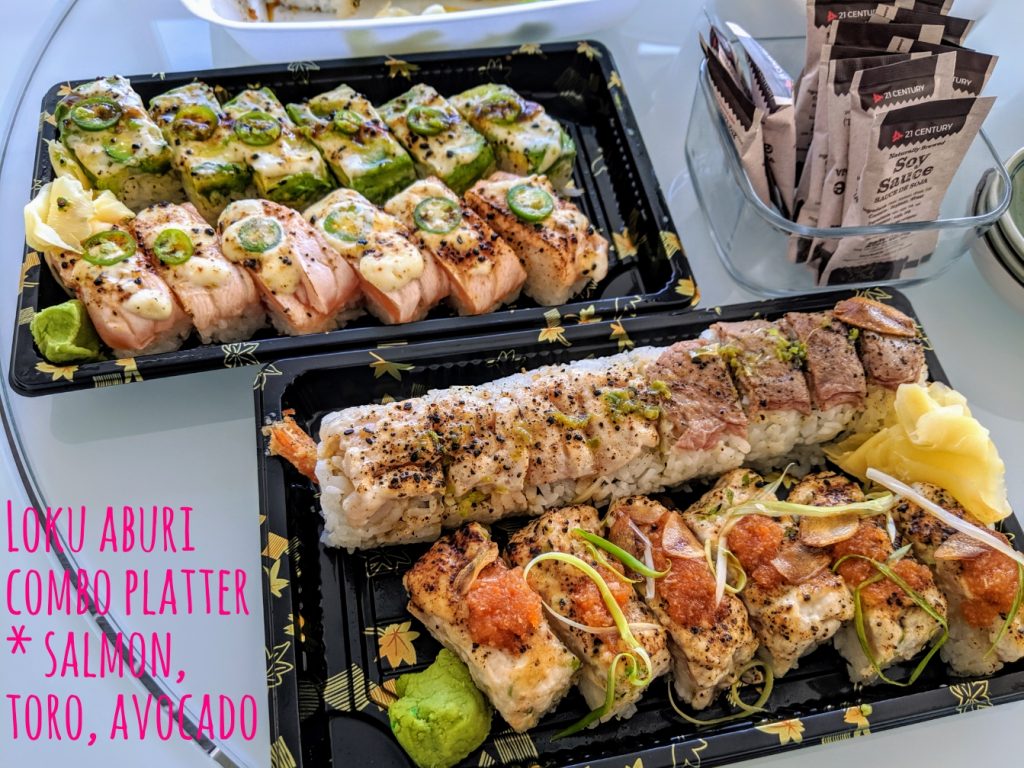 Umaluma One of my first social forays outside the house was with Andrea to check out the vegan festival taking place at Creekside park, between where she lives in Crosstown and I live in Olympic Village. It was a brilliant sunny, almost sweltering day when we got to the small but mighty festival. The queues for the food stalls were bonkers, especially The Very Good Butchers. I didn’t want to line up for anything! We looked at everything walked into Chinatown to Umaluma for some vegan gelato and followed that with checking out Vegan Supply across the street. It was the Drunken Cherry flavour that I didn’t know about the other time I went to Umaluma and that vegan activist Erin Ireland talks plenty about and it did not disappoint!  (27 July) 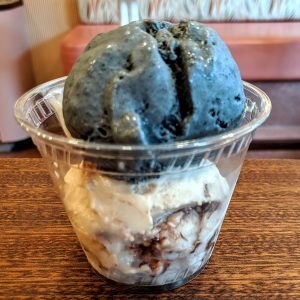 Protein House This shop has been half a block from my doorstep for a number of years and I’ve only gotten one smoothie from them. Now I’ve joined their loyalty club where I’ll get a free smoothie after 21 or 15 or something smoothies. The first “smoothie” I put onto my account was their Ultimate Acai bowl – because acai and because “Ultimate”. It was truly the product of a nutrional supplement store and I found the protein overpowering and the acai smoothie base generally not so good. (30 July) 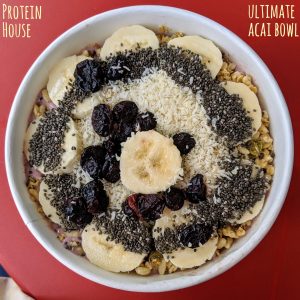 Fife Bakery & Moving Coffee What a neat shop in my neighbourhood. I wanted to try Fife’s bread after a colleague returned from working in Paris and has a bakery bread habit and mentioned it’s Fife for her and then Fido’s Xtra was five Entertainment Book deals of my choosing. One of them was 50% off a bread order up to $5 value. Here I go again but vegan activity Erin Ireland proselytizes Porridge Loaf and I gather it (and other loaves) aren’t available late in the day. I tried the country loaf instead and it was really nice to have the healthy, quality bread. Moving Coffee is a delicious find, if expensive. I learned how to order a latte which is a “10-ounce”, i.e., a “white” drink due to the addition of milk and it’s espresso that is topped to 10 ounces with milk. (2 August) 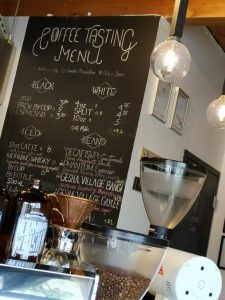 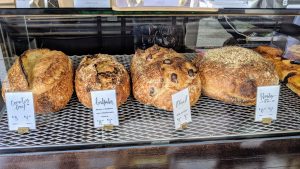