I had a sense of the existence of these things called toddler towers when Kiddo was a young toddler but it never connected with me. I’ve also long since known that there is an Ikea hack whereby you nail down an inverted side table to a footstool that is no longer available in Canadian Ikea stores. I never knew about the variety of choices or the price.

Influencers raved about the toddler towers they bought. (But of course you have to rave about things that you spent good coin on, I snark to myself.) First, Extra Petite blogged about hers, then Foodology got one from local company Tiny Trends Design Co last fall. I kept the local company in mind because Foodology did have a $10 discount code and put it on the wishlist for Baby for Christmas from the family. It was the only thing on the wishlist and they didn’t get it for her and that is fine. (They didn’t get anything from Kiddo’s wishlist either.)

Then my sister is feeling the need for one and we start evaluating the styles she turns up from Etsy and Craigslist sellers. Near and far (one of the Etsy shops was based in Russia), it seems like people are hopping into the toddler tower making industry if someone has a modicum of carpentry ability. We want to support local so I pointed her to Tiny Trends and it fit her aesthetics and she ordered one. Shockingly, it’s increased in price since before Christmas from $150 to $200; and the completion estimate is no longer within two weeks but eight weeks!

After she ordered, she pointed me to another local source (Craiglist) where she’s not a fan of the aesthetic but I haven’t seen a better price (starting at $100). I don’t find it too bad at all. Then Baby is so asserting herself, climbing onto any surface she can to be taller, to keep up with Kiddo climbing from his junior dining chair to our dining chairs to window ledges and the back of the sofa. Baby has no fear or concept of her more fledgling stage of mobility compared to Kiddo! So I found myself browsing Wayfair because I don’t think I can wait eight weeks of Baby fussing why I’m in the kitchen. Nor can I get to Coquitlam to pick up a toddler tower that won’t fit in my car that has two car seats so the seats can’t be folded down.

The variety that my sister showed me previously were on full display at one website, which is the beauty of the site, despite – what is it again? labour issues?

There’s the version that converts into a chair and table that doesn’t look particularly useful to me:

There’s the version that is foldable and super high rated (in the one review of options article I read):

There’s the version that looks like it’s made from crib scraps:

There’s the version that is non-adjustable but highly rated on Wayfair and classically, clean looking:

Then there’s the plastic version that doesn’t have any comparables, it seems: 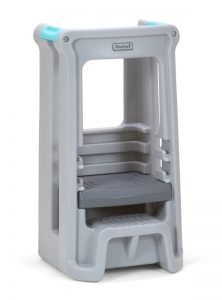 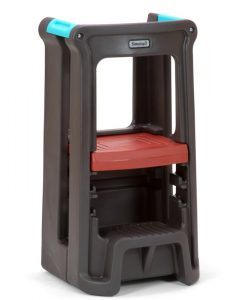 My birthday is coming up and Lil Sis offered to buy me one for my birthday and I didn’t want her (or myself) to spend too much and I couldn’t decide on which wood version and the Simplay3 (plastic) version is adjustable and then I saw the less institutional looking one in “espresso” with the pops of red and cyan colour and I was sold despite my initial ridicule of it. Afterall, my floors and counters are espresso colour too. It might blend in better than some whitewashed wood structure!

The quandry I resolved in a flash: all these Instagram-propelled ideal images of a natural-looking wood, hand-crafted Montesori-approved toddler learning towers made me have an initial knee-jerk reaction against the plastic version. I sincerely hope the product works out for me as successfully as all those IGers raving it’s a must-have in their house in which case I will get great use out of it and when I don’t need it any longer, it will continue getting use with another family. It’s not plastic that I discard after a single-use or after months of use like a shampoo bottle. It’s more used and useful than the toys we buy encased in plastic. So that is my conclusion.

While my sister’s order back in late January initially had an eight-week wait (four to six weeks longer than if you ordered before Christmas – business is good!), there is a further three or four weeks. Meanwhile, my delivery date was projected to be March 19 then March 22 then back to and truly March 19!

I waited one day before assembly, since March 19 was a Friday and all the other things we had to do. It was delightful to see it is made simply with five molded pieces of plastic and a handful of screws. It reminds me of the chunky plastic high hairs that my mum has at her restaurant and the kids use when eating during our visits to her house. They probably cost a small fortune when she bought them over 30 years ago and this toddler tower is so modestly priced! 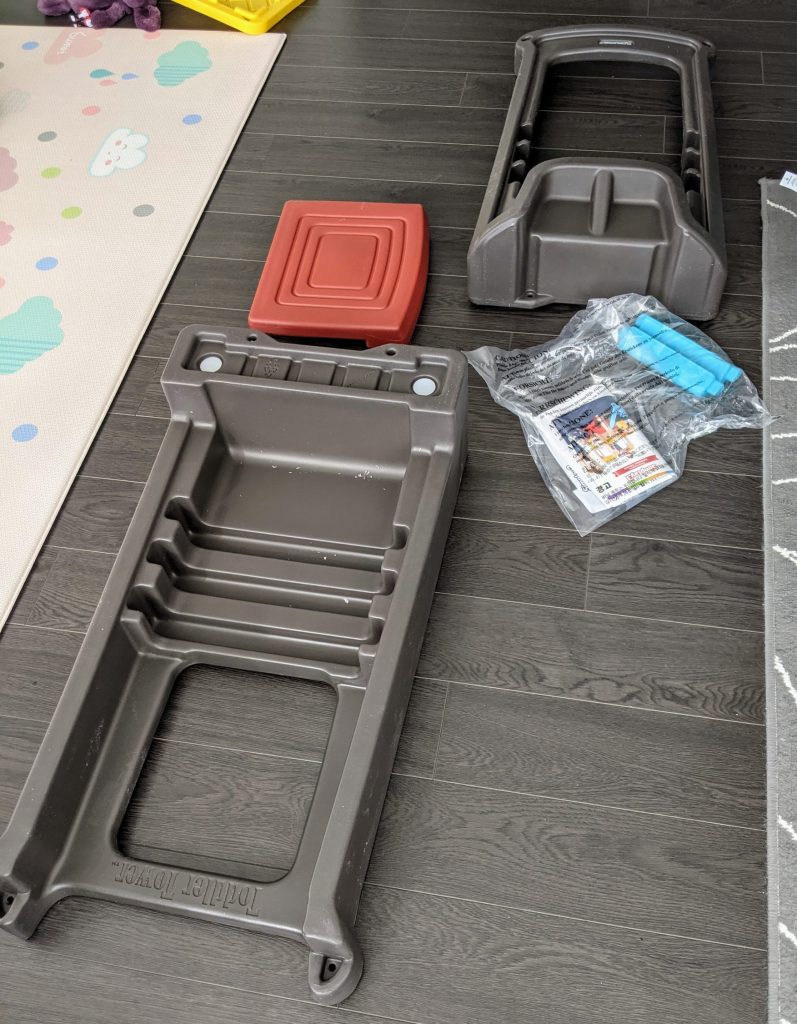 Just as I hoped, it kind of just blends in with our place! 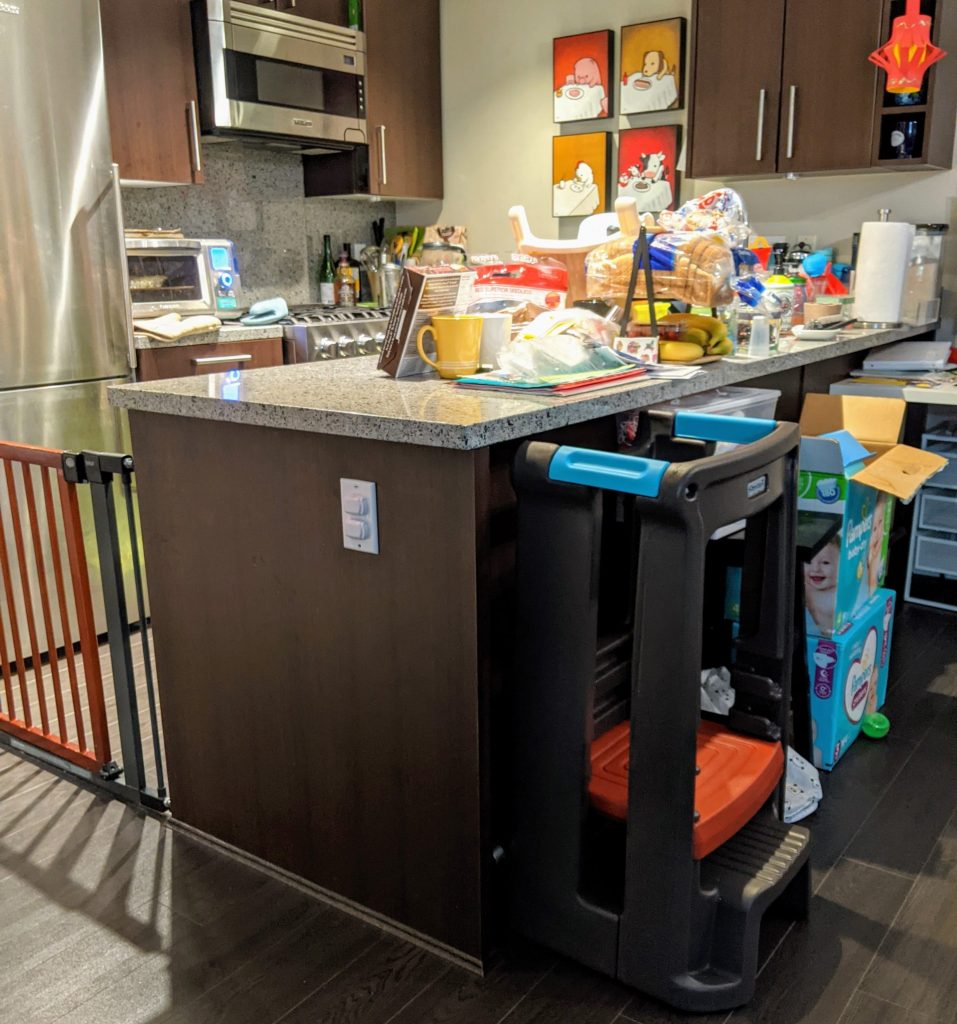 The other side of the matter is cleaning up my kitchen counter so it is a suitable surface that Baby will be able to access with the toddler tower!

Every so often, I take a photograph of the state of my apartment. It might be because I plan a re-arrangement or a clean-up and I take a photo to use as a “Before” photo. Or I know we’re not here forever and I want to remember this place that we really lived in. My sister said that she really wanted to clean up the counter for us but, you know, Covid restrictions. The best, of course, is for me to figure it out for myself. It makes sense that that is how the change would stick.

Funny thing is that once I started tidying the counter, it’s like organization was a mindset and I was obsessed with making more progress. There are some “stumbling blocks” that I couldn’t figure out immediately, where the solution would be more like a place to hide things than a logical home for some things on the counter. And I was motivated to make a (small) dent into the mess on the sideboard. Cleaning the kitchen counter has the nice effect of tidying and organizing other parts of the kitchen too.

This isn’t even as messy as it ever was. 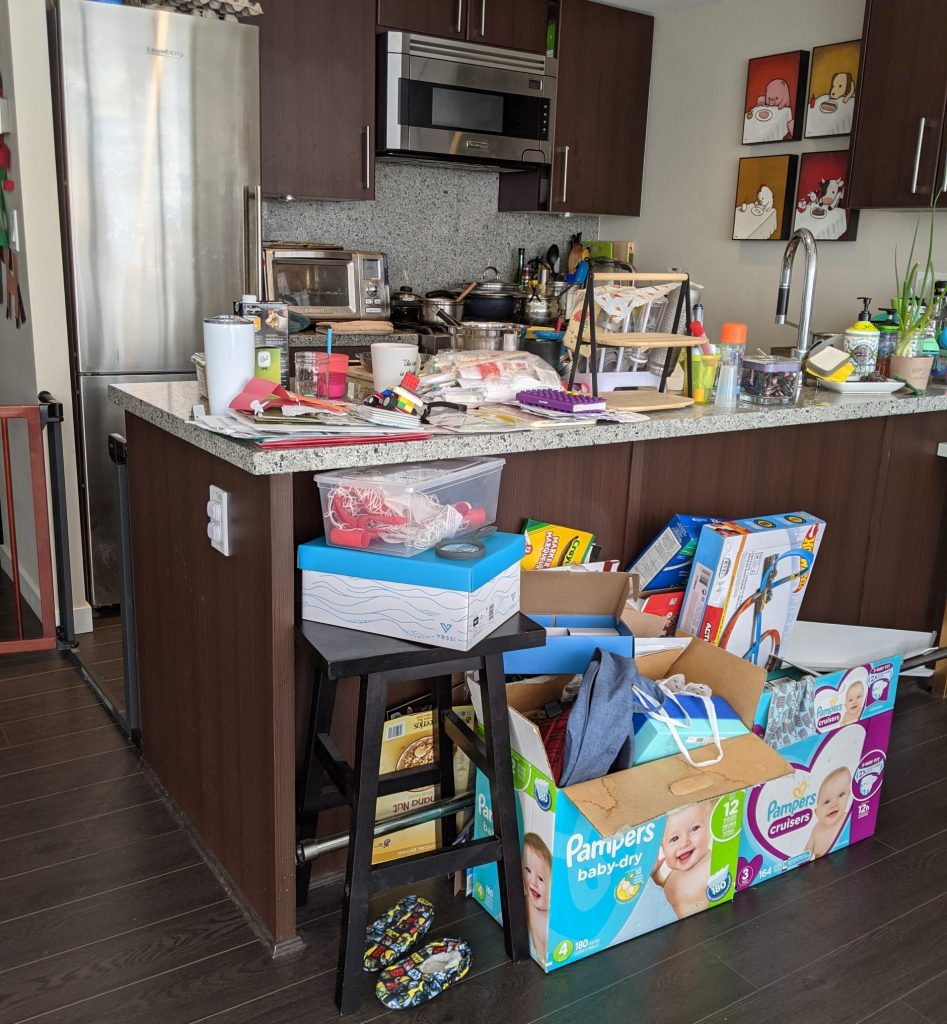 As good as I got it. 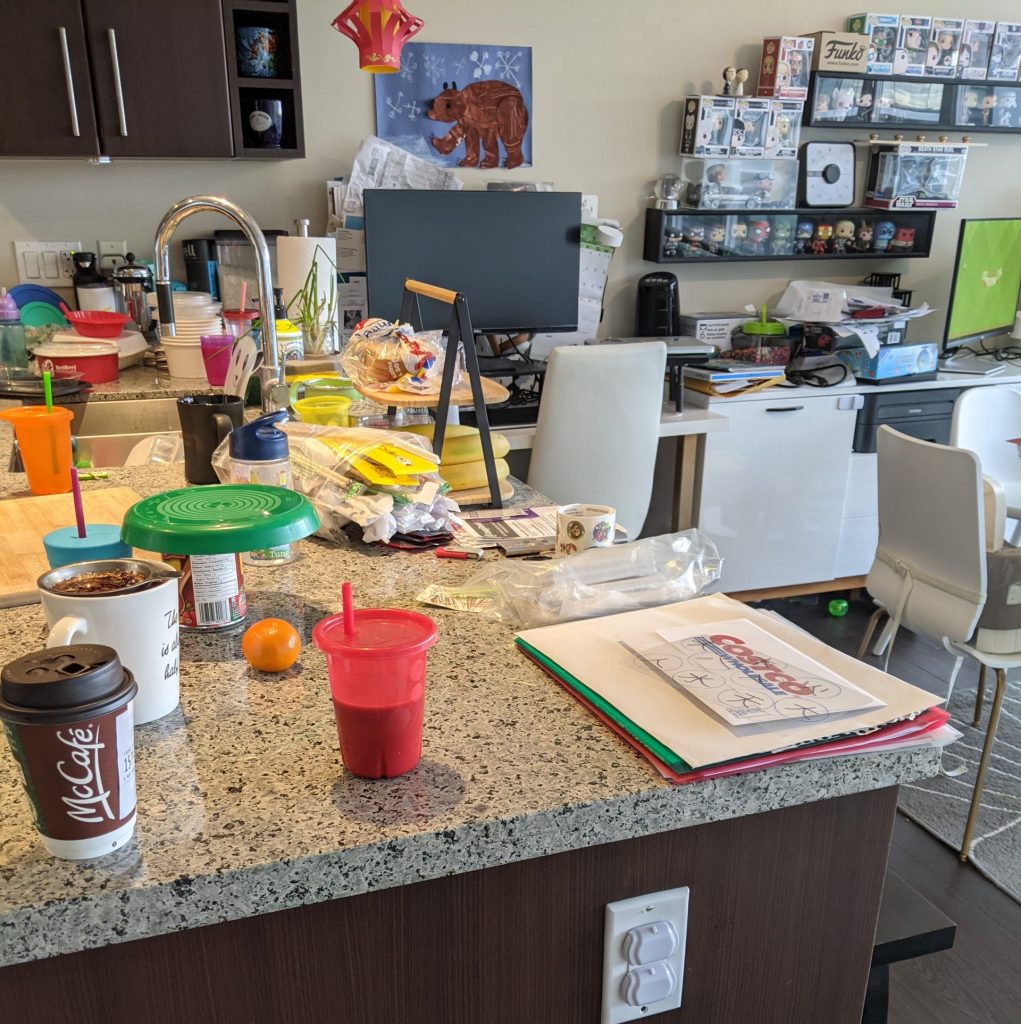 Keep a clear space out of Baby’s arm’s reach. Instagram: the tight angle to make it look perfect vs Reality: the mess at the other end, out of her reach.