It feels like Hallowe’en was so long ago and I’m just behind in everything.

Hallowe’en 2020 consisted of heading downstairs and partaking in Kona Baby Boutique’s neighbourhood celebrations with MY and hanging out in the square. For the first time, we spent Hallowe’en with in-laws and their preschool-aged child. It was six months into Covid so they trick-or-treated at three houses, friends in the neighbourhood. It was a family evening thereafter.

This year, with Baby’s nap in the middle of the day, NPY took Kiddo to the Mount Pleasant BIA celebration in the afternoon and when Baby woke up, we went downstairs to the Kona event. In the evening, we went to the usual Cambie-hood we hit up but instead of the childhood friend Kiddo has spent most Hallowe’ens with, he went trick-or-treating with his classmate. The kids are in grade 1 this year and it seems that they are aligning with school friends more and more.

Kiddo continues to attend tae kwon do classes and is a six-year-old green belt, more advanced in belts than I had gotten. And over the past year he has learned about and obsessed about LEGO Ninjago, watching the series on Netflix and owning several LEGO sets. I use his interest in being a ninja to convince him to apply himself and practice TKD.

After reviewing some photos and videos, making a Ninjago costume wasn’t going to be overly difficult and the base clothing was definitely clothing that he could wear later.

1. First, I cut strips from the green t-shirt, hacked them up. Ideally I wanted to just wrap the strip around his arm or leg and tuck in, but ended up sewing them loosely to his hoodie and pants.

2. The back logo – I basically followed the design The Costume Kid created but I was using different materials. It was a fun mini-project one afternoon two weeks out from Hallowe’en when Baby was napping and I was able to introduce to Kiddo practical uses for a compass and protractor, how crispy angles make all the difference. The glittery seal was stuck onto black foam so it “can be used again”. 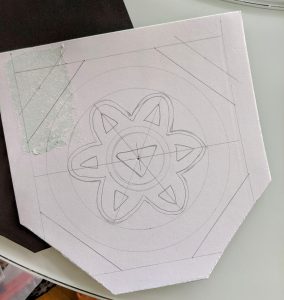 3. Martial arts jacket – when I wasn’t thinking too clearly, I thought I might affix the green board to his hoodie (loosely) but as I deliberated more, I decided to turn a black t-shirt into a vest (sleeveless) and adorn the wrap look on it. Kiddo could remove all of it at once… carefully!

As a trial run, I made mine (teal) first and my drape collar “white shirt” under was so haphazardly done but I think with the silver glitter foam (Kiddo insisted) and some more care, I created a great cross-over effect. 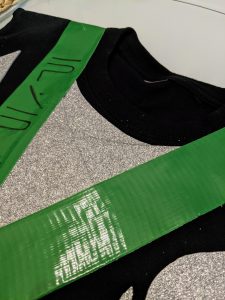 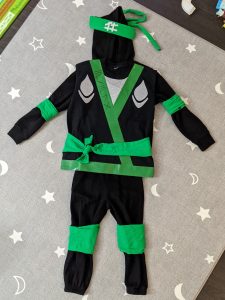 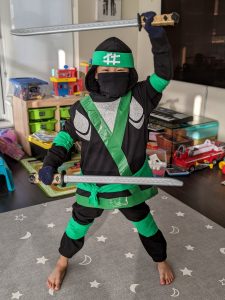 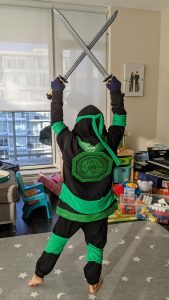 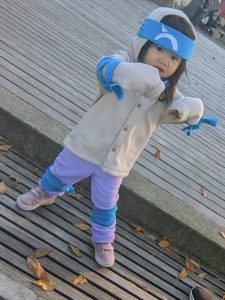 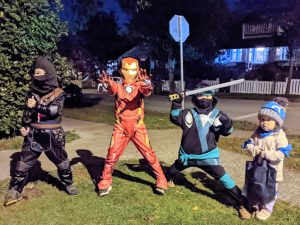 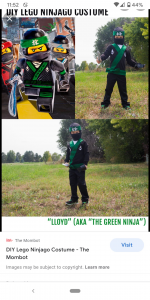 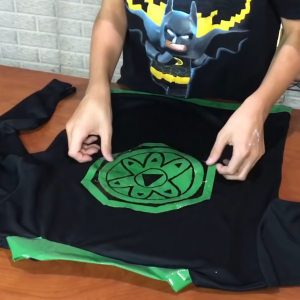 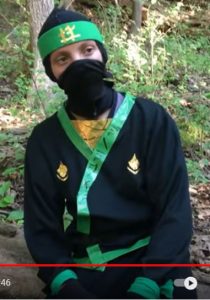 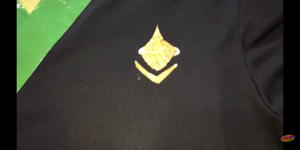