Last Sunday, NPY went golfing at Swaneset with his brother and brother-in-law and a friend, a prize his dad won last year a Christmas party. Their tee time was at 10:50 which meant he had to get to his brother-in-law’s (which is NPY’s parents’) place by 9:30 or so so I said he should take Kiddo with him and I’ll walk with Baby in a stroller from our place in Olympic Village to my in-laws east of PNE in the area I believe is called Hastings-Sunrise.

There was a bit of naysaying when I announced it. “It’s so far!” “It’s so sketchy.” “Why?!” Because I haven’t done it before. Because it’s one of the best ways to soothe Baby to sleep for a while. Because it’s good exercise. Because it’s a great way to see the city. To get some errands done. To swing by some of the murals and painted electrical boxes that I see when we whiz by on Hastings.

I wasn’t feeling so keen when I finally wrapped up errands and set out at 10:48 am. The direct route was some 5.8 km and should take 1 hour 11 minutes. I wasn’t in a rush but the wind had left my sails a little.

In short time, I was off the familiar Seawall path and walking into Chinatown along Keefer. At Main, I start heading east on Pender. This way, I passed by my cousin’s 2.5 restaurants. Also, Pender is chockful of food providers we enjoy like mello (donuts), Umaluma (dairy-free gelato), Manpuku (Japanese eatery specializing in bento boxes), Kissa Tanto (Italian and Japanese inspired), Vegan Supply (grocery store)!

I stayed on Pender until Heatley and came across the Mau Dan Gardens Co-operative Housing complex which felt like a piece of China re-created in Vancouver. I also passed by Lord Strathcona elementary which two of my friends’ kids got into but passed on. I can see how it was a stately school in the past and can’t help but compare to the wooden single level structure that is Kiddo’s school.

At Heatley, I turned towards Hastings because I knew that some artwork that I had only seen from the car started there. Further, I wanted to return some super overdue books at nə́c̓aʔmat ct Strathcona branch which indicated After Hours Book Drop would be available … but it wasn’t.

I was zipping around and doubling back because I realized that the Vancouver Mural Festival murals in Strathcona that I hadn’t before seen and the new ones just completed were in that area, just one block north of Hastings. 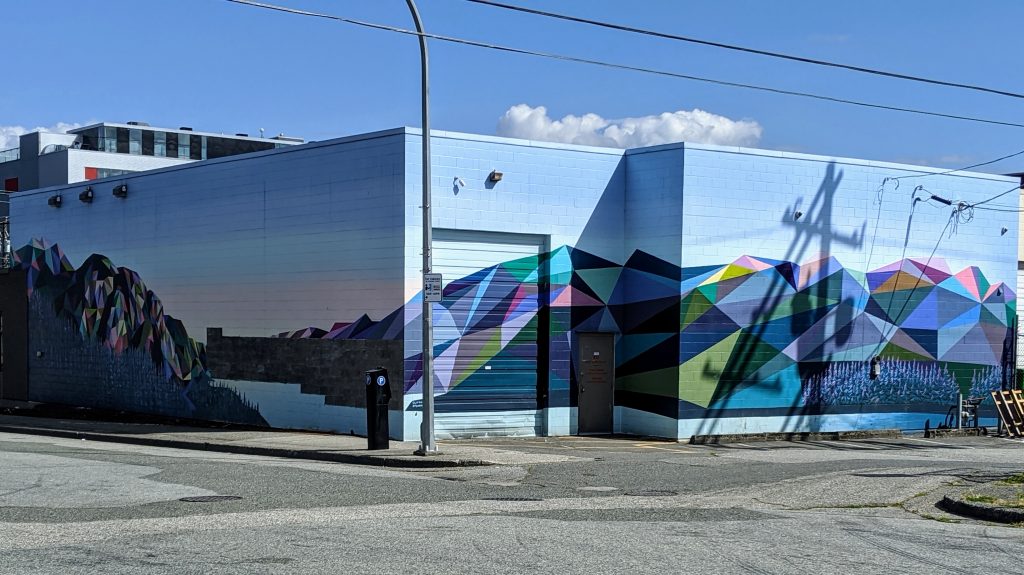 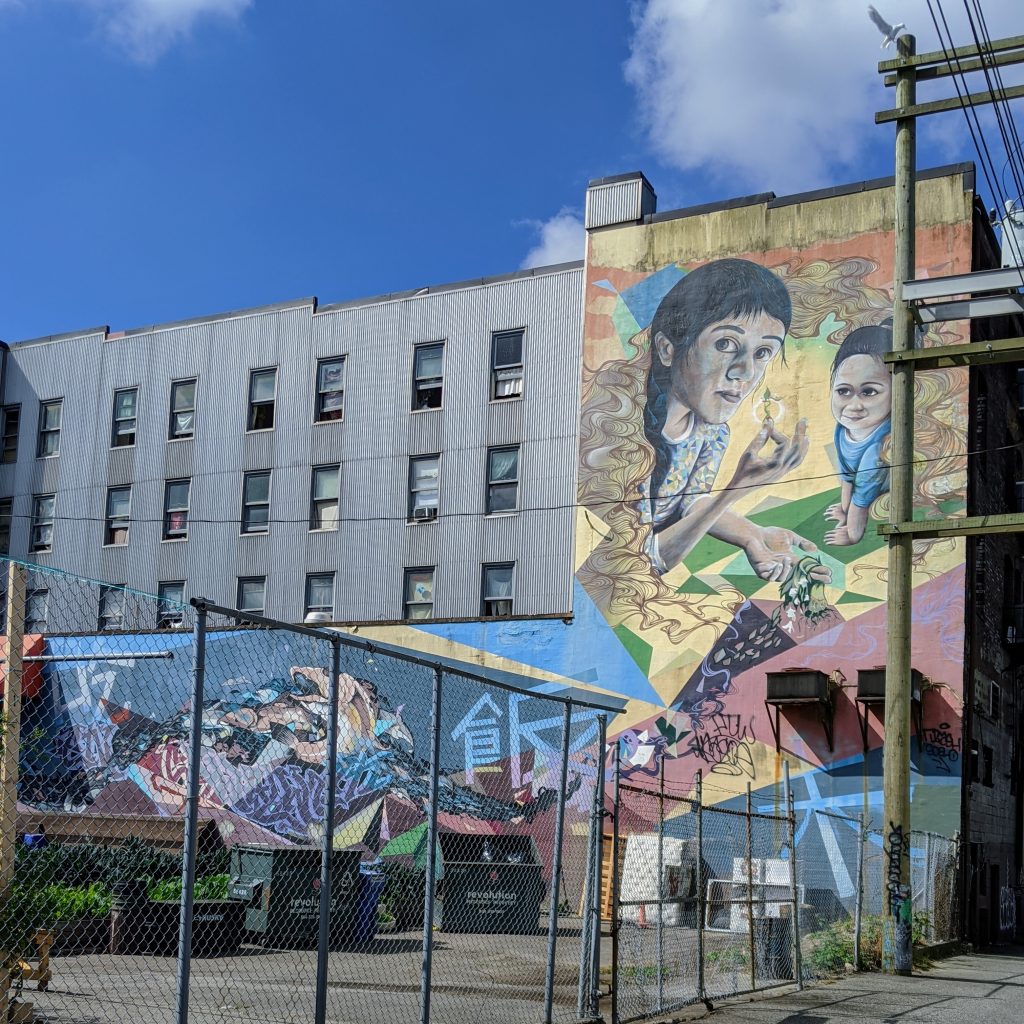 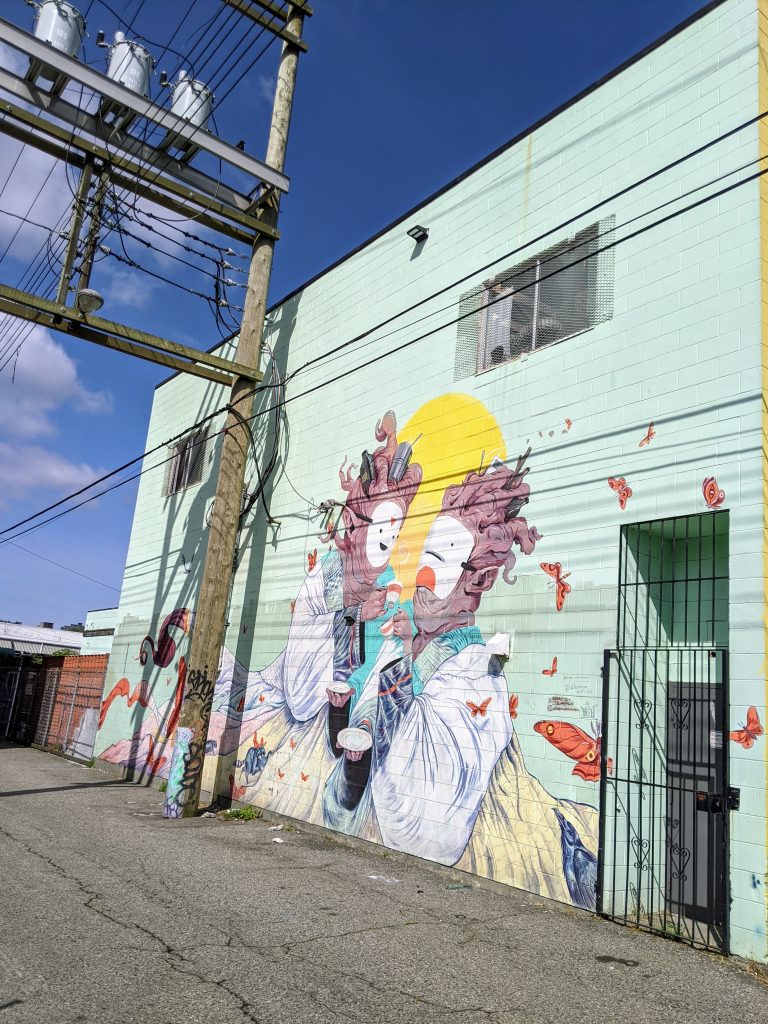 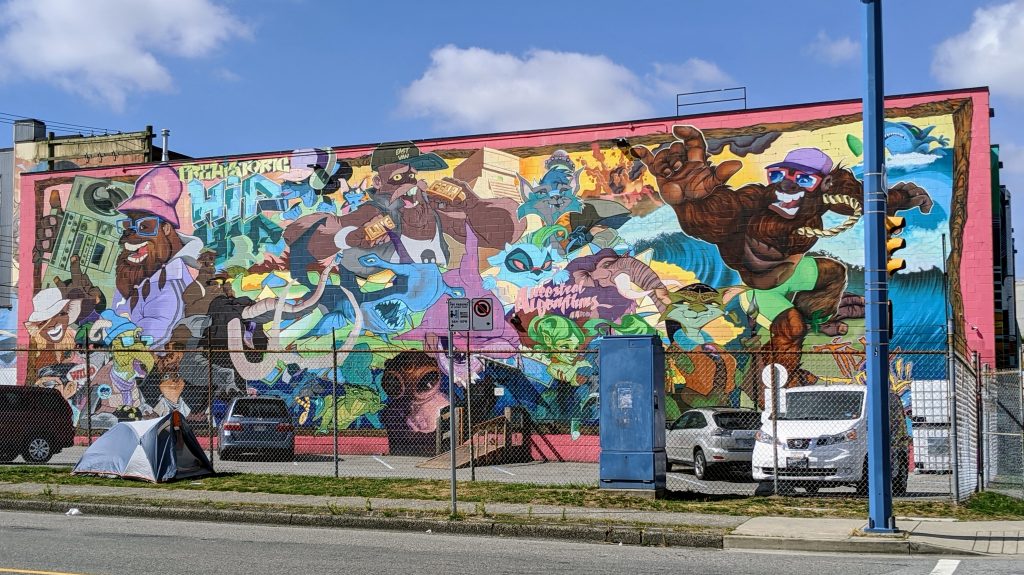 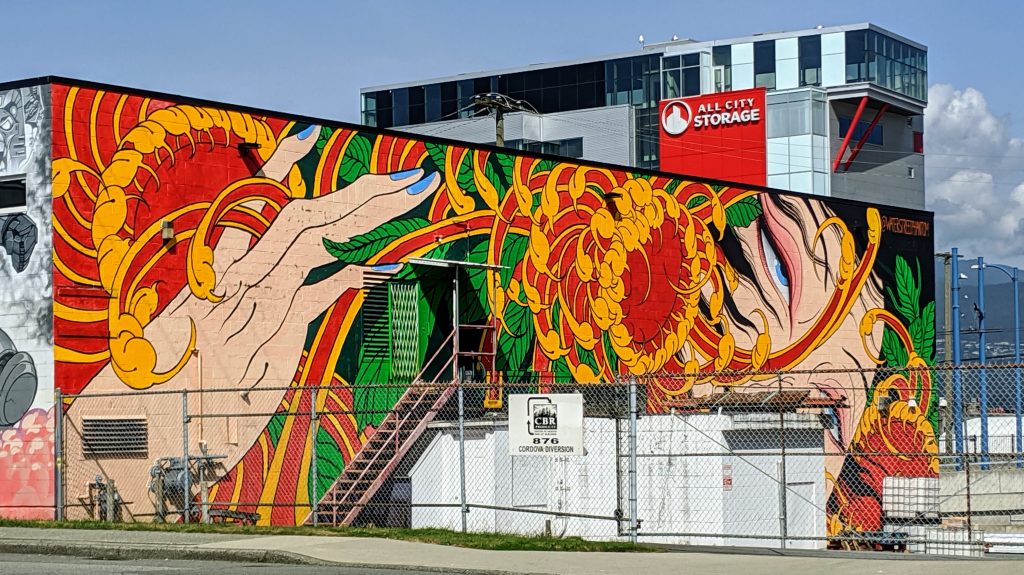 Down at the end of that block …. 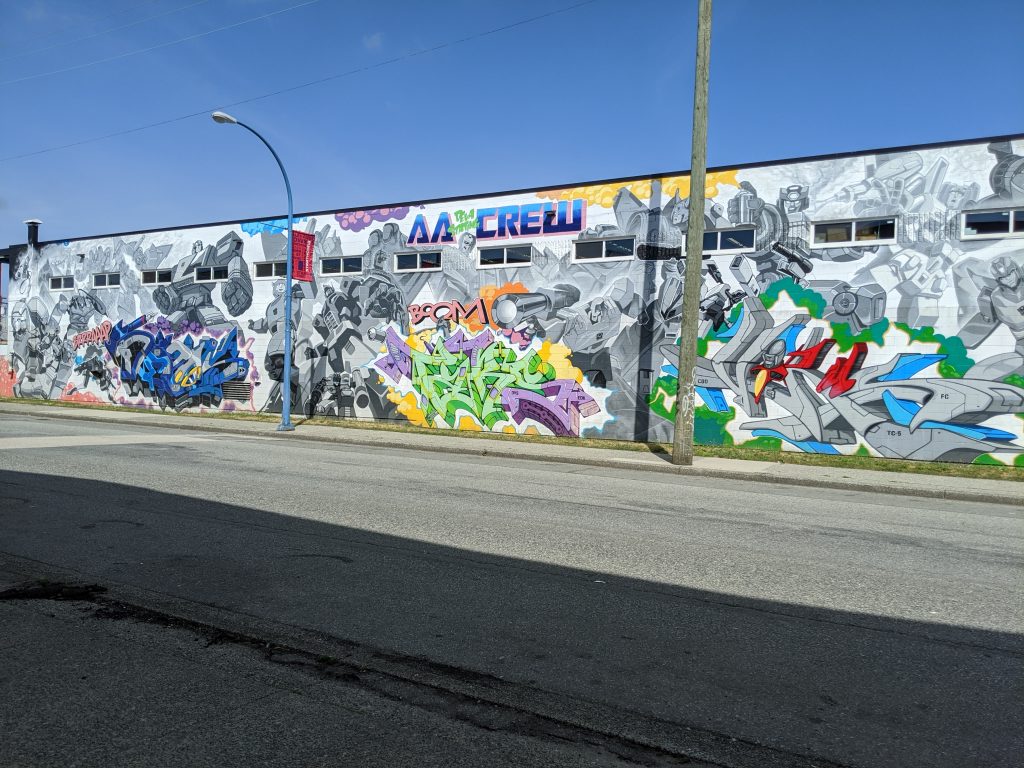 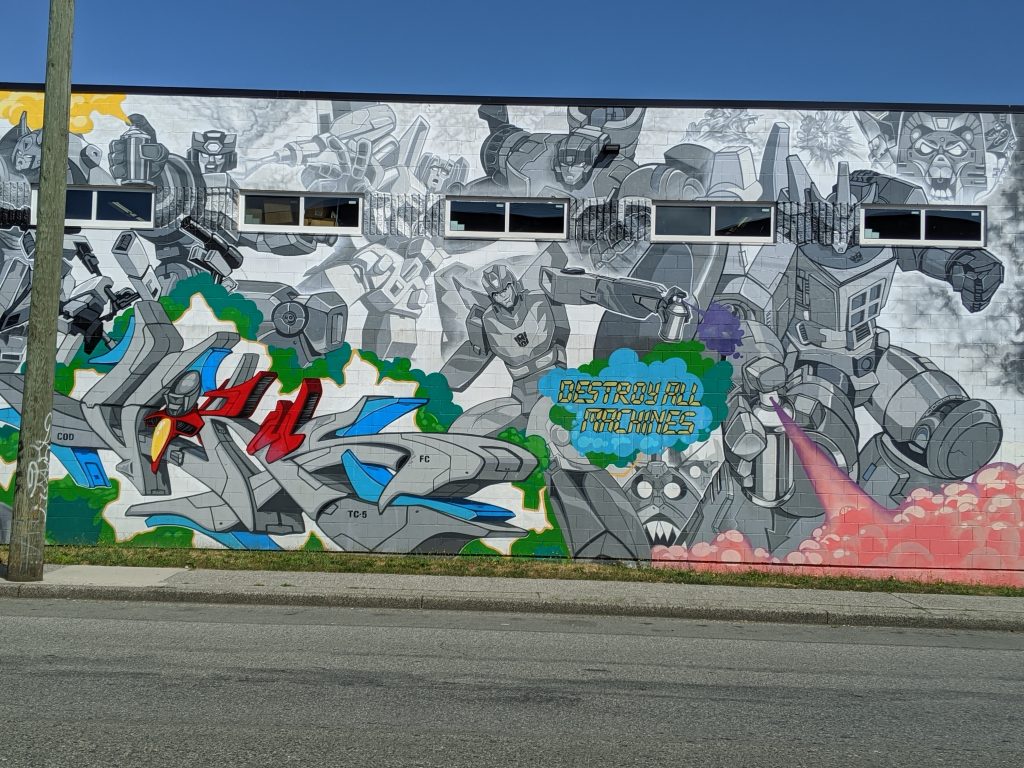 Then I turn around and see this awesome Transformers mega-mural. 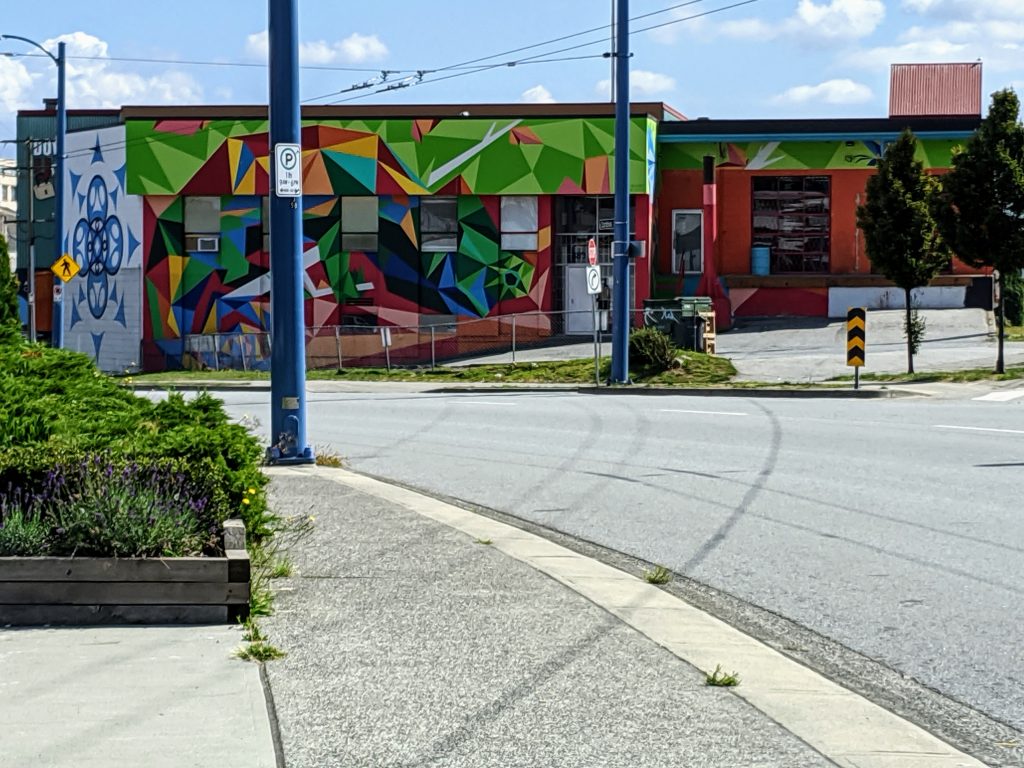 When we drive on Powell and see this colourful building, I want to stop and it’s such a teaser for what this neighbourhood holds. 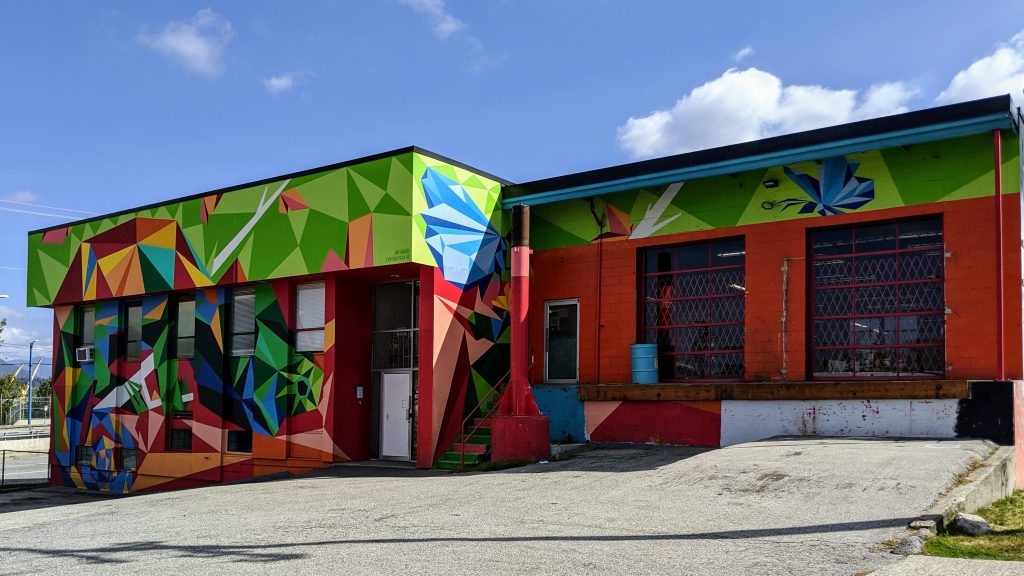 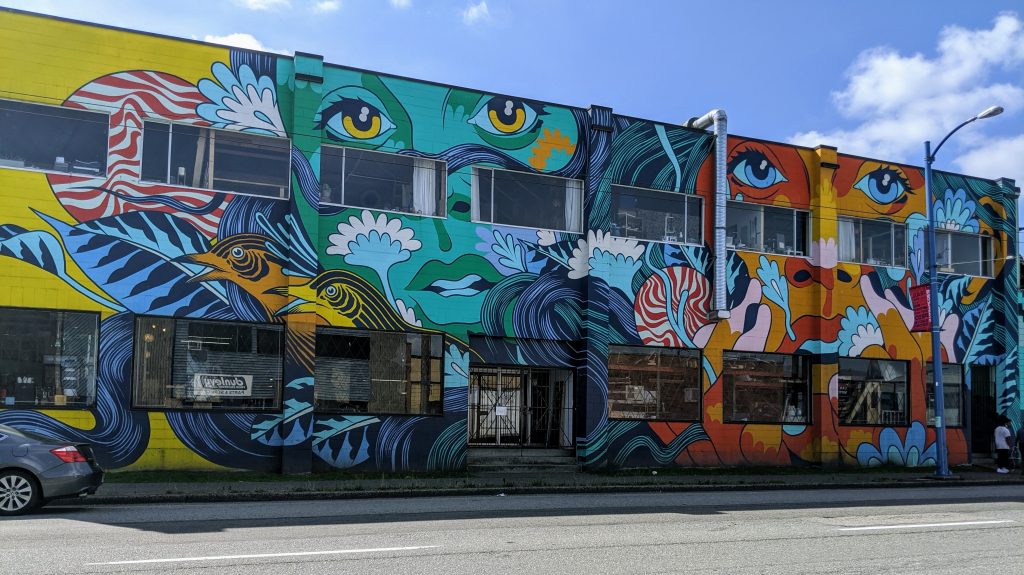 Just around the corner 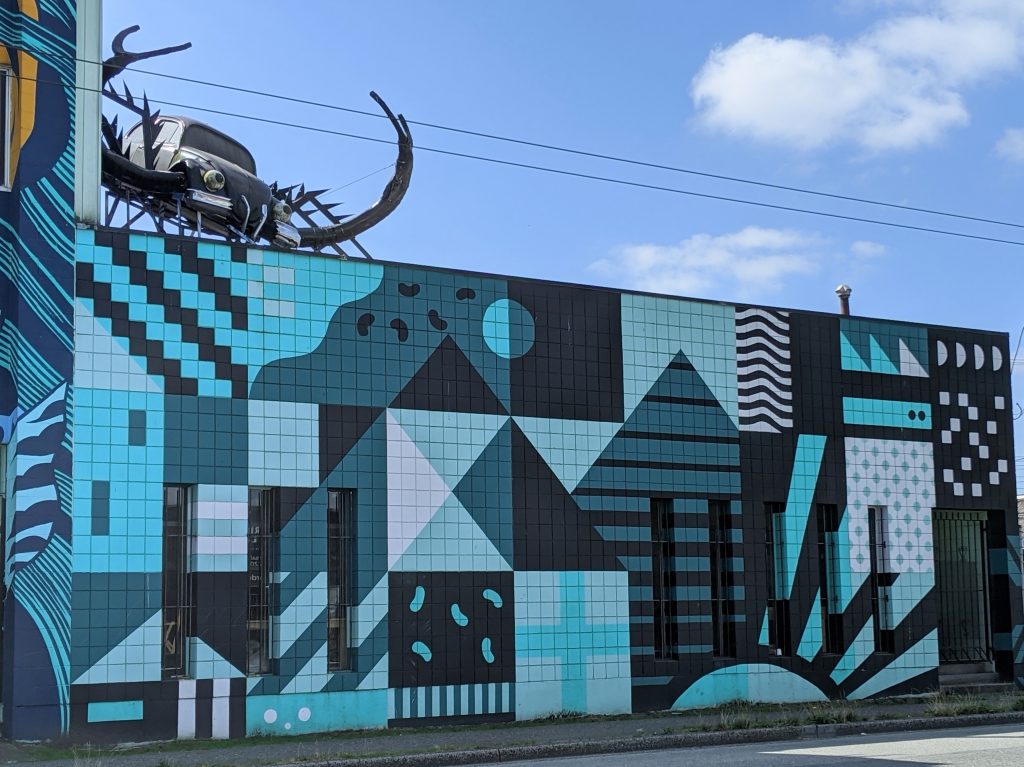 You could tell which other people were also there for a mural walk. 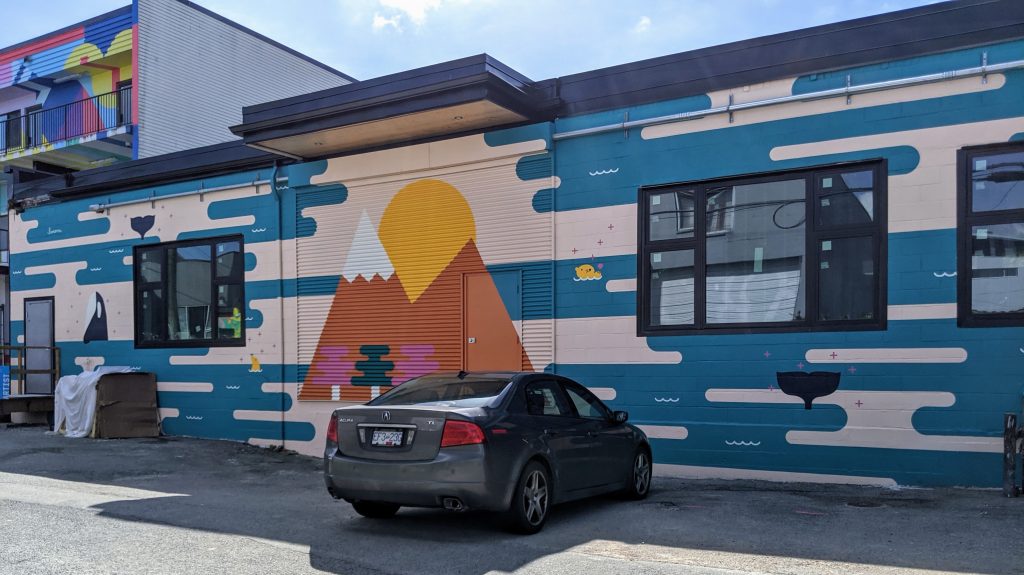 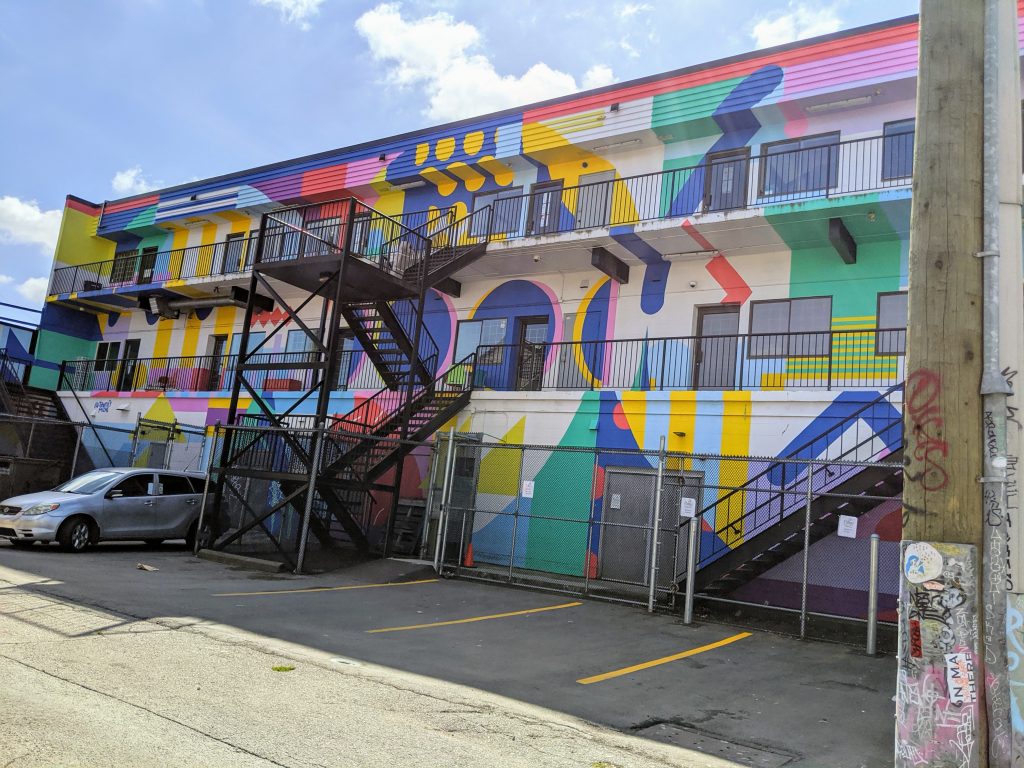 I’ve seen artist Tierney Milne repost this one but never seen it before in person. 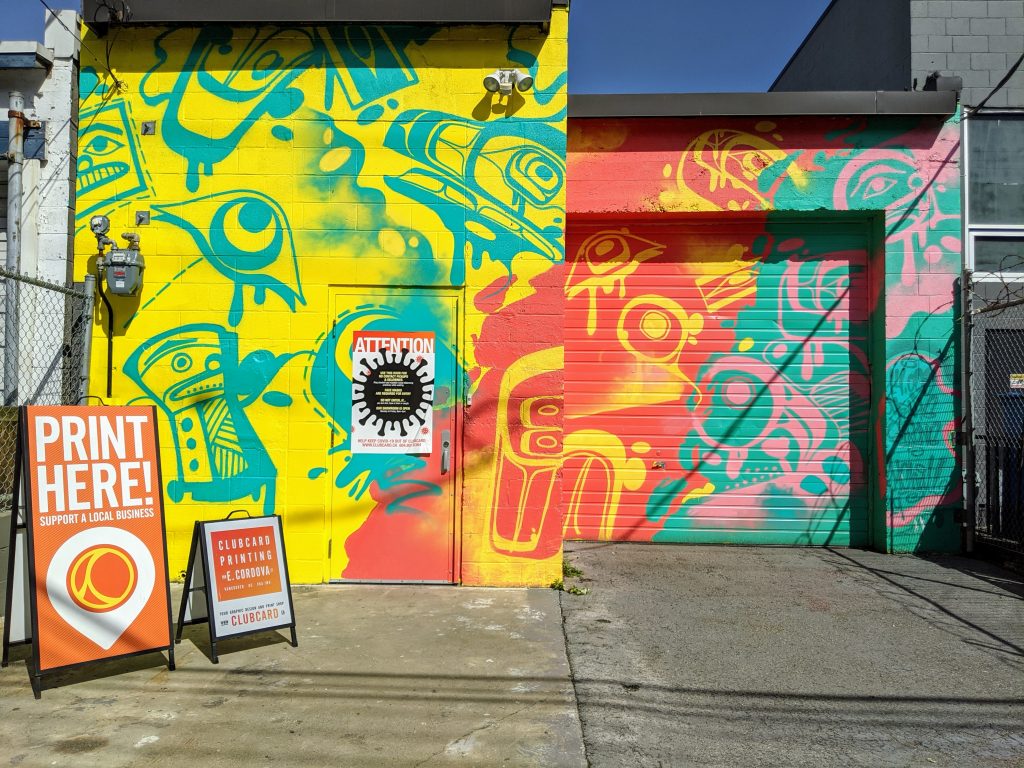 I stuck my phone through a gap in a fence to take this photo without fence in it. 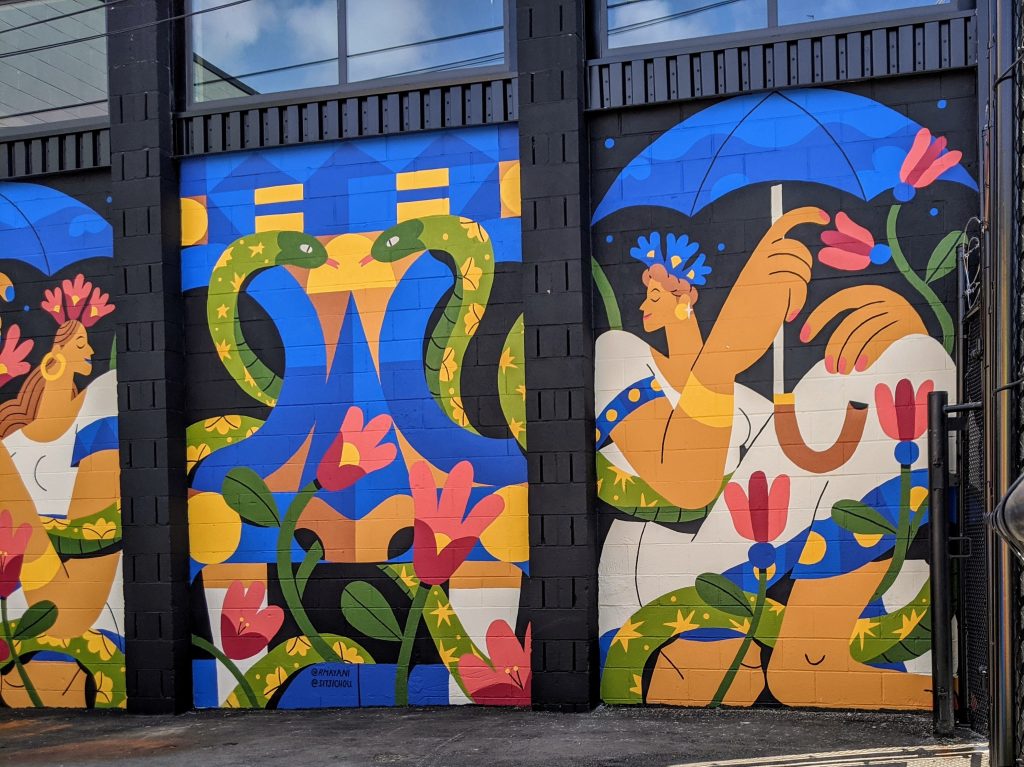 I stuck my hand through another fence gap but didn’t catch the full width of this beauty. 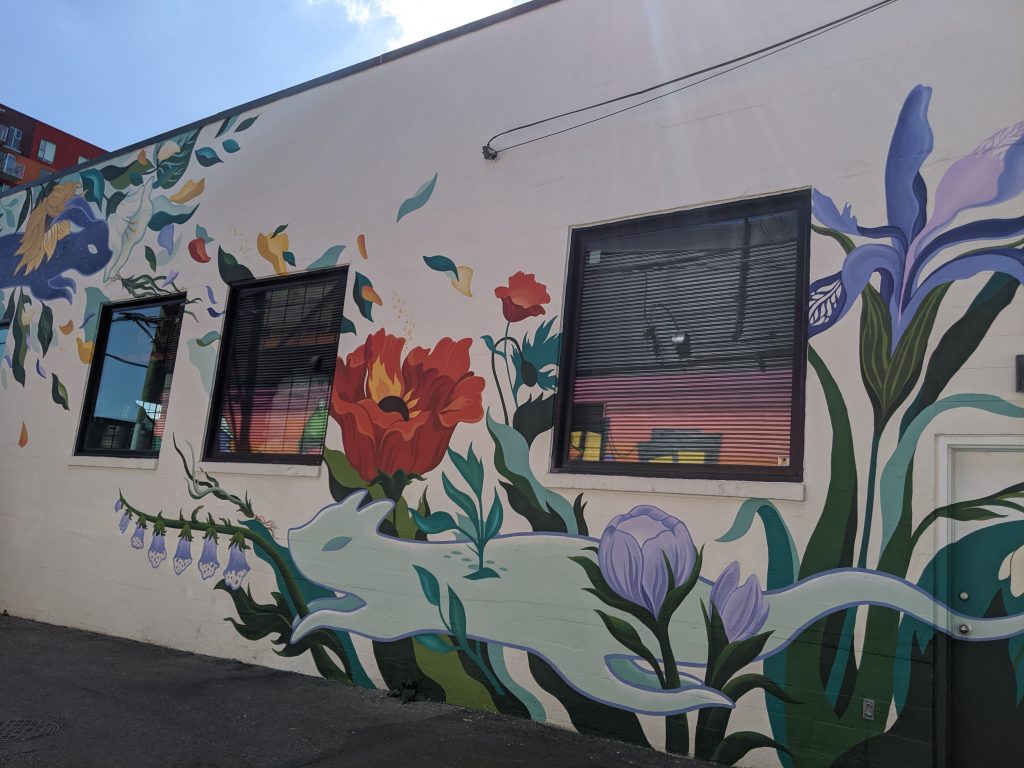 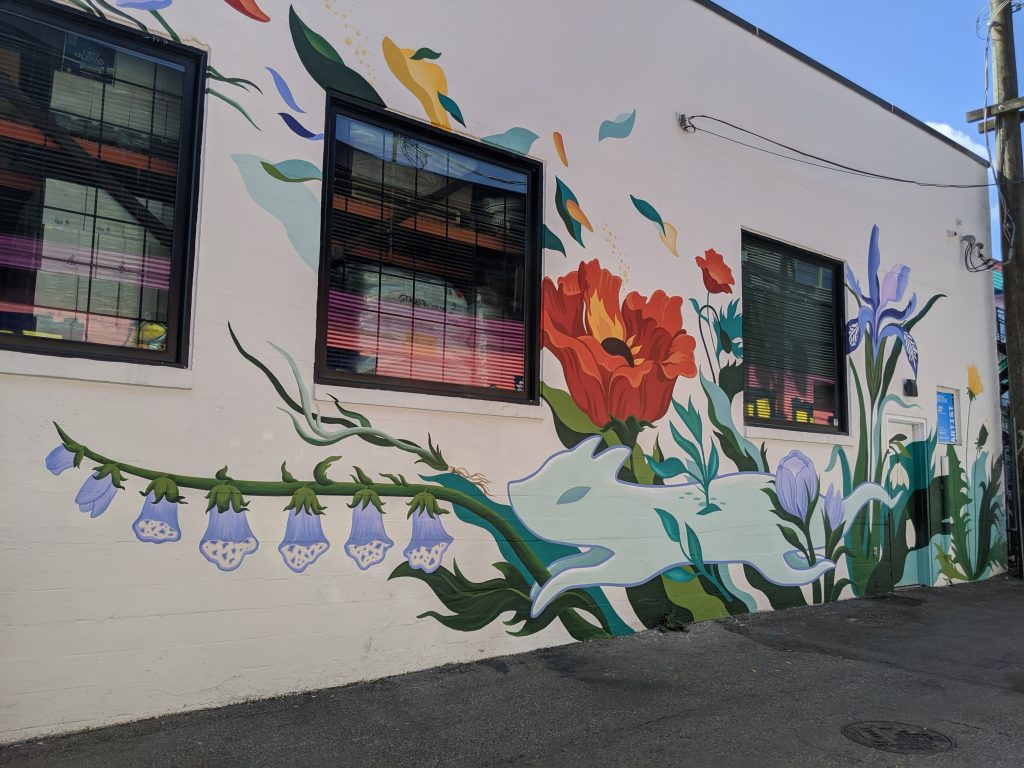 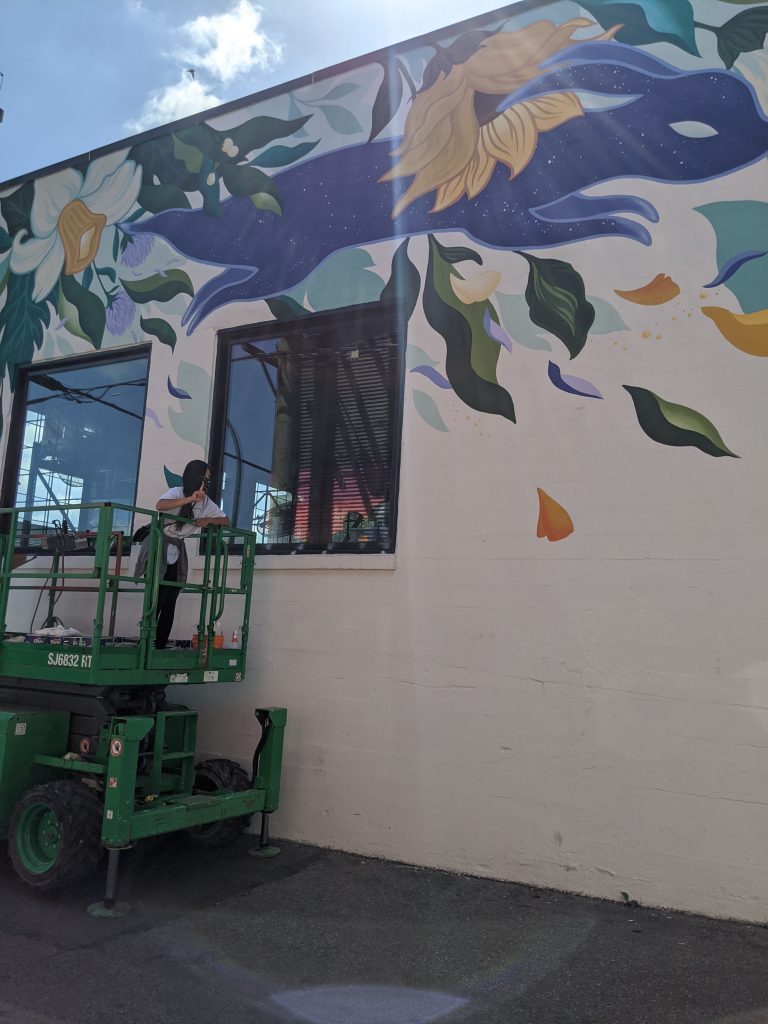 For this one I saw the artist still at work 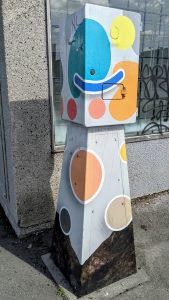 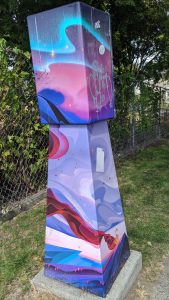 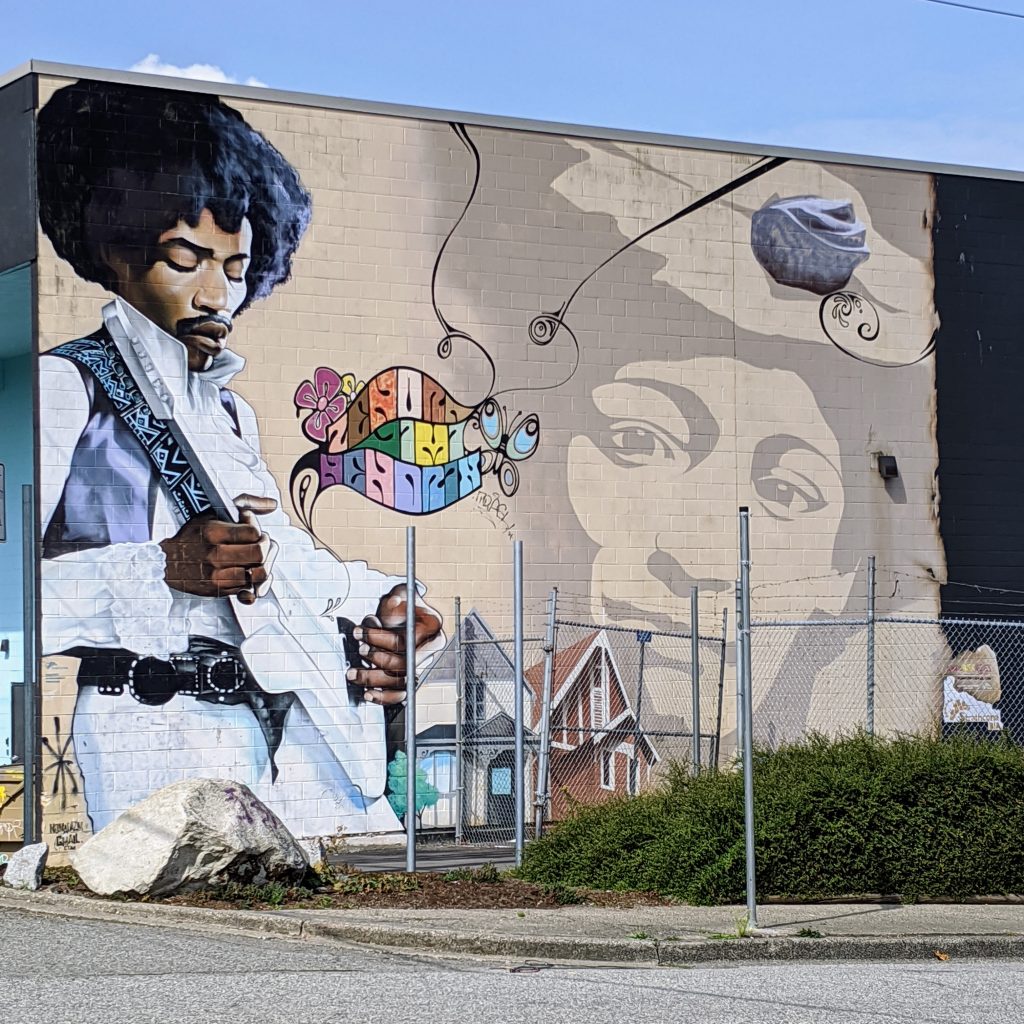 I was going to pick up some mochi muffins from Yama Cafe to give to NPY’s parents but it turns out the cafe isn’t open again until Tuesday. So I continued on Hastings and saw more murals (not VMF) and popped into Pine House Bakery for some treats for the in-laws and then to Chatime for a tea for me! 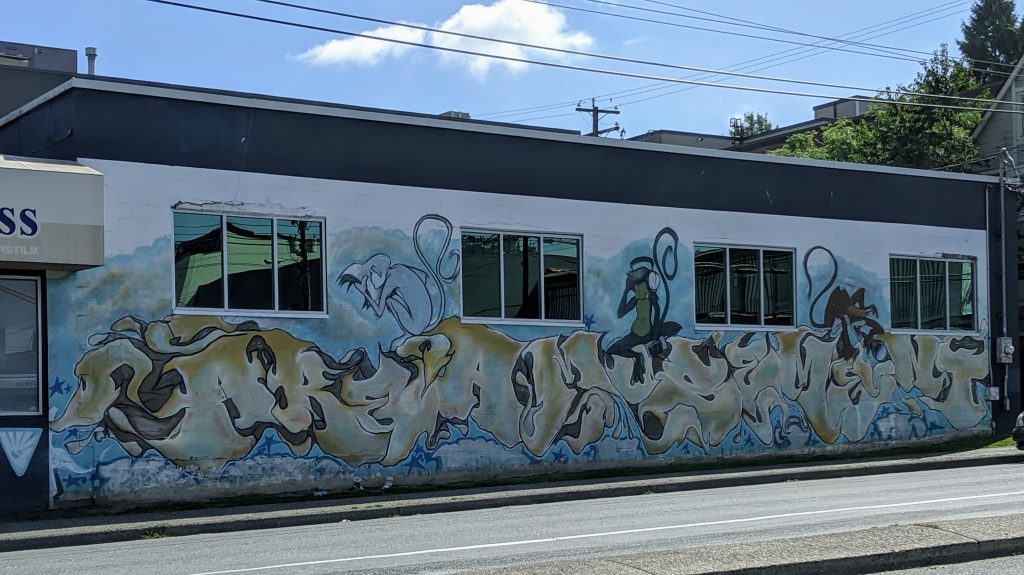 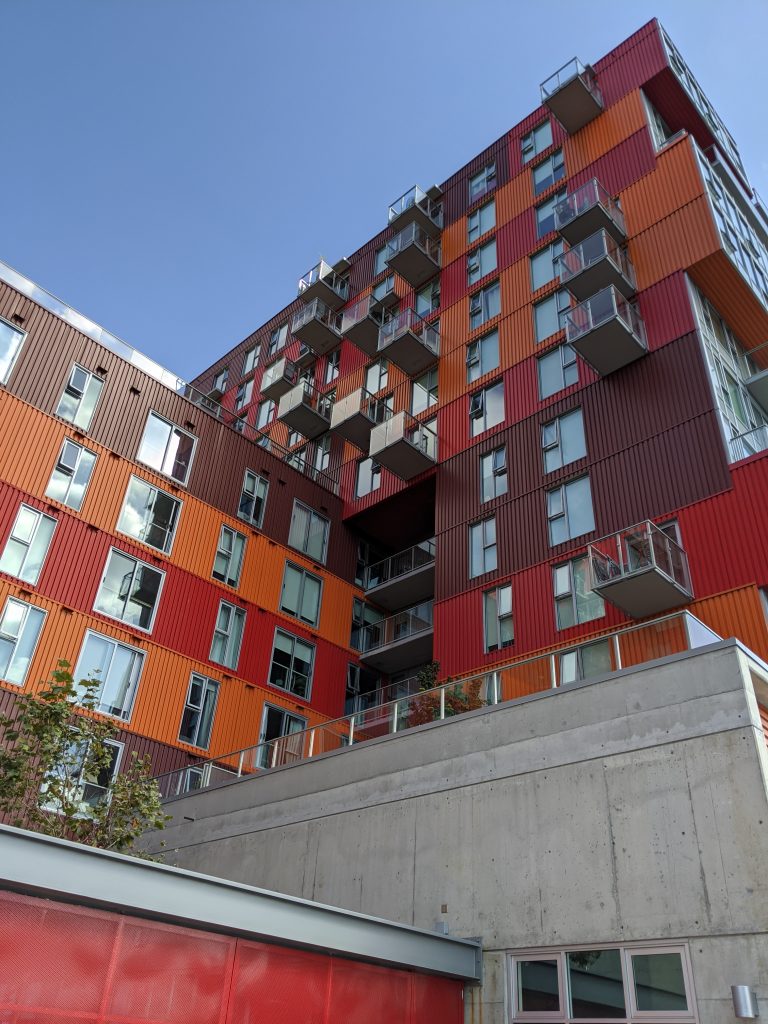 I could see the grandeur of these otherwise eyesore brilliant condos. 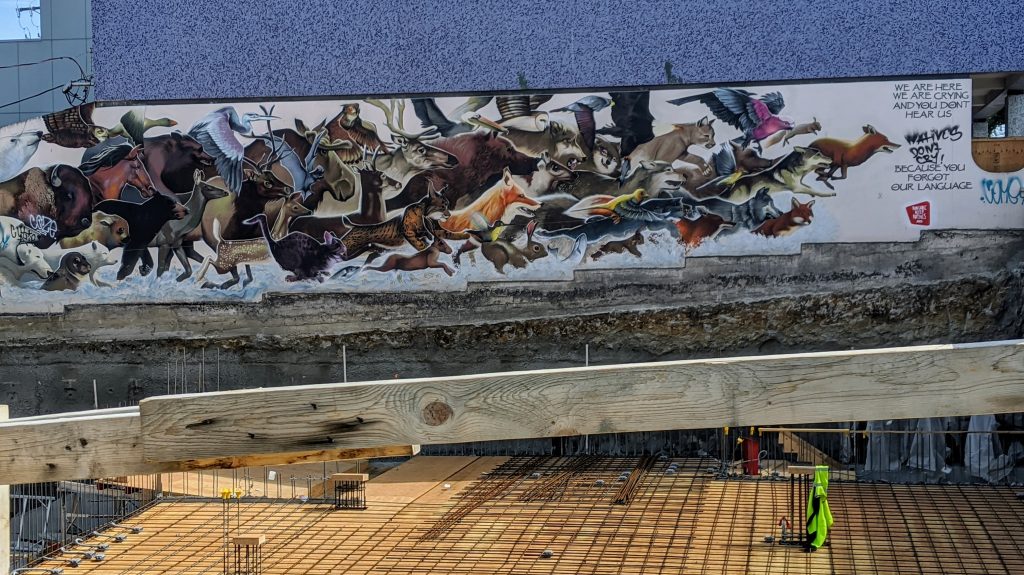 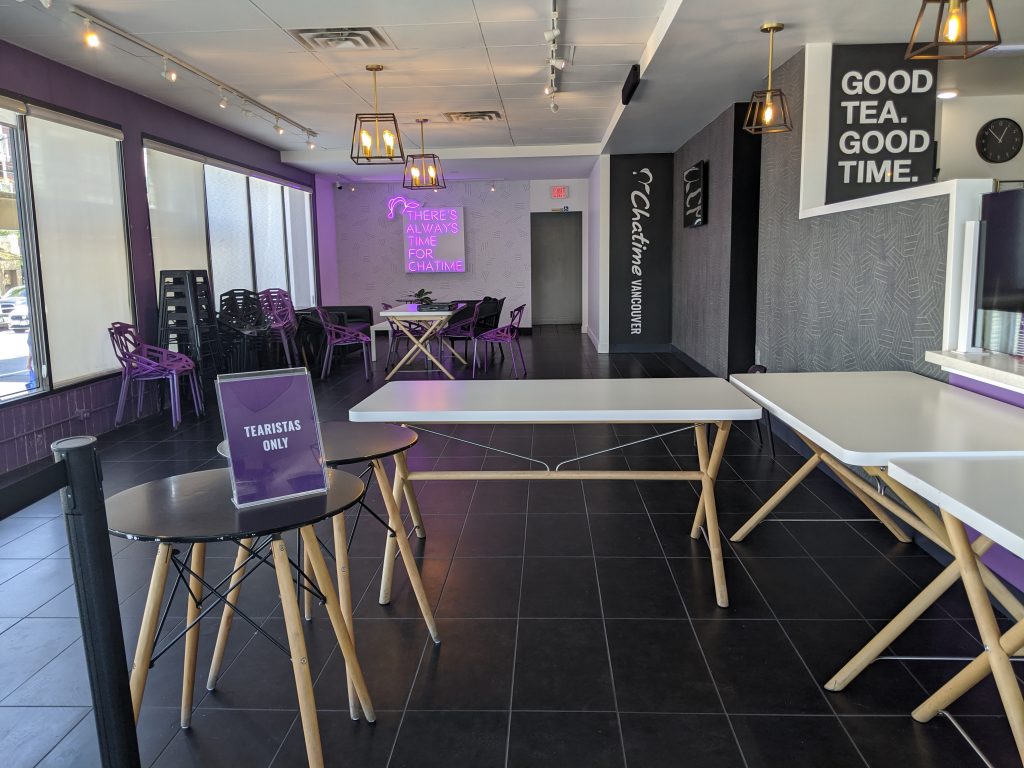 All in all, with stops to feed bites to Baby and backtracking to photograph murals, I did not arrive at the house until after two hours after I set out. No problem, it was a super pleasant way to spend the morning and see the city.